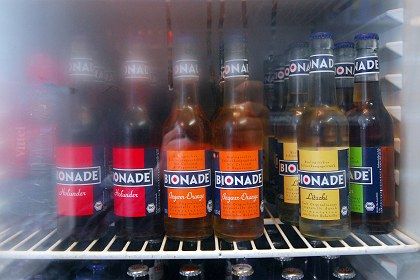 The look of success.

It's a success story that sounds suspiciously like it might have been conceived in Hollywood. An entrepreneur sees that his family business is failing; spends years and virtually all the firm's money in developing a new product; and finally, 20 years later, his vision becomes a runaway hit.

But you won't find this story on the big screen. Instead, you'll have to head for your local beverage aisle. Bionade, a smooth-tasting organic soft drink, has taken Germany by storm. And it now stands to conquer the world.

"Germany is now too small for it," says Jens Pollmann, a PricewaterhouseCoopers consultant specializing in beverages. "It's only option is to expand internationally."

First, though, Bionade has to catch up to demand at home. Since 2003, the company has seen annual production growth of a massive 300 percent. This year it plans to produce 200 million bottles, up from 70 million last year -- already 10 times more than the 7 million bottles produced in 2004. The staff has grown too; Of the company's around 150 staff, 100 have been hired in the last year. The company refuses to give out profit and sales figures.

The company has been struggling to expand its production facilities quickly enough to keep up with demand. "It's been a permanent construction site here in the last three years," says Wolfgang Blum, a marketing expert at Bionade who helped kick off the growth explosion.

Most Bionade drinkers in Germany -- overwhelmingly from the hip, healthy, hairspray set -- would be surprised to learn that the drink has been around longer than just a couple of years. Indeed, some shelves have been stocked with the stuff since 1995, but few consumers were interested in the boring, health drink.

But in 2000, newly-hired Blum began a makeover, eventually transforming the drink into a must-have with its retro yet enviro-friendly appeal. The flavors -- elderberry, lychee, herb, ginger-orange and the new, sporty "forte" -- likewise have a cool, "you're drinking what?" sensibility. And the broadly-striped label, bulls-eye cap and 1920s-style font exude sophistication.

The re-launched drink hit the zeitgeist exactly, appealing to health-conscious consumers who were drinking less beer just as they were embracing organic food and drink. Bionade (pronounced "Bee-oh-nah-deh") soon became a firm fixture on supermarket shelves and behind the bar in trendy nightspots.

"Instead of selling it as an 'ecological' drink based on ideology, we appealed to a certain lifestyle," Blum says.

The drink itself is the brainchild of German brewer Dieter Leipold. Back in 1985, he saw that declining beer consumption was threatening the long-term survival of his family brewery in the small Bavarian town of Ostheim vor der Rhön. He thought the development of an organic, non-alcoholic drink for kids would be the answer to his prayers.

He spent years toying with different recipes before he finally discovered gluconic acid bacteria. Instead of turning sugar into alcohol -- like the yeast used in beer brewing does -- the micro-organism transforms sugar into gluconic acid, which makes sugar taste sweeter. Leipold was thus able to cut back on the sugar added to the final product and keep the calorie count low.

Now, of course, kids are no longer central to Bionade's business plan, having been replaced by German hipsters. Even they, though, are no longer enough to satisfy the company's thirst for success, and now Bionade is expanding internationally. It is already present in Austria, Switzerland, Scandinavia, the Benelux countries, Italy, Spain and Portugal, and is just now hitting the shelves in Ireland. But the company has its eyes set on a much larger prize: the US. The search is already on for a suitable American distribution partner. 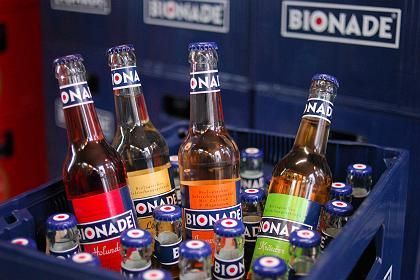 Bionade has successfully transformed itself into a trendy beverage.

Profits on the other side of the Atlantic, of course, are by no means guaranteed, warns PricewaterhouseCoopers analyst Pollmann. On the one hand, the country's size and diversity can make it a difficult nut to crack. Also, it can be very challenging for a family-owned company to cope with growth on the scale of Bionade's: Often a family firm needs to hire management expertise from outside the family if it wants international success, Pollmann says.

Still, he is optimistic. "It's an unbelievably good product," Pollmann says. "They've done everything absolutely right, from the product down to the trendy packaging." He goes on: "I think it corresponds to American tastes. You have German quality combined with organic ingredients. And there's still nothing comparable on the American market."

Too Successful for its Own Good?

But can Bionade get around the problems already created by its incredible success? Earlier this summer, delivery problems led to the drink temporarily disappearing from store shelves. Blum attributes the trouble to an unusually warm April, leading to unexpected demand and a shortage of bottles. "The problems have now been rectified," he insists.

Furthermore, Bionade faces difficulties from the sincerest form of flattery: imitation. The company is currently engaged in a court case with the supermarket chain Plus and the brewer Frankfurter Brauhaus over their "Maltonade" drink, which Bionade claims is a direct imitation of Bionade. Meanwhile German brewing giant Beck's is reportedly developing its own Bionade-style product. Other brewers are sure to follow suit.

A more serious threat may be self-inflicted. Bionade recently began advertising the drink -- a major change in policy for the company which had previously relied on word-of-mouth, viral marketing -- under the slogan "The official drink of a better world." Blum says advertising was essential now that the company is attracting competition. "We have to act to raise awareness as quickly as possible and secure the market," he says.

But will the bohemians who made Bionade a success be turned off by the new corporate style? Pollmann stresses that the company needs to watch its image: "You have to manage the brand very carefully and watch how consumers react to it." But he says the company does not have a choice. "It's so big now, there's no other way."

And perhaps Bionade will be the first German company to prove that organic doesn't necessarily mean small. "We never had the intention of being a niche product," explains Blum. "If you're going to take the organic idea seriously, then you have to make it accessible to everybody."