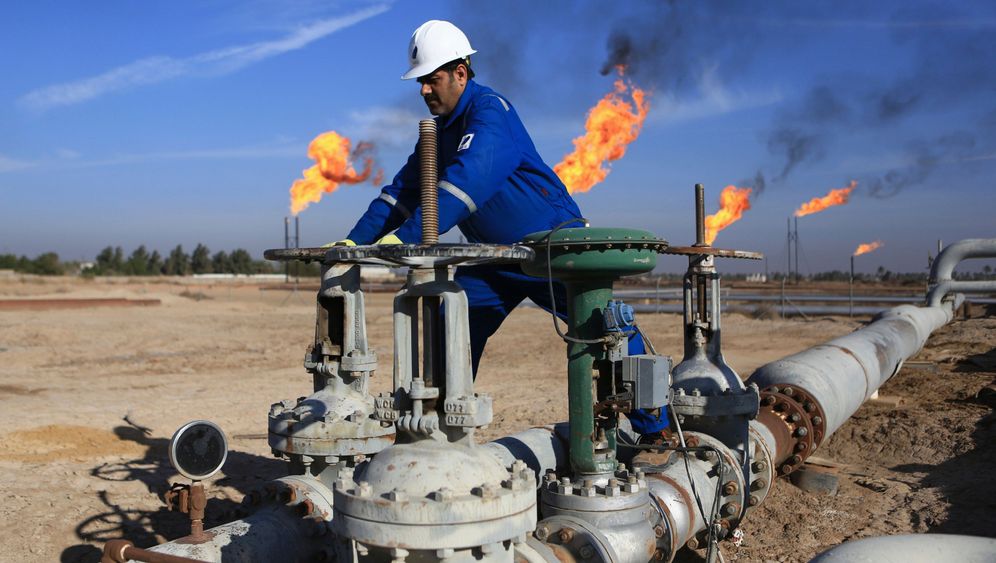 The 30-floor Renaissance Hotel is one of Dallas' most popular places to stay, with moderate prices and a swimming pool on its roof that offers a magnificent view. But when Edward Mason holds a talk at the annual shareholders' meeting of ExxonMobil there this Wednesday, it will be like walking into the lion's den. From the podium, Mason will set out to confront top executives of the American oil and gas giant head on.

At least Mason knows God is on his side. The Brit is the head of responsible investment at the Church Commissioners for England, which manages an 8.3-billion-pound investment fund for the Church of England. It's his job to ensure that the church invests its money as righteously and wisely as possible.

Mason invested in Exxon, but he's dissatisfied. Although the share price has been stagnating for years, his main concern is that Exxon has been stubbornly refusing to engage in climate protection. At the Dallas meeting, Mason intends to call a vote on whether Exxon should commit itself to concrete greenhouse-gas reduction targets.

His fund holds Exxon shares worth 8.3 million dollars, a drop in the bucket compared to Exxon's market capitalization of 320 billion dollars. But he has received support from pension funds from New York and California, big banks like HSBC and other investors, who together manage 1.9 trillion dollars.

Exxon has vigorously resisted this pressure and called on the U.S. Securities and Exchange Commission (SEC) for help in blocking Mason's proposal. The SEC ruled that the company doesn't even have to allow the motion to be put to a vote and has criticized the move as an inadmissible interference in the work of the board. Exxon is delighted to have the backing of the stock-exchange watchdog, which calls the proposed climate requirement an attempt to "micromanage" the company and argues that the move would exceed the shareholders' mandate.

Mason is disappointed. Now Exxon executives will get an earful in his speech in Dallas. Exxon continues to lag behind the rest of the industry on climate protection and is failing to properly engage with shareholders, Mason says, adding: "We are showing our dissatisfaction in the strongest possible way by voting against the re-election of the entire board."

It won't be the last vociferous intervention by the pious fund manager at the annual shareholders' meeting of a large corporation. The Church of England is at the forefront of an astonishing global movement. A growing number of investment professionals are urging companies to incorporate environmental and social concerns into their business models and to adhere to the generally accepted standards of good corporate governance. The investment buzzword is ESG, which stands for Environmental, Social and Governance.

As it becomes increasingly clear that climate change will have far-reaching social and economic ramifications, investors around the world are pushing for action. Industry insiders recognize the trend: "The supposedly soft issue of the environment has become hard currency in the world of finance. Companies that intend to survive in the future will have to demonstrate measurable success in climate and environmental protection," says Alexander Doll, CFO of Germany's national railway operator Deutsche Bahn, who notes "a rising interest from environmentally conscious investors."

Since the signing of the Paris Agreement on climate change, political pressure has also increased. European car manufacturers, for example, can expect to pay severe penalties if they fail to comply with the carbon-emissions limits prescribed by the European Union. The EU also wants to force institutional investors to be more transparent and reveal the extent to which they invested in companies committed to achieving ESG standards.

A Shift in the Investment World

Objectives that until recently would have been dismissed as do-gooder fluff have suddenly become a key component of the investment policies of many funds. Although there's nothing new about the issue of sustainability, today's investors are increasingly prepared to take a confrontational course on the issue -- if necessary by selling all their shares.

That's what happened to Vale, a Brazilian mine operator. After a tailings dam collapsed at a retention basin in the state of Minas Gerais January, more than 300 people were killed and a deluge of toxic sludge flowed downstream.

The Church of England immediately put its Vale shares on the market. Although the British fund had invested less than ten million pounds in Vale, other investors followed suit. The moral authority of the Anglican Church, which has about 85 million members worldwide, clearly exceeds its financial strength.

"Of course it is special when we as the Church of England take the lead," says Mason, who has been strictly investing according to ESG criteria since 2015. His office in London's Westminster district, which overlooks idyllic Green Park, is decorated with oil portraits of former archbishops, but otherwise the working atmosphere in the brick building is more reminiscent of a venerable trading company than a religious institution. Its financial performance is impressive. The assets of the church investment fund have grown on average by more than 9 percent per annum over the past 30 years.

The potentially biggest lever for exerting pressure on climate laggards is the Church of England's Climate Action 100+ (CA100+) initiative, a coalition of over 340 investors that collectively manage more than 33 trillion dollars. They are spearheading the initiative, along with the Dutch asset management company Robeco. The initiative focuses on the world's largest industrial polluters, the 100 corporations that emit two-thirds of all greenhouse gas emissions. The list includes Walmart, Airbus, BASF and Volkswagen, but it is dominated by oil and gas companies.

"There will always be gas and oil producing companies, but they have to abide by the climate goals of the Paris Agreement. If they don't, we will sell the shares of these companies. From 2023 on we will start to disinvest from any companies not on track to meet the aims of the Paris Agreement," says Adam Matthews, the head of the Church of England's pension fund, another clerical fund worth around 2 billion pounds.

The stocky church investment manager is the CA100+'s spokesperson. He led the initiative to its greatest success to date in late 2018. After protracted negotiations, Royal Dutch Shell, the British-Dutch oil company, agreed to reduce its carbon dioxide emissions by 20 percent by 2035 and by 50 percent by 2050. Before then, Shell had steadfastly rejected concrete targets. Now the group is heavily investing in alternative sources of energy. In February, Shell bought a Bavarian battery manufacturer called Sonnen, and the oil giant has expressed an interest in acquiring German green electricity supplier Lichtblick.

Shell has also pledged to reforest vast areas to compensate for its remaining greenhouse gas emissions. These targets are to be reviewed on an annual basis. If Shell fails to achieve the agreed objectives, it will cost the company's board of directors money -- literally out of their own pockets -- because executives' salaries are linked to these climate objectives.

These are admittedly small steps in view of the tens of billions of dollars that Shell is pumping into oil and gas production, but it's a start. "The Shell case has shocked the industry and set a new standard," says Matthews. The CA100+ initiative recently scored another victory at the BP oil group's annual general meeting, when shareholders decided that the company has to disclose how its business model is consistent with the Paris climate objectives. But they failed to pass a motion to introduce binding quotas for greenhouse gases similar to the ones adopted by Shell.

'Financial Markets Can't Save the World'

Investors are largely powerless, though, when it comes to the biggest carbon emitters of all: state power-plant operators in China. These operators are responsible for making the country the world's largest producer of greenhouse gas emissions. "The impact of our efforts is limited and financial markets can't save the world," says Henrik Pontzen.

"Investors and companies realize that the consequences of climate change can drive up costs and drive down revenue," says Pontzen, adding, "We invest sustainably not only for ethical reasons, but also to protect our clients' assets."

Pontzen also sold off his Vale shares after the accident in Brazil and, together with other funds, wrote to hundreds of publicly traded mine operators to enquire about their production safety standards. The deadline for them to reply is rapidly approaching. "If there are structural risks that are not addressed, we'll take appropriate action, regardless of how positive their business results may be," says Pontzen.

Pontzen recently achieved a notable success when, under pressure from CA100+, RWE and BASF agreed to review whether their lobbying work was in line with the Paris Agreement. The two DAX-listed corporations rank among the largest carbon producers in Germany. RWE CEO Rolf Martin Schmitz announced at the annual shareholders' meeting that the utility would review the climate policy positions of the industry associations that it belongs to.

And just a few weeks ago, Shell, which has become an industry pioneer, announced it was leaving the American Fuel and Petrochemical Manufacturers' association (AFPM) because the organization has failed to endorse the Paris climate resolutions.

But making headway with German carmakers is apparently more difficult. At recent annual shareholders' meetings, BMW, Daimler and Volkswagen blocked a number of motions by the CA100+ initiative aimed at rating the climate friendliness of the companies' lobbying activities.

The three automotive giants issued similarly worded statements in which they argued that the motions lacked the substantive and formal requirements to be included on the agenda. They also contended that the shareholders' meeting was the wrong setting for this type of decision, despite the fact that German carmakers have been publicly embracing a green image for some time now -- and the fact that, despite formal objections, it might have been worth it for the companies to respond to the proposals.

The situation in the U.S., where President Donald Trump has styled himself as a staunch defender of the oil and gas industry, is also difficult. Although states like California are pushing for climate protection and U.S. corporations have to deal with international investors, that's not always enough to make have an impact if the SEC steps in to shield companies from investors, as it did with Exxon.

And sometimes big money gives big oil a helping hand. In November 2018, when residents of Washington state were given the opportunity to vote on a regional carbon tax, big oil companies like Exxon and Chevron launched an advertising blitz with a war chest of 31 million dollars. The campaign was effective: 56 percent of voters rejected the proposal.