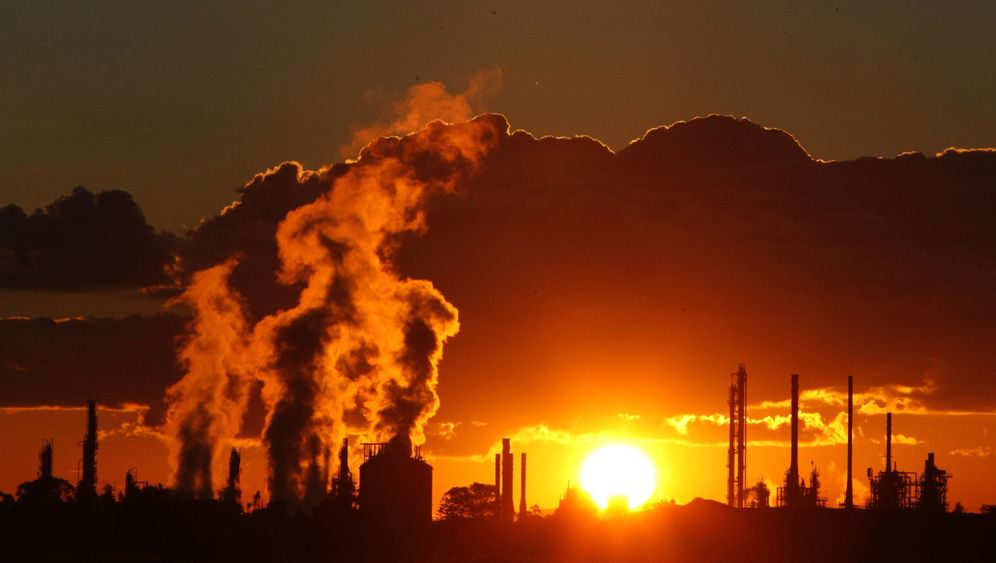 German Environment Minister Norbert Röttgen has hardly been in office for much more than a month, but he's already choosing his words for dramatic effect. "It's about the way we live, and it's about survival," Röttgen said last Thursday before the German parliament, the Bundestag, referring to the climate summit beginning Monday in Copenhagen. At the summit, the nations of the world will search for ways to reduce the CO2 emissions behind global warming. One of the tools to be discussed is the trading of emissions certificates.

In Germany, though, it is precisely this instrument that is causing a huge headache for Röttgen, as dozens of tax offices across the country are investigating shady emissions trading companies. All of the companies in question maintain accounts with the German Emissions Trading Authority (DEHSt), an arm of the ministry Röttgen heads. According to DEHSt head Hans-Jürgen Nantke, since September, his agency has "received official requests for assistance in cases relating to suspected sales tax fraud from various regional tax offices and tax investigation offices."

The authorities are investigating questionable transactions in Germany's central emissions trading registry. As in any other EU country, public utilities and industrial enterprises maintain accounts in the registry, which provides them with a certain number of emissions credits. Under the 2005 Kyoto Protocol, the emissions of climate-harming carbon dioxide are to be reduced as efficiently as possible with the help of this method of trading emissions certificates. According to this system, companies that invest in new, eco-friendly technologies no longer need all of their certificates and can, in turn, sell them to others -- and at a steep price.

Current prices for these certificates are set on exchanges, such as France's Bluenext, the ECX in London, the EEX in Leipzig and, more recently, the Greenmarket segment of the Munich Stock Exchange. At the moment, the right to emit one ton of CO2 into the atmosphere is worth about €14 ($21). In the first half of 2009, the volume of trade in emissions certificates in Europe alone already amounted to €40 billion.

Going after the Climate Speculators

The high-stakes deals being made with certificates are attracting more and more speculators. While investment banks, such as Goldman Sachs, and US-based hedge funds are speculating on emissions certificates, small trading companies are now trying to bilk tax authorities out of the sales tax that is part of many of these certificate-trading deals. Tax authorities are investigating "an estimated 30 to 40 companies," says Nantke, adding that some of these companies are based abroad.

Investigators are apparently also interested in bank transactions. "The goal is to find out what role the financial institutions play -- whether intentionally or not -- in the chain of fraud," one investigator says. Some of his colleagues, he says, are interested in accounts at Deutsche Bank, Germany's largest bank, which has several emissions accounts with DEHSt and manages offset and certificate accounts for members of the Munich-based Greenmarket CO2 exchange. But a bank spokesman says the bank has "no knowledge of any such investigations."

Insiders at the Bonn-based Federal Central Tax Office, which is currently coordinating the investigations, believe that the government could be forfeiting several million euros a day in lost tax revenues. Experts already estimate the total loss at up to half a billion euros. In Bavaria alone, the Munich tax investigation office plans to look into dubious transactions valued in the hundreds of millions of euros.

The investigations are still considered classified. In a terse statement, the Bavarian state tax authority notes that it is "familiar with this fraud model on the basis of intensive cooperation between EU member states in the area of sales tax fraud."

Elements of a Scam

Almost everyone involved in the trading of emissions certificates "has been approached by dubious businesspeople in recent months," says a certificate broker in London. In most cases, they are trying to quickly buy or sell very large numbers of emissions certificates. "They are frequently former mobile phone or computer dealers who have discovered a new business segment for their tax fraud activities," the broker adds.

The scam is based on the same model investigators have seen used for years in the cross-border trade in conventional goods. The German treasury alone loses several billion euros a year to these so-called sales tax carousels.

Certificates have made things much easier. For fraudulent dealers, they mean no longer having to cart around boxes of goods. "The fraud works with the click of a mouse," says one emissions trader from a German bank.

The basic concept of tax fraud based on carousel transactions "takes advantage of the fact that sales within the EU, but beyond the borders of individual member states, are exempt from sales tax," according to a report by the trade monitoring office at the Leipzig's EEX exchange.

In the fraud scheme, a small German company buys certificates from a foreign partner without having to pay sales tax. Then it resells the certificates within Germany, charging the buyer the current market value plus Germany's 19 percent sales tax (VAT). In the Berlin registry, the certificates wander from one account to the other.

But the German seller of the certificates disappears before paying the sales tax it has collected to the tax office. Its profits correspond to the 19 percent sales tax. The buyer, who acts as an accomplice in some cases, has since filed an application with the tax authorities for reimbursement of the input tax. The government then disburses the funds. In many cases, the buyer of the certificates also disappears a short time later.

The presumed tax cheats usually hide behind miniature companies with odd names and rather flexible and broad declared purposes. For example, a limited liability company from North Rhine-Westphalia offered to sell German banks several hundred thousand tons of CO2 a day. According to its entry in the commercial register, the company deals in all sorts of goods, particularly motor vehicles, furniture, household goods, fruits and, as of early October, "carbon emissions."

When contacted, no one at the company seemed to know about any of this at first. Then, a company spokesman said that it was "involved in the wholesale textile business." Finally, and in a conspiratorial fashion, the spokesman provided the telephone number of a British man named "Michael," who reportedly dealt in emissions. But this Michael could not be reached for comment.

A certificate dealer registered with Munich's Greenmarket CO2 exchange has also declined to answer any questions about the suspicions of tax investigators. In official terms, the company has only been involved in the business of trading emissions certificates since July 28. Before then, the company defined its purpose as "trading in all manner of goods, particularly the import and export of software products."

The trail to the men behind the scenes of this company also leads to Great Britain, where a major wave of fraud cases began well over a year ago -- and where the climate mafia plundered the British treasury at breathtaking speed. Britain's Financial Services Authority (FSA) estimates that the loss of tax revenue could soon reach €2-3 billion.

Rapid changes in trading volumes on emissions exchanges triggered a major alarm among investigating authorities. On Aug. 19, British investigators scored their first major coup when police searched 27 houses and arrested seven suspected tax evaders, who are believed to have jointly defrauded the treasury out of £38 million pounds (€42 million or $62 million). At the time of the raid, though, the alleged crooks had already been out of business for several weeks.

On July 30, the British government followed France's lead and summarily eliminated the sales tax on emissions trading. At the same time, the Dutch introduced the so-called reverse charge method, which shifts the tax burden from the seller to the buyer.

The Crooks Come to Germany

By no later than last summer, officials at Germany's Finance Ministry should have known that the tax crooks would be on the hunt for a new victim. "Germany is now seen as the tax cons' next potential target," the trade monitoring office in Leipzig wrote in October, noting that the market was "on a heightened state of alert." The market watchdogs feared not only "loss of revenues for the tax authorities," but also "the risk of loss in terms of reputation" and the "loss of confidence in the entire CO2 market."

By now, tax-revenue losses were growing almost daily. But, at first, lawmakers did little to confront the problem. The over-correct lawyers at the Finance Ministry were unwilling to participate in the measures taken by other countries, which -- they pointed out -- violated EU law. Instead, they hoped the European Commission would quickly come up with a proposal.

Last Wednesday, the EU's Council of Economics and Finance Ministers gave its official blessing to the reverse charge method. And, since then, there has been some movement on the issue in Germany, and a proposal to revise the rules is expected to be submitted to German Finance Minister Wolfgang Schäuble as soon as possible.

The Finance Ministry wants to push the legislation through Chancellor Angela Merkel's cabinet before Christmas. And Environment Minister Röttgen will also have to address the issue after his return from Copenhagen.