When he speaks, Heinrich Weber sounds like a psychotherapist. But his profession involves addressing the worries of people who might normally be considered to have little to worry about. It's an area that Weber, 46, knows well. He has heard plenty of tales of woe from his super-rich clients.

"Those who were born rich have seen the dark side of wealth," says Weber, who is wearing a gold watch, a pinstriped suit and a pocket square, as he talks about his everyday life as a Swiss private banker. He isn't being ironic. 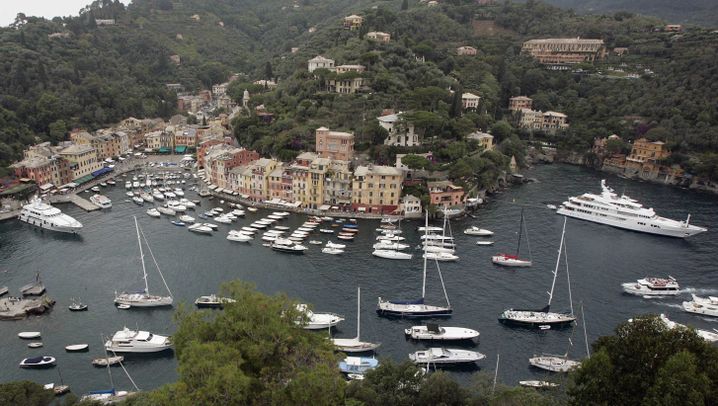 Photo Gallery: The Discreet World of the Ultra Rich

People worth hundreds of millions of Swiss francs, dollars or euros, says Weber, suffer from the "high expectations they are expected to fulfill." Besides, he adds, they are mistrustful, believing that people are only interested in them for their money. This often causes "emotional problems and leads to isolation," says Weber, with a sympathetic look on his face. Some of his clients even "deliberately wear old sweaters and drive old cars, so as not to appear rich."

Since the collapse of US investment bank Lehman Brothers, the clients in Weber's world are faced with another painful reality. They are losing money -- a lot of money. According to the US business magazine Forbes, the present net worth of the world's billionaires shrank from $4.4 trillion (€3.1 trillion) to $2.4 trillion during the financial crisis. And the number of dollar billionaires worldwide declined from 1,125 before the recession to only 793 in March 2009.

Some of these prominent former members of the billionaires' club lost part of their money in Germany. US investor Christopher Flowers, for example, had to say goodbye to his billionaire status as a result of his stake in the now-nationalized German mortgage lender Hypo Real Estate. Madeleine Schickedanz, a major shareholder in the now-insolvent trading company Arcandor, lost much of her fortune. German businessman Adolf Merckle even committed suicide when his empire threatened to collapse.

Financial consultants like Heinrich Weber are very busy these days, even though his line of work is so discreet that he doesn't even want the exclusive Swiss private bank for which he works mentioned by name.

"If you're the kind of person who has an irrepressible urge to tell his family or friends about these high-flying people, you shouldn't work as a private banker," says Weber, who recently published a handbook for working with the super-rich co-authored by industry colleague Stephan Meier. In the industry jargon, these people are known as "ultra high net worth individuals," or UHNWIs.

The Need for Discretion

"Fortunately, my wife doesn't have a problem with the need for discretion," says Weber. "As a gynecologist, she is familiar with the concept of doctor-patient confidentiality." And his two small children aren't exactly a risk factor either. When the family recently took a trip on the luxury yacht of Weber's best customer, the children did ask "why the man has such a big ship," but they are still too young to be interested in specific names and facts.

Weber uses a quote from Goethe to describe the way he goes about his business: "Whoever wishes to keep a secret must hide the fact that he possesses one."

And there are still plenty of secrets to go around, with about 20,000 UHNWIs living in the world today, more than a quarter of them in the United States. Germany, say experts, is home to an impressive 1,150 UHNWIs. What they all have in common are personal assets of at least $50 million. For some time now, discreet crisis management has been in demand in their milieu. "We work like a coach who asks the right questions," says Weber.

Family-owned companies, in particular, "have faced difficulties," he says, adding that many are deeply in debt. "For instance, I am urgently seeking a buyer for an enormous art collection," says Weber, who only shows limited pity for his clientele.

There is a reason for his relative lack of compassion. Those affected by the financial downturn generally do not need to change anything about their lifestyle, as selling their villas or luxury cars would simply not bring in enough money, and the running costs represent a negligible share of their total income. And, of course, they can still afford to pay for the services of someone like Weber, even though the traditional culture of banking secrecy in his native Switzerland is gradually crumbling.

Weber takes a relaxed approach to his clients' problems. Most are from the Middle East, and although banking secrecy is of great concern to them, it is not because of its impact on taxes, but because of what Weber calls "protection of the private sphere." However the ban on minarets the Swiss recently approved in a referendum has not led to any significant withdrawals of assets from the country's banks, he says.

Weber is far more concerned about the illegal disclosure of data, as evidenced by recent cases involving the Swiss branch of Britain's HSBC and Liechtenstein's LGT Bank. In mid-2007, a former LGT employee sold account information to Germany's foreign intelligence agency, the Bundesnachrichtendienst (BND), for about €5 million. A former employee of HSBC provided account information to the French government. Tax authorities in both countries have used the information to pursue tax evaders.

Photo Gallery: The Discreet World of the Ultra Rich

Weber's advice to banks is to defend themselves against such activities. "Account information should be linked to a code name and not the customer's real name," he says. To ward off illegal disclosures of information, he recommends that bank computers be equipped with neither CD burners nor ports for USB drives, and that documents not be removed from bank premises in all but exceptional situations.

But despite all precautions, Weber too was once the target of prying paparazzi, in an incident that involved a prominent royal family. As always, his meeting with his royal clients did not take place at the bank, but in a secret location. After a gala dinner that lasted several hours, Weber's team and his clients left the location shortly after midnight -- only to be confronted by paparazzi.

"A few days later, a photo of me with my clients appeared in a magazine," says the banker, recalling the mishap. From then on, every industry insider knew the identity of the royals whose assets he was managing.

The Definition of Rich

But what can be so fascinating about marveling at the immense wealth of other people, day in and day out? "You often deal with very unconventional people who know a great deal," says Weber, who is no stranger to a life of luxury himself. While studying engineering at the Swiss Federal Institute of Technology in Lausanne, he and a group of colleagues founded a company for trading in futures contracts. At 28, he sold his shares in the business to a British financial operation -- and made a fortune in the process.

Weber considers himself affluent at best, given the different set of standards that applies in his line of work. He considers someone to be rich "if they can have one of the world's most renowned symphony orchestras perform in their garden, and the musicians significantly outnumber the members of the audience."

According to Weber, greed or glamour are no longer the relevant factors among the top few thousand members of the world's moneyed aristocracy. "It's really a matter of ambition, of the need to show everyone that you were right about the execution of an unconventional idea," says Weber, although he himself knows very well that this only half the truth.

There is often little difference between multimillionaires and small investors in terms of their desire to make money. For instance, many were only too willing to place their cash in the hands of Bernard Madoff, the American swindler of the century, who was sentenced last year to a record 150-year prison term.

Hardly anyone was suspicious about the uncanny regularity of Madoff's annual returns. Even the Geneva-based private bank UBP gave its seal of approval to Madoff's supposed money-making machine.

Weber finds all of this inexplicable. Or perhaps he simply refuses to believe that the most primitive of instincts are also felt by his elite clientele.

In this exclusive club, Lamborghinis and Learjets are seen as the vices of lightweights. Weber's clients are more interested in immortality, which is a more costly proposition. For instance, they build collections of sinfully expensive antique cars, pay for the complete renovation of their family's home village or purchase the most prominent buildings in town.

"Trophy projects" are what UHNWI bankers call the deals that are not subject to strict economic criteria. "It is not uncommon to see someone overpay to buy the best hotel in a town," says Weber, flashing his brightest therapist's smile. For example, Germany's Oetker baking powder dynasty acquired the exclusive Brenner's Park-Hotel in the German resort town of Baden-Baden. The Schlosshotel Bühlerhöhe, a castle hotel in the Black Forest that legendary German businessman Max Grundig transformed into a luxury paradise, now belongs to Dietmar Hopp, the co-founder of German software giant SAP. And Jürgen Grossmann, the CEO of the German energy company RWE and a billionaire thanks to his ownership of the Georgsmarienhütte group of companies, recently snapped up the exclusive Kulm Hotel in Switzerland's Arosa ski resort.

For most multimillionaires, says Weber, emotion plays no role in their investments. Nevertheless, some of these eminently reasonable people are susceptible to the kinds of small gestures that private bankers use to promote good business relations, such as invitations to go sailing with an America's Cup team or to be chauffeured to the Formula One race in Monaco in a Rolls-Royce -- even at the risk of "getting stuck in traffic for hours and missing the race," says Weber.

But he doesn't like to talk about such services, or somewhat more discreet favors. Inebriated clients have been known to call him in the middle of the night or to invite him to a cocktail party so that he can later give them his opinion of their daughter's new boyfriend.

One of the more delicate services Weber is sometimes asked to perform is to purchase an apartment in Paris, London or Rome for the mistress of one of his super-rich clients. This often leads to "very tense discussions" years later, he says, when the will of the now-deceased client is opened.

3 Bilder Photo Gallery: The Discreet World of the Ultra Rich The Italian town of Portofino: The super-rich lost a great deal in 2009, with hundreds of unfortunates losing their billionaire status. Madeleine Schickedanz, a major shareholder in the now-insolvent trading company Arcandor, also lost much of her fortune.

The Italian town of Portofino: The super-rich lost a great deal in 2009, with hundreds of unfortunates losing their billionaire status.

Madeleine Schickedanz, a major shareholder in the now-insolvent trading company Arcandor, also lost much of her fortune.