Jan Rollo, CEO of Slovenska Sporitelna, Slovakia's largest bank, has a problem you don't encounter too much these days. While banks worldwide struggle to raise capital, Slovenksa Sporitelna, a unit of Vienna-based Erste Group, has more money in deposits than it does in outstanding loans. "We're long on deposits," Rollo says with a wry smile in his eighth-floor office on the outskirts of Bratislava. 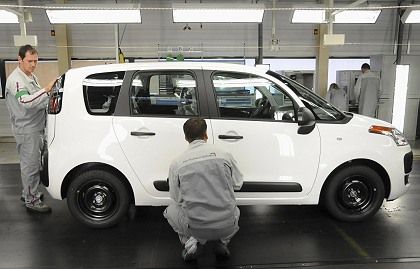 The bank's headquarters overlook a small lake where a handful of bathers could be seen sunning themselves on a balmy day recently. The placid scene was not misleading. In fact, Slovakia is an island of relative calm in a troubled region. Growth has fallen sharply in line with all of Europe, but the country, as well as neighboring Poland and the Czech Republic, are in relatively good shape from a financial point of view.

Slovakia's government balance sheet, for example, is healthy compared to its European neighbors. The public budget deficit equals 28 percent of gross domestic product, less than half of Germany's debt ratio and a pittance compared with Italy's, where the national debt exceeds a year's total economic output. Unlike Hungarians or Romanians, the Slovaks did not take out large numbers of mortgages and loans denominated in Swiss francs or other foreign currencies, which then became ruinously expensive to repay when their domestic currencies plunged. Slovakia's current account deficit was about 6 percent in 2008, compared with nearly 25 percent in Latvia.

Slovakia's fiscal prudence allowed it to join the euro common currency on Jan. 1, only the second Central European country after Slovenia to qualify. "A systemic banking crisis is very unlikely," says François Lecavalier, regional director in Bratislava for the European Bank for Reconstruction & Development, which underwrites highway construction and other projects in the country.

Lumping It with Latvia

But whether foreign investors will also reward Slovakia for its prudence is another question. Slovakians fear that foreign investors will lump the country with some of its troubled neighbors. The country in worst shape is Latvia, which has been struggling to prop up its domestic currency as economic output goes over a cliff. Latvian GDP will plunge 18 percent this year, according to government estimates, and fears are growing that the Baltic nation could default on its debt and touch off a regional financial crisis. "A crisis in Latvia could serve as a wake-up call to investors, alerting them to similar vulnerabilities elsewhere," analysts at RGE Monitor, the New York-based economics consultancy, said in a recent note to clients.

It would be unfair if problems in the Baltics cause investors to sour on healthier Central European countries such as Slovakia, the Czech Republic, and Poland. But that doesn't mean it won't happen. "If the whole world is in bad shape, we will be drawn into that as well," Rollo says. (He adds that he thinks Slovakia is well prepared, however, because of its 19 percent flat tax on corporate and personal income, and other business-friendly reforms.)

Already, the Slovakian economy has suffered from the global slump in car sales. The country is the world's largest per capita producer of cars, with big factories operated by Volkswagen, Kia Motors, and PSA Peugeot Citroën. As those companies trimmed production, the economy contracted at an annual rate of 5.4 percent in the first quarter after growing 2.5 percent in the previous quarter.

To some foreign observers, the biggest risk to the banking system in Slovakia is that local institutions will become embroiled in the problems of their foreign parents. About 90 percent of the banking sector in Slovakia belongs to foreign institutions, which also include Vienna-based Raiffeisen International and Italy's UniCredit. The Slovak central bank has raised local banks' capital requirements to prevent the parent groups from draining assets from their subsidiaries.

That risk will ease, though, as the global bank system stabilizes. Rollo and other local businesspeople say they're confident Slovakia will bounce back faster than its neighbors because the economy is fundamentally sound. And there could even be a silver lining to the turmoil: As foreign investment sags, the current left-wing government will face pressure to step up reforms such as upgrading the nation's universities, which businesspeople complain do not teach young people the right skills.

In addition, says Czech-born Rollo, the adoption of the euro is forcing local companies to become more competitive. As currencies of neighboring countries have plunged, Slovakia has become more expensive than Hungary or the Czech Republic for foreign investors. But that could be healthy in the long run. "The euro pushed local producers to be more efficient," Rollo says.