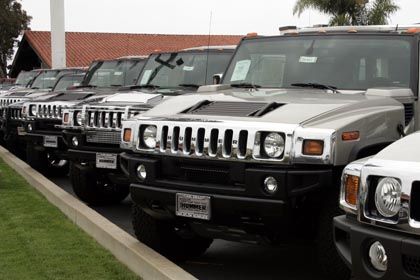 Will General Motors' übermacho Hummer line of SUVs be the first victim of the global energy crisis?

German carmaker Opel, owned by American automobile giant General Motors, as well as the European division of Ford could both profit from the current crisis at their mothership companies across the big pond. GM and Ford have been hit hard by falling sales of gas-guzzling pickup trucks and SUVs. With drivers having to pay an average of over $4 per gallon, sales of larger cars have slowed to a trickle, blindsiding US automakers, who have focused for years on the formerly lucrative truck and SUV market. Unable to quickly retool to develop their own fuel-efficient models, GM and Ford are both reviewing their units in Europe -- where compact and subcompact models are far more prevalent -- for possible models that could be produced for the American market.

Of course, with the euro as strong as it is against the dollar, the cars would have to be manufactured at US plants. If exported to the US from Europe, they would be immediate money losers. Still, the European R&D departments could profit from the additional work. It wouldn't be unprecedented for US automakers to introduce European-designed models in the US. GM already manufactures the Opel Astra in the United States under its Saturn brand.

The future of SUVs in the States is more uncertain than it's ever been before. Lately, carmakers are even being forced to give heavy discounts just to move somewhat more energy-efficient hybrid SUVs. GM is even considering selling off Hummer, its übermacho brand.