The faucets dripped, the windows couldn't be opened and rain and snow came in through the roof and dripped down the walls. The Mount Washington Hotel in the small New Hampshire town of Bretton Woods was not in great shape when it served as the site of a conference on a new world economic order for 700 international financial experts shortly before the end of World War II. The 1944 meeting went on for three weeks in what one guest dubbed the "madhouse." Still, despite the sub-optimal conditions, by the time it had ended, the conference had agreed on the rules and institutions that would shape the international financial system for decades to come.

Now, more than six decades later, another world financial summit is set to take place this weekend. The world's 20 most important government leaders will meet on Friday in Washington D.C. to discuss a new fundamental reform of the financial system. In the wake of the crash in the credit markets, the billions in bailout packages put in place around the world and last week's warnings of a global recession, many governments have high hopes for sharper regulations in the global financial markets.

These expectations, though, are unlikely to come to fruition. More than eight weeks after the collapse of the US investment bank Lehman Brothers, it is clear that prospects for profound and global financial reform are quite limited. In order to defend Wall Street's supremacy, the United States wants to remain the dominant force on the capital markets. The Europeans are deeply divided, once again. And even rapidly developing countries like China and India are only moderately interested in extensive restructuring efforts. 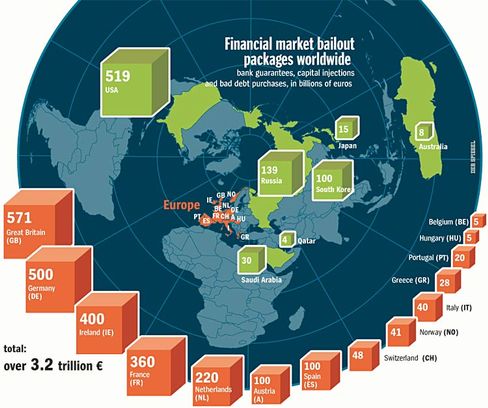 Indeed, it already seems clear that the new financial order will end up looking suspiciously like the existing one. A wave of new government interventions will be just as unlikely as the formation of additional international super-agencies in the mold of a global central bank. Furthermore, US President-elect Barack Obama will not be at the meeting, making it impossible to gauge the extent to which he might support reforms. It seems clear, however, that he will do what he can to defend the interests of the American financial industry.

The list of reform ideas that might be capable of receiving broad support, in any case, is quite short -- a reality that became clear as the meeting was being prepared. And it is the US which has done much of the preparing, having seized the reins in the run-up to the summit. Indeed, Brazil, which is the current holder of the Group of 20 (G-20) Finance Ministers, could easily have organized the conference. But the US assumed control anyway. Japan too, in its capacity as current head of the G-8, expressed interest in hosting the meeting -- but was ignored. Finally, Washington has benefited from European disunity, with the EU spending recent weeks embroiled in its usual debates over principles and ideals.

While some of the countries in the European Union support the US argument for relatively unfettered capital markets, French President Sarkozy, in particular, favored stronger government intervention. But the Europeans showed little interest in toeing the Paris line. There has been resistance to almost every idea that Sarkozy, the current holder of the rotating EU presidency, has come up with.

The British and the Swedes, for example, found the specifications for individual financial products or markets far too detailed and the proposed rules to achieve better control of bank activities far too strict. Czech Finance Minister Miroslav Kalousek complained that it was "a revolution, not evolution" of the financial system. The Dutch torpedoed the French proposals with their own internal document. The Germans interpreted some of the wording in the French proposals as another attempt by Sarkozy to bring himself a step closer to achieving his fervent wish of gaining more political control over global -- or at least European -- finance markets.

In the end, it became clear that France would have to thoroughly revise the document outlining a common European position.

In response, Sarkozy served the 27 EU heads of state and government, who had come to the Justus Lipsius Building in Brussels for a meal of chicken and scallops last Friday afternoon, a slimmed-down version of his previously lofty plans. The document that the four EU representatives, from Germany, France, Great Britain and Italy, will present in Washington is more of a series of well-intentioned headings than a list of precise proposals. Under the EU document:

The Brussels document represented an initial success for the US government, and yet even this most recent, watered-down concept still goes too far for Washington.

In lock step with its global financial industry, the US government is trying to structure the planned capital market reforms in accordance with the principles of cosmetic surgery. In other words, it wants everything to look new, while keeping everything the same beneath the surface.

The heads of Wall Street's major banks, like Goldman Sachs CEO Lloyd Blankfein, share the government's view. The financial crisis is "a once-in-a-century credit tsunami" says Blankfein. But for someone like him, the crisis is also little more than an uncomfortable accident that does not call the overall system into question. Laws are ineffective against accidents, and it just so happens that "risk taking," according to Blankfein, is the business model of banks. Anyone who rules out risk is destroying that business model. Such is the worldview of Lloyd Blankfein, a man who earned $68.5 million (€53.5 million) in 2007.

US Not in Favor of Major Changes

It is only too convenient that Blankfein's predecessor at Goldman Sachs now works in Washington, as treasury secretary, which puts him only one garden gate away from the president's White House. Treasury Secretary Henry Paulson sees the world through the same lens as Blankfein. Anxious not to dry up business on Wall Street, Paulson is not only bailing out the banks with taxpayer money, but is also not doing taxpayers a favor by imposing adequate rules. The US government has known for years that the country's financial system rests on shaky ground, with its banking regulatory system scattered across five government agencies, as well as its highly risky hedge fund industry, which has made an art out of turning debt into profit.

For this reason the IMF, which, since the Asian crisis, now carefully examines countries to assess the stability of their financial systems, has been begging for years to be allowed to do its work at home in the United States. IMF special investigators are itching to interview bank executives, pay a visit the Federal Reserve Bank and subject the financial industry to a so-called stress test.

Treasury Secretary Henry Paulson finally agreed, but under one condition: The final report could not be presented until 2009, after the Bush administration has left office.

The financial crisis has now accelerated the stress test and taken it from the drawing board to the real economy. But conclusions should not be drawn, if possible. Why? Because the financial industry contributed about 30 percent of total corporate earnings in the United States in 2007.

None of the current political leaders wants to jeopardize this profitability -- despite a disaster that has cost billions, despite the nationalization of entire financial institutions and despite the millions in bad mortgage loans and an imploding Wall Street. If the Germans had their way, high profit margins would become a thing of the past. The US financial industry would see itself thrown back to the level of a local mortgage bank.

Under these circumstances, the US authorities are not enthusiastic about proposals put forward by individual European governments to raise the equity ratio for all credit transactions. This would restrict borrowing to those who could provide significant savings as collateral. And it would put an end to the business model of many Wall Street banks -- issuing loans on debt. Hedge funds, which generally have little savings, would be practically dried up by equity regulations.

Given these considerations, American experts advise against such a de facto liquidation of this part of the financial industry. "Hedge funds are part of the worldwide brain industry," says Sebastian Mallaby, the son of the former British ambassador to Germany and director of the Greenberg Center for Geoeconomic Studies in Washington. Eliminating them, according to Mallaby, will only slow down growth and reduce prosperity.

Washington is even less enthusiastic about European plans for the IMF. The Washington-based organization has 2,500 employees from around the world who spend much of their time monitoring the financial condition of nations. When financial shortfalls arise, the IMF comes to the rescue with loans. Germany and other countries would like to assign the organization a leading role in supervision of the banking world. An early warning system could be installed that would monitor all major transnational transactions and all so-called financial innovations. The system would enable anyone to determine what is happening in individual markets.

No Mention of Increased Oversight

Mallaby calls it a risky idea. More transparency, he says, would strengthen the herd instinct, because it wouldn't just illuminate the relatively unprofitable transactions, but would also shine the spotlight on the lucrative ones. "Most people who demand transparency don't know what they are talking about," he says.

Thus, Washington is sufficiently vague in its draft version of the final communiqué. There is no mention of increased regulation or more attentive oversight. On the contrary.

The Americans are unwilling to transfer their competencies to supranational entities. At best, they could be persuaded to support a call for heightened cooperation among central bankers, like European Central Bank President Jean-Claude Trichet, and the heads of international agencies like IMF Managing Director Strauss-Kahn.

The organizations, according to the draft document, should "strengthen their cooperation and undertake significant joint efforts to combine improved macroeconomic analysis with smart oversight." This is the sort of thing people say when they have no desire to say very much at all.

Similarly noncommittal language continues throughout the document. The draft communiqué supports "common principals for reforms in the financial markets" and demands an "acknowledgment of an open, global economy." It is seen as unlikely that Europeans will manage to achieve significant corrections at the upcoming summit meeting. The group will initially focus on the causes of the financial crisis. Individual working groups will then form to develop reform concepts for later meetings.

But the longer the discussion lasts the more uncertain do the chances of comprehensive reform become. Experts predict that once the worldwide financial industry has pulled itself together again, support for major government intervention will decline even further.

The Europeans cannot even count on the support of the big emerging economies, which will be represented at the summit. China, for instance, as America's biggest creditor, has a direct interest in the well being of the American banking sector. The Chinese hold a large share of their foreign currency reserves in US dollars. And other governments are also pursuing policies that are only partially compatible with the European plans.

A few days ago, Russian President Dmitry Medvedev wrote a letter to the German chancellor to inform her that he fundamentally supports the European line. At the same time, he also made it clear that Russia is also pursuing other goals.

The Russians want the ruble to become a "regional lead currency" for the greater Eurasian region in a new global financial system -- and Moscow to become "one of the leading world financial centers."