Chief executives of Germany's major energy suppliers usually don't have much time for their junior counterpart, Lichtblick. The Hamburg-based green-electricity provider's half a million customers may be "impressive," they say, but Lichtblick works in a niche market and is no competition for the larger companies in the industry.

But things may be about to change. In the next couple of days, the relatively small company is due to reveal a new business model that could shake up the energy market quite a bit -- and not only in Germany. So, despite the fact that they currently have large power plants and considerable power over the market, things may soon turn a little less comfortable for energy giants like E.on and RWE.

Lichtblick -- the name translates as "glimmer of hope" -- is no longer content with distributing eco-friendly gas and electricity. Ten years after entering the market, the group wants to take a shot at the electricity-generation business as well -- and to do so while collaborating with a unusual partner on a completely new idea.

Unlike Germany's well-established energy giants, the Hamburg-based company isn't planning to build a few colossal wind farms or solar-panel systems. Instead, it wants hundreds of thousands of buildings and private households to get their own highly efficient mini "home power stations."

The ambitious new project could be worth billions of euros and generate enough electricity to replace up to two nuclear power stations or even coal-fired power plants in the near future. The technology required to put this plan into practice is highly complex, but -- depending on demand and the market situation -- the new setup could network 1,000, 10,000 or even 100,000 small natural-gas-powered thermal power stations and, in effect, instantly create a virtual large one.

A giant quantity of electricity could be generated by such a system. Channelled straight from the basements of individual houses, where Lichtblick plans on installing the mini power stations, it could then be fed into the public powergrid. Likewise, the mini stations could also provide a source of cheap thermal energy and warm water for each household.

It may all still sound like a fairy tale, but developers at Lichtblick have actually been testing the system as part of a field trial in Hamburg. What's more, now one renowned company has shown an interest in becoming a partner in this pilot project: the Wolfsburg-based motor- and auto-manufacturing giant, Volkswagen.

For many years, Volkswagen engineers based in the central German town of Salzgitter have been tinkering with different ways to build a highly efficient thermal power plant. And there are good reasons why VW is looking into the field. "Much of what you need to manufacture a mini powerplant" is already found in ultra-modern automobiles, says Rudolf Krebs, a director of Volkswagen's powertrain-development division.

The centerpiece of the new mini powerplant system is a natural-gas-powered engine used in some Volkswagen Golf models. Thanks to the engine's highly intelligent design -- and the fact that the heat it produces can be directly used to heat the house -- the efficiency factor of the Volkswagen mini thermal powerplant lies at around 94 percent.

Volkswagen engineers have long suspected that the mini thermal stations could prove incredibly promising. Until now, though, they just haven't had the technical know-how and familiarity with the electricity industry they needed. Nor did they have a concrete idea of how the relatively expensive (€20,000 or $29,000) mini thermal plants would be able to survive in a competitive energy market.

But now these problems are being solved by Lichtblick. As Werner Neubauer, a member of VW's executive board, told SPIEGEL, the company's proposal was so convincing that its managerial board agreed to collaborate with Lichtblick on the project almost immediately.

This week, Volkswagen and Lichtblick plan to sign a contract giving the auto manufacturer exclusive global rights to produce the mini thermal plants. If all goes according to plan, Volkswagen's auto-production facilities in Salzgitter will be able to churn out 10,000 mini powerplants every year.

"This will be a real revolution for the electricity market," says Lichtblick CEO Christian Friege. But there is still one question that remains unanswered: Will there be enough customers willing to give up space in their basement and foot the bill for their very own "home power station?"

A Breakthrough for Eco-Friendly Energy

The new concept may prove particularly appealing to homebuilder associations and homeowners who may already have toyed with the idea of replacing their aging central-heating systems. For an all-inclusive fee of around €5,000, Lichtblick technicians promise to tear out and dispose of any old system and replace it with a new Volkswagen mini thermal powerhouse. Repair and maintenance costs from then on are covered by the company, and the customer only has to pay for the energy actually used -- a sum significantly lower (or so Lichtblick claims) than the cost of heating with gas.

Under this arrangement, Lichtblick is effectively paying the homeowner rent for being able to use their basement, while homeowners benefit from getting cheap thermal energy. As an added incentive, homeowners will also receive a bonus at the end of the year based on the revenue the system generates for the companies. After all, the system will not only generate thermal power, but also electricity, which it can sell for a tidy profit.

Thanks to a carefully devised monitoring system centrally linking the system via the Internet, the network will be set up to optimize its functioning. According to this system, water will be heated up more often in the homeowners' basements when there is more demand for electricity on the energy market. This would happen, for example, when there's a change in the weather and thousands of windmills can simply not provide enough energy to meet a sudden surge in demand. In such cases, as Lichtblick executive Gero Lücking explains, Lichtblick will be able to react very quickly and channel the missing amount of energy into the national powergrid.

Such an arrangement would be a breakthrough for eco-friendly energy as well. Owing to the fast reaction rate of the system of small powerplants, a lot more sustainable energy could be used than has been the case until now.

More-established energy suppliers, on the other hand, will not benefit from the new arrangement and might soon feel its sting. Their multi-billion-euro back-up power plants, which the energy companies currently use to compensate for fluctuations in the electricity supply, making a nice profit in the process, may soon be displaced by the cheaper and more flexible VW power stations.

And then it might just be time for the chief executives of Germany's major energy suppliers to give their little Hamburg-based competitor a bit more respect, instead of the occasional condescending glance. 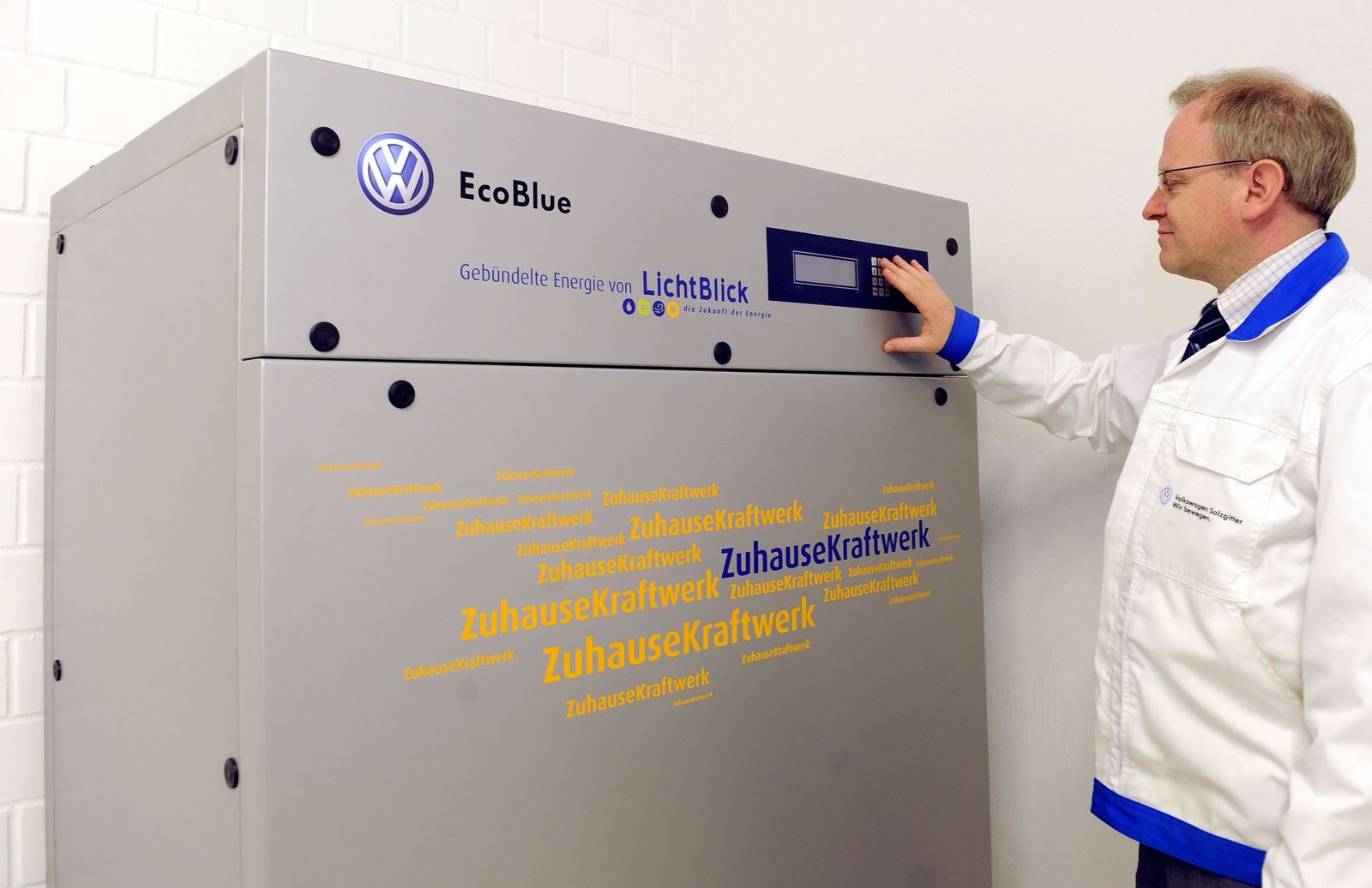 The mini thermal powerplant is cheaper and more flexible than its larger counterparts.