Detlev Schweim runs MarktTreff, a little corner store on the main street of Gülzow, a village of 1,300 inhabitants just east of Hamburg. He opens the shop at 7 a.m. and sells his first rolls and newspapers to the early-bird customers. Later in the day, he places orders with his suppliers and maybe puts together a couple of gift baskets meant as birthday presents. During his lunch break, he'll put up all the ads for next week's sale items. Between 2:30 and 6:00 p.m., he'll work the cash register. And once the store closes, he'll sit down to do his bookkeeping. This is not a job for a 9-5 cardpuncher. 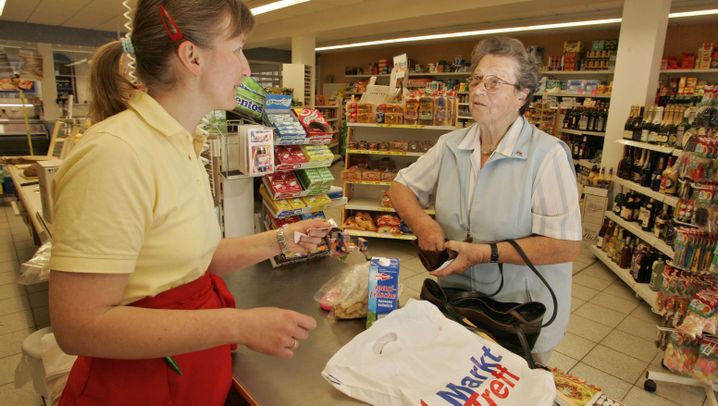 "We're happy he's here" says Vera Poggenhorn, as she weighs her apples before heading off to grab milk, yoghurt, butter and her favorite magazines. "I like to get my cheese and sausages here, too," she says. "The supermarkets have family packs, but here you can get them by the slice."

Out with the New, and In with the Old

The age of the traditional corner store is over. As supermarkets and discount stores grew bigger and bigger, smaller stores just couldn't compete with their bargains. In fact, over the last 10 years, 20,000 grocery stores in Germany have closed their doors for good. And the smaller the town, the worse things are. For example, commercial chains have more or less disappeared from places with fewer than 5,000 inhabitants. As they see it, it's only worth it opening a new branch in an area that can offer at least 8,000 potential customers.

This continuing trend particularly effects the 12.3 million people -- or 15 percent of all Germans -- living in more remote rural areas, such as Gülzow. When the village grocery store shut down 11 years ago, the elderly found themselves completely stranded since the nearest supermarket is 10 kilometers (6,2 miles) away, and the buses only run after school hours. Younger people were also annoyed at having to get into their cars for the smallest things and having to wait for the weekend shopping trip to get fresh bread. Though the town council managed to have a bakery set up in the village, it had to shut down after only one year because people still wanted to buy their bread while doing the rest of their shopping in the city nearby.

But it's all coming back to Gülzow now. When the regional government launched a subsidy program four years ago, the village gladly got on board. In the end, it received €800,000 ($1.2 million) in development funds. The community of Gülzow invested €1 million of its own on top of that and purchased a building in the middle of the village which would house the new store.

Schweim's MarktTreff is not your standard village shop but, rather, the corner store of the 21st century. The villagers didn't just want your average supermarket and beverage store; they also wanted a store that would make deliveries and that had a delivery service, a party and buffet service, and a café complete with an outdoor area offering breakfast throughout the week and weekend brunch on request. The villagers also wanted a meeting room for local associations in which artists from the region could display their works. One of the strongest demands was for services for the elderly, so the top floor of the building will soon house a medical practise with several physicians working a rotating schedule.

Gülzow isn't the only town doing this sort of thing. In fact, 25 villages in its state, Schleswig-Holstein, have set up their own MarktTreffs, which vary in size between 20 and 500 square meters (215-5,400 square feet). Though all are supplied by the same wholesaler, they all offer products and services tailored to the needs and desires of the inhabitants of the particular village. For example, while some serve lunch for students and seniors, others provide postal and lottery services. What makes the chain particularly successful is that it is always open to new ideas and wishes. "In these economically unstable times, a village shop can only stay afloat if citizens can identify with it," says Christina Pfeiffer, who coordinates the project at the Schleswig-Holstein Agriculture Ministry in Kiel. In other words, they have to want to shop there.

The little shop in Gülzow can make ends meet because it offers a wide range of merchandise. The store's 75 square meters are packed to the ceiling with products. And its not just about your average groceries -- the store also doubles as a drugstore, stationery shop, furniture store and book store. "We've got to do whatever we can to keep our potential customers from just driving to the nearest city," says Schweim, who used to work at the type of place he's now trying to steer people away from.

More and more towns in other German regions have also taken to the modern corner shop concept, many of which are set up in the form of cooperatives. Over the last few years, more than 200 small-town shops have been set up in Bavaria and Baden-Württemberg alone -- and all on the villagers' own initiative. In Geretsried-Gelting, for example, a village in Bavaria, 280 people belong to their corner shop cooperative, whose shares can be purchased for €180 each.

Despite all the hype, management consultants are warning corner shop owners that they can't rely solely on villager loyalty. Once the novelty has worn off after the first few months, they say, the only thing customers will care about is whether they're getting their money's worth. And so, like the supermarkets, these businesses have to give a lot of thought to how to market their wares best. They need to offer brand-name items and discount alternatives -- and they must lure consumers into their stores with special offers.

Still corner stores have one business advantage over supermarkets: They can offer extremely popular local products. In Geretsried-Gelting, for example, this item is a bread that was designed by the coop's manager together with a baker -- and the only place you can find it is at the coop. Corner shops in northern Germany are also profiting from regional delicacies. The MarktTreff in Gülzow sells yoghurt, eggs, honey and sausages from the surrounding area, and every Tuesday a local fishmonger parks his van in front of the shop.

But the real allure of the corner store is quite different. "Most importantly," says Vera Poggenhorn, the MarktTreff shopper, "this is where you can find out first what's going on in the village." Indeed, the modern-day corner shop has become the new center for village gossip. And that's something neither discount stores nor supermarkets can cash in on.