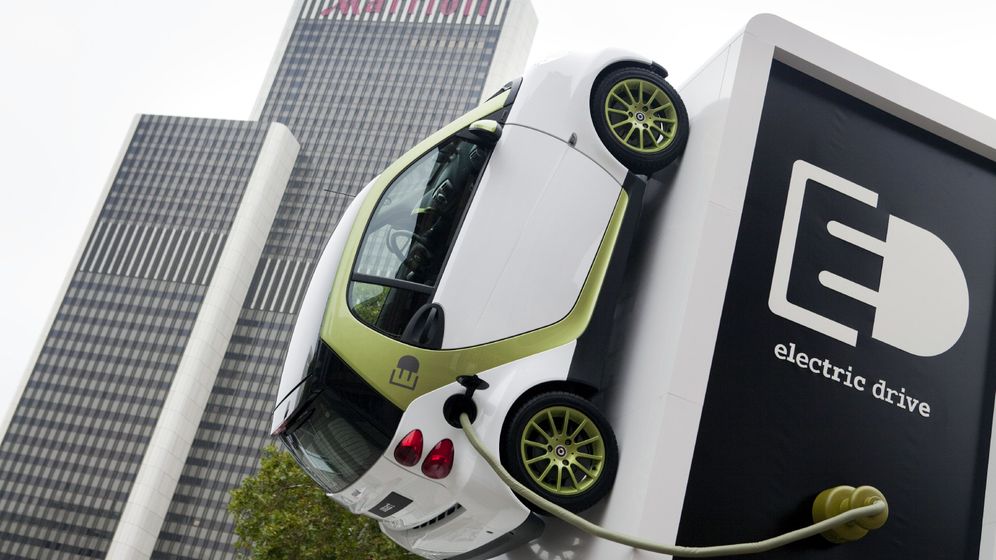 When BMW CEO Norbert Reithofer travels to meet with German Chancellor Angela Merkel next week, he won't be sitting in his usual spot, on the back seat of a chauffeured car. This time Reithofer will be driving an electric Mini Cooper, in which a battery weighing up to 300 kilograms (660 lbs.) will occupy the entire back seat area. Nevertheless, Reithofer's ride will still be more comfortable than that of Daimler CEO Dieter Zetsche. He'll be sitting at the wheel of a tiny Smart which has been converted into an electric vehicle.

But the two CEOs are only too pleased to put up with such inconveniences, as they introduce their companies' latest showcase products: cars with power sockets instead of gasoline tanks.

The chancellor has summoned more than two dozen senior executives, including the managers of energy utilities and technology companies, to a meeting in Berlin next Monday, where they will present the latest advances in the electrification of the automobile. The event is titled: "What needs to be done to finally achieve a breakthrough for the electric car?"

There is great concern that Germany's most important industrial sector could be falling behind internationally when it comes to this technology. Economics Minister Rainer Brüderle calls the electric car a "key technology for Germany as an industrial location," while Transport Minister Peter Ramsauer has already defined the subject as "the most important project of this legislative period." Chancellor Merkel, too, is calling it a "national task."

German automakers Daimler, BMW and Volkswagen have been tinkering with battery-driven vehicles for years, but others have already taken the lead worldwide. The most powerful batteries are not made in Germany, but in China and Japan, and Asian automakers have already begun series production of electric cars.

Their German competitors, on the other hand, do not expect to be ready for another two years. And while the federal government recently approved billions for its so-called scrapping premium, a cash-for-clunkers program intended to spur sales of new cars, Washington and Beijing have launched programs worth billions to promote electric vehicles.

But now, at least according to Merkel's plan, Germany is about to catch up with a vengeance. And the auto company CEOs Norbert Reithofer (BMW), Dieter Zetsche (Daimler) and Martin Winterkorn (VW) already know how. They want the government to help them out by introducing uniform standards for battery charging stations, as well as by providing billions in subsidies, first for research and development and later for the buyers of electric cars.

But by making these demands, the auto bosses are raising two important questions: Have they missed the boat on an important development yet again, as they did once before with hybrid engines? And why should the state help pay for their race to catch up with their foreign competitors?

Too Good to Be True

The development would be worrisome if the electric car were in fact capable of doing what politicians expect of it. The government's documents for the auto summit mention the many potential benefits of electric cars: how they will put an end to the sales crisis in the auto industry in one fell swoop, rid the environment of harmful emissions, guarantee mobility in cities and, last but not least, solve the storage problems associated with the production of alternative energy.

The seemingly wondrous properties of the electric car are being touted in Germany and elsewhere. In the United States, it is officially described as a "zero emission vehicle" -- words that reflect a dream too good to be true. Although the electric car has no emissions, the electricity to charge the batteries has to be generated somehow: through solar, wind or hydroelectric power, through nuclear power or in coal power plants. An electric car can be more or less environmentally friendly, depending on what makes up a country's energy mix.

"We have a perception problem," says Bosch CEO Franz Fehrenbach. According to Fehrenbach, if the industry says that a mid-range car will consume only 3 liters of diesel per 100 kilometers (77 mpg) in a few years' time, this generates little enthusiasm. For an electric car, however, "you get a massive round of applause," even though the carbon footprint of the 77-mpg car with an internal combustion engine is "smaller than that of an electric car."

The German Automobile Club (ADAC) has calculated that a Smart with a diesel engine emits 86 grams of carbon dioxide per kilometer driven. An electric Smart with its battery charged with electricity from coal power plants is responsible for 107 grams of CO2 emissions. In other words, its carbon footprint would be bigger, at least in China, where more than 80 percent of electricity is generated in coal power plants. But if the batteries were charged with electricity from sources based on the current German energy mix, the emissions would drop to only 71 grams.

No Other Choice for Carmakers

Even in this case, however, the benefits of the electric Smart over the diesel model are relatively modest. On the other hand, the costs of achieving those benefits are enormous. A vehicle in the lower mid-range class with an electric engine costs between €10,000 and 15,000 ($13,300-19,950) more than a comparable car with a gasoline engine.

Nevertheless, the major carmakers have no other choice. They have to put electric cars on the market. On the one hand, oil supplies are limited, which is why alternatives to the internal combustion engine must be developed. On the other hand, many carmakers will be hard-pressed to achieve the emissions targets planned in the EU for 2020 without electric cars -- "unless we build nothing but small cars with three-cylinder engines," says BMW CEO Reithofer. But such small cars are "not an option" for his company.

The German auto companies are latecomers with the electric car. But that doesn't translate into the demise of VW, Daimler and BMW. The e-car will remain a niche model for the foreseeable future, because of its high price and limited range.

Mitsubishi says that its i-MiEV, which is now being sold in Japan for the equivalent of €34,000, can travel 144 kilometers (89 miles) on a single battery charge. An electric Smart supposedly has a range of 135 kilometers.

But in a test conducted by the German motoring magazine Auto Motor und Sport, the electric Smart only made it 106 kilometers on a single charge, while the Mitsubishi's battery was empty after 77 kilometers, even though the heating system had already switched itself off automatically 10 kilometers earlier, to save electricity.

These ranges are sufficient for most people's daily commute to and from work. But they still need a second car with an internal combustion engine or a hybrid engine for longer distances. This will limit the uptake of electric cars.

According to a study by Deutsche Bank, about 5 million electric cars could be registered in the European Union in 2020, which would still only amount to 2 percent of all cars. "But even this proportion can only be attained," the study states, "if the costs of electric cars come down dramatically in the next few years."

The Future Is Mixed

The great e-llusion creates the impression that the future belongs to this engine technology and that this future is already underway. It is reminiscent of the euphoria surrounding biofuels, which were once touted as a clean alternative to oil. But those hopes were quickly dashed when tortilla prices went up in Mexico because farmland was no longer being used to grow grain and corn, but to produce energy plants instead.

It has long been clear in the industry that there will not be a single type of engine to ensure individual mobility in a cost-efficient and environmentally friendly way. Instead, cars will still be powered by classic internal combustion engines, as well as by hybrid engines, natural gas, biofuels and one day perhaps even with hydrogen. And, of course, with electricity.

"We want the battery technology, and we're working on it at full speed," says VW CEO Martin Winterkorn, "but it's important to tell people the plain truth." The costs are still too high, the ranges too short and the charging times for batteries too long. Safety is also a concern, at least with the controversial lithium-ion batteries. Laptop and mobile phone makers have already had to recall some of their products because of a risk that the batteries could catch fire and explode.

There is still a lot of research to be done. However, the government, in its draft of the closing statement for the summit on May 3, has already committed to paper its ideas on how it intends to promote the electric car.

For instance, it plans to support a rule that would allow cars with CO2 emissions of less than 50 grams per kilometer to be credited more than once when the consumption figures for a manufacturer's total fleet is calculated. That way one electric car could be used to offset several gas-guzzlers.

In addition, the government wants to start a "purchasing offensive" for cars with very low CO2 emissions for its own vehicle fleets. Whether it will provide additional funds to promote research is still unclear.

Some of the top executives invited to Merkel's event, on the other hand, are paying more attention to a more immediate goal, namely securing prestigious positions in the government's circle of advisers.

For example, they have been jostling for weeks over the role of spokesperson on the issue of infrastructure. A top manager at E.on was initially slated for the job. But then Siemens claimed the leading position, threatening that otherwise they would not participate. In the end, the Chancellery decided the matter by creating two positions. Both managers, according to the plan, will have the chance to be photographed next to the chancellor.