Workers at the Mercedes-Benz plant in Sindelfingen outside Munich aren't usually the rebellious types. They are proud of their jobs and of the cars they build. But last Wednesday workers at the plant were nothing but angry.

After their foremen had informed them, shortly before 10 a.m., that the next generation of the company's C-Class model series will no longer be produced in Sindelfingen, they walked out of the factory buildings en masse and headed for Building 1, where plant management has its offices. But the plant manager didn't have the courage to face his employees, and even Daimler CEO Dieter Zetsche chose to have a member of his staff inform them why assembly of the C-Class is being shifted to the company's US plant in Tuscaloosa, Alabama. 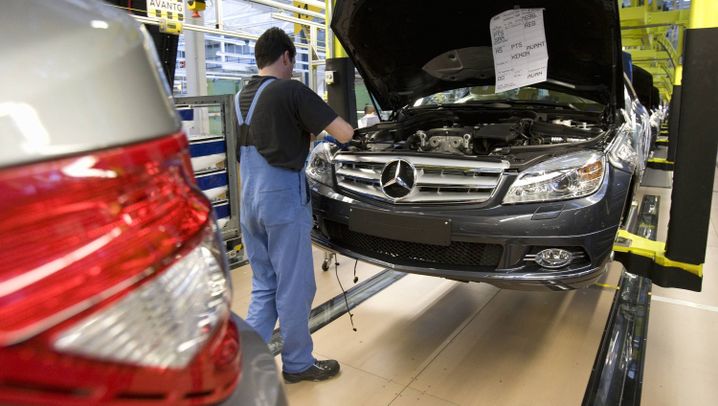 The employees were left with anger and a sense of helplessness. They had already prevented the outsourcing of production twice in the past by agreeing to do without breaks and supplementary benefits to bring down labor costs. But this time management wasn't even willing to discuss cost savings at the German plant. It was already clear that employees couldn't possibly take a pay cut large enough to offset the decline of the dollar.

Germany's entire export economy is suffering as a result of the decline of the American currency. In addition to the auto industry, companies like Airbus and steelmaker ThyssenKrupp, as well as machine tool makers, are having more and more trouble selling their products in the United States. They cannot raise prices to offset exchange-rate losses, because that would make their products too expensive. Conversely, not raising prices means selling their products at a loss.

Ineffective against an Ongoing Downturn

German companies have long attempted to protect themselves against the decline of the dollar with forward exchange transactions, in which they pay a fee to secure a guaranteed dollar-to-euro exchange rate. These forward contracts, which generally expire after one or two years, are helpful in hedging against a short-term decline in the value of a currency. However, they are ineffective against an ongoing downturn.

This leaves German automakers, steel companies and machine tool makers with only one option: to shift some of their production to the dollar zone.

This process has been underway for many years. Daimler, BMW, machine tool makers and suppliers started building their own factories in the United States as far back as the mid-1990s. For the most part, the trend has not resulted in the loss of German jobs thus far, primarily because the US plants were producing additional models. But that was only the first step. Now BMW and Daimler are expanding their US plants, and the jobs being created there are replacing workers back home. European jobs have become threatened by the weak dollar.

BMW has already decided to assemble its X3 sport utility vehicle in the United States in the future. The only reason the Munich-based automaker's decision has not triggered any significant protests is that this model was already being produced under contract by the auto parts supplier Magna in Graz, Austria, and not in a German BMW plant.

For Mercedes employees, on the other hand, the loss of the C-Class in Sindelfingen is hard to stomach. It serves as an example of how the weak dollar will only accelerate the loss of blue-collar jobs in Germany -- and not just in the auto industry. Other companies, such as steelmaker ThyssenKrupp, are also shifting production to the United States.

According to CEO Ekkehard Schulz's analysis, the company cannot remain competitive in the long term with its production facilities in Germany's traditional industrial zone, the Ruhr Valley. It will become increasingly difficult to serve the attractive US market with exports from Germany, says Schulz.

ThyssenKrupp has already invested close to €7 billion in two new steel mills, which are scheduled to begin operations in the next few months, one in Brazil and the second in the southern United States. The plants will process special types of steel used in the automobile industry, partly for the Mercedes-Benz and BMW plants in the United States.

Hardly anyone expects this trend to turn around in the foreseeable future. It will be difficult for the dollar, as a global currency, to regain its former strength. "I'm relatively pessimistic," says Michael Burda, a professor of economics at Humboldt University in Berlin.

Confidence in America's economic strength has been permanently damaged by such factors as its double-digit unemployment rates, an ailing banking sector and a rapidly growing national debt. Under these conditions, it only makes sense that the dollar would plunge in value. The value of a currency consistently reflects the strength, or weakness, of its economy.

At the same time, the decline of the dollar is also the result of an adjustment process the global economy is currently undergoing. The old symbiotic system -- America consumes, while the Far East provides the financing -- has been shaken since the financial crisis. The global economy is edging into a new equilibrium, using exchange rates as leverage.

As Burda explains, a cheap dollar helps the Americans return to exporting more and importing less, which in turn helps them remain solvent. "The fastest way to get there is through the exchange rate," he says, which is why the United States is doing so little to stop the decline of the dollar. The devaluation of its currency provides the country with an elegant way to pay off its debts.

This comes at the expense of the Europeans, as their currency gains value. This appreciation becomes a heavy burden for Europe's export economy, particularly for the epitome of the pan-European project, the aviation group EADS and its subsidiary Airbus.

Airbus is in a dilemma, because aircraft are paid for in dollars, even though the most important production sites are in France, Germany and Spain. As EADS Chief Executive Louis Gallois has said repeatedly, when the dollar loses 10 cents in value against the euro, it costs the group about €1 billion.

To remain competitive, Airbus has started outsourcing parts of its production and R&D, as well as building supplier plants in low-wage countries. In the fall of 2008, the company began assembling jets in its A320 series in Tianjin, China. Airbus now operates engineering centers in about a dozen countries outside Europe, including Russia, India and the United States.

The exodus seems to be unstoppable at the moment. Many prognoses even expect the euro to continue to rise. Ansgar Belke, an economist in the western German city of Essen, sees signs of a "significant climb" and believes that an exchange rate of $1.70 to the euro is realistic.

This doesn't bode well for Germany, the world's leading exporter in 2008 and now second only to China. Although only about 13 percent of German exports are shipped to the dollar zone, competitiveness is suffering in the key industries: machine tool production, chemicals, electronics and, most of all, the automobile industry.

On Monday, Daimler CEO Zetsche went before the roughly 15,000 employees in Sindelfingen to explain why the production of the C-Class had to go. He also promised that the 1,800 jobs eliminated by the outsourcing of the C-Class would be replaced by 2,000 jobs in other areas.

In 2006, a similar speech, in which he announced the elimination of 6,000 jobs, went well. Daimler employees showed faith in Zetsche's plan and offered him support. This time was different. During protests held last week, employees held up signs reading: "Zetsche Must Go." And on Monday, he was greeted with boos and whistles.