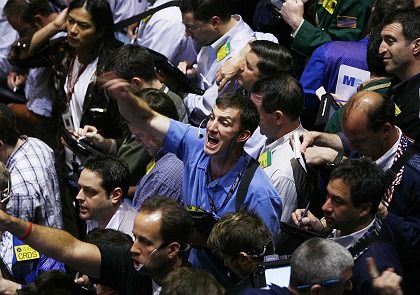 Traders at the New York Mercantile Exchange: Are they to blame for the oil price hikes?

Speculation. Manipulation. As politicians, business leaders, and ordinary consumers try to grasp the causes and effects of the historic surge in oil prices, attention turns to dark notions of exploitative financial maneuvering.

Are savvy traders cashing in -- or even cornering some portion of the market -- and thereby contributing to the painful runup that's shaking everyone from airlines to commuters at the gas pump?

Sounding a populist note on the Presidential campaign trail, Senator Hillary Clinton (D-N.Y.) has called for "cracking down on speculation by energy traders and market manipulation in oil and gas markets." ExxonMobil Senior Vice-President J. Stephen Simon, trying to deflect criticism of oil company profits, told a Senate panel on May 21 that speculation, along with geopolitical instability and a weak dollar, have created a "disconnect" between past price patterns and the current gusher to $131 a barrel. Motivated by a similar desire to direct outrage elsewhere, OPEC Secretary General Abdalla El-Badri also has stressed the role of traders in driving prices higher.

When oil jumps as much as it has, doubling since May, 2007, it's natural to assume that something striking must have changed. Some say the world is running out of the stuff; others blame market manipulation. The search for a culprit is understandable.

But persuasive evidence of manipulation by traders is, so far, lacking. Speculation -- placing bets on future prices -- is another matter. There's plenty of that, and it's generally legal. In fact, there's a good argument, if not conclusive proof, that sharply escalated trading in oil futures has contributed to price increases. But it's important to remember that the nature of the oil market -- specifically, the extreme inflexibility in both supply and demand -- is amplifying whatever influence traders exert on prices.

For there to be real manipulation, financiers somewhere would have to hold substantial amounts of oil off the market, planning to unload it in the future. Jeff Bingaman (D-N.M.), chairman of the Senate Energy Committee, has suggested that a recent trend of institutional investors acquiring oil storage capacity creates "concerns regarding potential market manipulation strategies." In a letter on May 27, he scolded officials with the Commodity Futures Trading Commission for "glaringly incomplete" testimony during recent hearings on oil speculation. He demanded more information about how the agency tracks trading.

But suspicion isn't the same as substantiation. To date, no one has pointed to particular examples of hoarding. CFTC experts testified that market forces are driving prices. The agency says it's working on a response to Bingaman's letter.

What can be corroborated is vastly increased trading levels as hedge funds, investment banks, pension funds, and other professional investors have poured money into oil and other commodities, seeking a hedge against inflation and alternatives to a shaky stock market. In the past five years investment in index funds tied to commodities has grown from $13 billion to $260 billion. More than 630 energy hedge funds are placing bets, up from just 180 in 2004, according to Peter C. Fusaro, founder of the Energy Hedge Fund Center, a trading information Web site.

Futures contract traders on the IntercontinentalExchange made bets on oil with a total paper value of $8 trillion in 2007, up from $1.7 trillion in 2005, according to US Securities & Exchange Commission filings. Over the same period the volume of futures contracts traded on the New York Mercantile Exchange more than doubled, although dollar figures aren't available. The over-the-counter market is even larger but difficult to measure.

With energy demand in China escalating and world supplies static, the influx of money has helped chase prices higher. "The hedge funds and speculators have run it up way beyond where it should be," says Malcolm M. Turner, chairman of Turner, Mason & Co., a refining consulting firm in Dallas.

In most markets, skyrocketing prices would result in increased supply and decreased demand. That would cause prices to ease. But the oil market isn't working that way. Supply is essentially fixed in the short term because it takes years to find new fields and bring them online. Demand, meanwhile, is also essentially fixed, since there is no ready substitute for gasoline, diesel, and jet fuel. Flush with cash from investors of all stripes, traders observing these conditions have bid prices up and up.

It's hard to calibrate the influence of speculation because most of the oil market is unregulated. That murkiness almost guarantees that conspiracy theories will continue to proliferate.

With Peter Coy and Christopher Palmeri