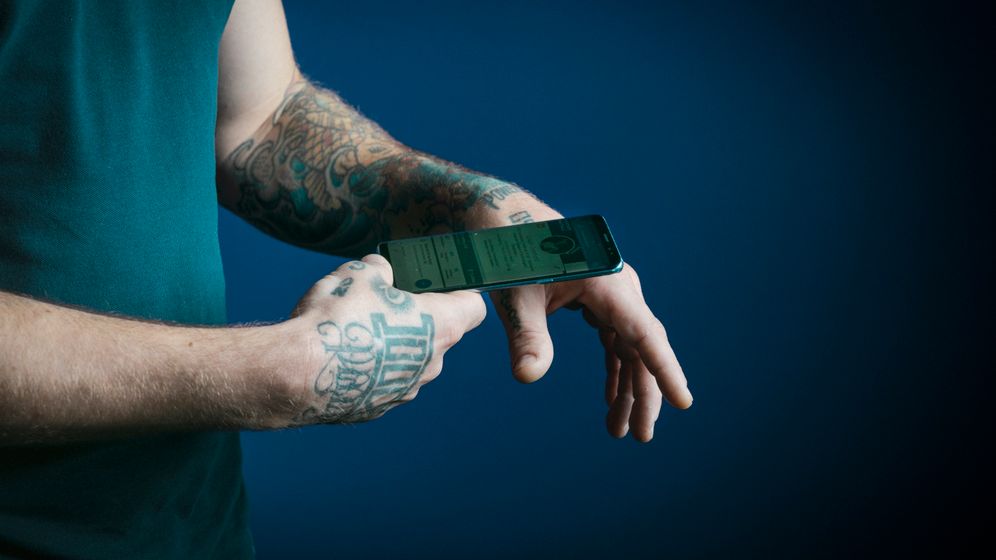 Photo Gallery: Data Beneath Our Skin

When the object beneath his skin first got implanted, Alexander Huber grabbed his hand pretty often. He stroked the little dent between his thumb and index finger and pushed it back and forth. It felt almost like when he first put his wedding ring on. Today, though, he has almost completely forgotten that the object is there. "It's become a part of my body," he says.

A microchip in a glass tube the size of a grain of rice has been implanted under the skin in his left hand, providing a digital interface to his body.

Huber uses it for work. The 39-year-old Swede manages the Scandinavian operations of the European travel and tour conglomerate TUI in Stockholm. The chip in his hand enables him to open doors in the office, activate printers and open electronic locks on cabinets or snack vending machines. All he has to do is press the back of his hand to the card reader. In earlier days, if Huber went to the office on a Saturday and somehow forgot his badge, he'd be stuck outside. With the implant, that problem no longer exists. "I'll never forget my hand," he says.

Huber was TUI Nordic's first employee to get chipped. Now, 115 out of the company's 500 employees wear the implant, and have done so voluntarily.

An estimated 5,000 people in Sweden, which has a total population of 10.2 million, have had chips planted under their skin, which they use to open their front door or even as a digital train ticket. But they have done so on their own. For a company like TUI to encourage employees to take the step is still the exception rather than the rule in the country.

The idea alone of employees getting chipped raises numerous questions. In Germany, a country where people struggle with the issue of whether they should even chip their pets for ID purposes, it would be a horror scenario. The mere idea of companies using chips to monitor their employees in the future is reminiscent of the digital totalitarianism described in Dave Eggers' novel "The Circle," when centers on a data-hungry corporation that controls the actions and thoughts of its employees.

Is this progress, science fiction, a gimmick or the breaking of a serious taboo? The chips themselves still don't do all that much. But if there's anything we have learned in recent years, it's that where data is collected, it also has the potential to be abused.

In the United States, a software development company called Three Market Square has offered to pay for implants for half of its 200 employees. They can use the chip to open doors or log in to computers. The company started the microchip implants "for fun," says CEO Todd Westby. But Three Market Square also now views itself as a pioneer in envelope-pushing technology. Westby believes that subcutaneous chips will eventually be used as passports or even as part of payment systems.

Huber says managers at TUI in Stockholm are hoping the implants will provide employees with a "playful approach" to digital technologies, while also sparking a broader discussion. How, for example, would people feel about checking into a plane with a chip rather than an identity card? "We need to be having those conversations," says Huber, who has been wearing a chip since November 2017.

At the time, TUI Nordic had organized a "Digital Safari" event for its employees. In the company's old brick building in Stockholm, experts demonstrated virtual reality goggles, language assistants like Siri and headbands featuring brain scanners. Also invited was Jowan Österlund, a big man with broad shoulders and numerous tattoos.

Österlund is Sweden's chip guru. A body piercer by profession, Österland earns his money through implants and lectures on biohacking, as the use of technology to optimize the human body is known. "I've chipped thousands of people," he says.

At the TUI event, he put on his rubber gloves, disinfected Huber's hand and inserted the chip using a large syringe. He felt a pinch for a moment, and then, quite spontaneously, Huber was TUI's first chipped employee. The only bad thing about it, he says, was the expression on his wife's face when he got home and told her about it.

He says employees literally stood in line to get chipped. Since then, TUI has covered the cost of any employee who wants to do so -- on the condition they are doing it at their own risk. Each implant costs around 90 euros.

The chip technology is still relatively simple. The data is transmitted using near field communication (NFC) technology, which manages the contactless transmission of data over short distances using electromagnetic waves. The TUI implants are passive, meaning they have no power supply of their own and tap energy from the reader to exchange their data. They also have very little memory: Less than 1 kilobyte of data fits on a chip, which corresponds to a few hundred letters.

Initially, Huber's semiconductor contained only a personal number, but he added a web URL later leading to his profile on the professional network LinkedIn. "Want to see?" he asks. Huber activates a smartphone app and rubs the phone over the back of his hand. The display lights up. Suddenly, his profile pops up, showing Huber in a suit and outlining his career, including his business studies at the universities in Uppsala, Sweden, and Tübingen, Germany.

TUI employees can also utilize their implants during their free time. Two gyms in Stockholm allow members to use the chips to check in. If an implantee has registered with Swedish national railway company SJ and also purchased an online ticket, all they have to do is have the chip scanned when the conductor comes by.

It's no coincidence the microchip technology has become so fashionable in Sweden. Trust in digital technologies and the authorities is high in the country. The Swedes are far ahead in Europe when it comes to cashless payments. Even small sums can be paid by card or using a mobile phone. TUI's Stockholm office is viewed as a digital testing laboratory.

Marianne Stjernvall is one of the company's employees who got chipped. "If I do something more than five times a month, I want to automate it," says the 32-year-old web analyst, who got a degree in applied computer science. Her stove can boil perfect eggs, her car warms itself up in the morning. She says she would love to see the implant interface with her smartphone in ways that could make her everyday life a little easier. "That would be brilliant," she says.

But at TUI's global headquarters in Hanover, Germany, some are shaking their heads in disbelief over the brave new world emerging in Swedish work life. There are a number of concerns over the risks implants pose for employees. For example, could TUI use geolocation to track or surveil them?

TUI manager Huber weighs in on the matter, saying that this is by no means the company's intention. "Surveillance and control aren't possible with the implant," he says, noting that NFC signals have a maximum range of 10 centimeters (almost 4 inches). When implanted in a body, that range is reduced to 1 to 4 centimeters because of the skin. Besides, the chip isn't connected to the Internet and it doesn't record anything. Huber feels he has little reason to be concerned about his data. "Nobody's gonna cut my hand off," he says.

Björn Holmén, TUI Stockholm's data protection officer, says he was "alarmed" when he first heard about the microchip. From the perspective of data protection and privacy, the 51-year-old says he now considers it to be harmless. Still, Holmén says he wouldn't recommend to anyone that they get chipped. "That's for each colleague to decide for his or herself," he says. Holmén says he doesn't wear an implant himself out, on principle and for fear of allergies.

Politicians in the European Parliament are much more concerned. In 2018, parliament commissioned a study investigating "the use of chip implants for workers." The report states that every EU citizen has the right to the integrity of the human body and that companies cannot force their workers to be chipped. But the study also advises against voluntary chipping -- for data-protection reasons. "The chips are not necessarily secure," the report concludes. The report also states that the possibility cannot be ruled out that they could get hacked or become the subject eavesdropping, cloning, deactivation or manipulation.

Patrick Kramer actively promotes chipping among German businesses. The 49-year-old runs Digiwell, an online store based in Hamburg, and, like Österlund, uses implants. He earns his money with lectures on "upgrading people."

Kramer estimates that around 4,000 to 5,000 Germany have privately had microchips implanted in their hands. At his workshop, he sells sets that allow people to implant a chip themselves. The sets, which include the implant, gloves and a syringe, cost 49.90 euros.

But German companies haven't exactly been leaping at the opportunity. Two years ago, the German electronics retailer MediaMarktSaturn invited Kramer to an event in the city of Ingolstadt, where he implanted microchips in 30 employees. The company, however, didn't create any possible applications for the chip -- nor did it have any intention of doing so. "It was just a gag at the time," says a spokeswoman.

TUI manager Huber is well aware of the great level of mistrust toward these types of technologies in Germany. In May, he gave a talk at Re:publica, an influential digital society conference in Berlin with the title: "Why the Nordics Are Digital Pioneers." When he asked the audience if anyone wanted a microchip, he was met with bewildered expressions. All people did, he says, was ask about privacy, security and health issues created by chipping. Although he can understand concerns about abuse, he also thinks it's a bit naive, especially given how most people have their mobile phones with them at all times and are allow themselves to be tracked as such. "A microchip is less invasive of privacy than a smartphone," he says.

Of course, that may not be the case for too much longer. Three Market Square is already working on a new implant that will include a GPS tracking system for the first time.

And then there's Elon Musk. The tech entrepreneur wants to connect people with machines. Musk is financing a startup called Neuralink in San Francisco whose researchers are working on a man-machine interface that they are currently testing on rats. It entails planting a sensor with thousands of electrodes in their brain and connecting it to a computer. The wafer-thin threads are to be used to record and control nerve-cell activities. The goal is for humans to be able to control machines using their minds.

Scientists outside the company consider it to be nonsense, but that hasn't stopped the billionaire. Musk has proved more than once that his crazy ideas are more feasible than some might believe.