The German organization expert Jürgen Kurz had never seen anything like it. An investment banker had called him in desperation, urgently needing his help. Tall piles of brochures, magazines, newspapers and documents -- some of which were 10 years old -- took up every available inch of space on his desk. There was just enough room to put down a cup of coffee. 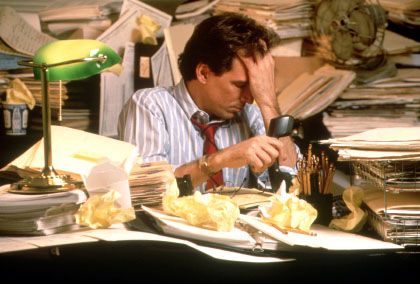 Not the way to do it.

"We office organization experts call someone like that a 'full desk' type," says Kurz, managing director of the Giengen, Germany-based consultancy Tempus, which organizes seminars for efficient offices. His client list includes blue-chip companies like Daimler and Lufthansa, but local banks and small companies like accountancy firms also seek out his services.

It's the same problem everywhere: Overloaded desks aren't just frustrating for their owners -- they also make employers unhappy. Academic researchers have long been studying the issue and have reached some surprising conclusions. According to a study on the "lean office" by the Stuttgart-based Fraunhofer Institute for Manufacturing Engineering and Automation, a good 10 percent of working time is wasted through "superfluous or missing work material" or "constant searching for the right document in chaotic file directories."

The researchers found that wasted time in poorly organized offices could eat up nearly one-third of annual working time. Over a year, that means there are 70 days in which employees are -- as Kurz puts it -- "engaging in pointless activity." It's a statistic which would shock any personnel manager.

This is where the tidiness experts, who offer seminars with titles like "From Full Desk to Empty Desk," come in. After the ruthless optimizing of factories and plants in the manufacturing sector -- especially the automotive industry -- during the 1990s and later, attention has now turned to the humble office.

Munich-based author and theologian Werner Tiki Küstenmacher, whose self-help book "Simplify Your Life" was a bestseller in Germany, argues that the process of "saying goodbye to chaos" begins with one's own desk. According to figures from the German association of office furniture manufacturers BSO, more than 18 million German employees and freelancers -- out of a population of 82 million -- have their own desk at work. In addition, there are a further 2 million desks in private homes. That's a lot of potential clutter.

"The desk is kind of like an exterior version of our brain," says Küstenmacher. "Whatever you have in your head, is reflected, almost magically, on your desk."

And that's not all: According to a representative survey by the German subsidiary of the office supplies retail chain Staples, a chaotic desk can be a "career killer." Four-fifths of the German CEOs surveyed see a direct relationship between order and productivity. "Tidy employees receive preferential treatment when it comes to promotions," says efficiency expert Jürgen Kurz.

But when it comes to assessing one's own tidiness, many people tend to gloss over the ugly truth. Faced with the Staples survey question "How would you rank your own abilities in regard to tidiness and organization?" some 45 percent of respondents opted for: "I am always perfectly organized." And almost 65 percent considered themselves to have "a talent for organization," while only around one-fifth admitted having "latent chaotic tendencies." Only 1 percent of respondents were honest enough to classify themselves as "hopeless cases."

Such incorrigible offenders could find themselves challenged in the modern working environment, however. The traditional personal desk with its potted plants and photos of Junior could soon become a thing of the past, according to some efficiency researchers.

In one vision of the workplace of the future called the "non-territorial office," mobile office workers, who are no longer anchored to a particular place, receive a networked desk on a temporary basis. At the end of the workday, all the individual worker's stuff disappears into a specially developed wheeled container, leaving the desk's surface clear for the next worker. German communications giant Deutsche Telekom is also researching chaos-resistant working environments in its own labs and is even developing a virtual computer "desktop" which is always tidy.

Kurz recommends a number of steps with which everyday chaos can be gradually tackled:

Serial mess-makers like to quote the Nobel prize-winning physicist Albert Einstein, who supposedly said: "Only the stupid need organization -- the genius controls the chaos." However experts have little truck with the common excuse that chaos promotes creativity.

Productivity gains of "up to 20 percent" can be achieved with a tidy desk, insists Hermann Scherer, the author of several management books -- a claim that casts doubt on the "creativity in chaos" school of thought.

But even Kurz admits that "humans are hunters and gatherers by nature" and that certain chronically messy creative types have developed surprisingly efficient search systems. But in the world of open-plan offices and hot desking, such individualistic approaches can lead to lower efficiency, territorial spats or frustration with those who are naturally tidy.

A change of mentality can pay off in terms of productivity, argues Kurz. "Nobody thinks they have time to tidy up," he says. "But somehow everyone finds time to look for things."