Free beer and bratwurst were being served at the construction site. Horst Seehofer, the powerful governor of Bavaria, was there, and eventually the sun even emerged from the clouds -- an auspicious sign for the Upper Franconia region's emergence into the solar age.

A pioneering spirit has taken hold in Germany, thanks to the government's radical reworking of the country's energy policies. Hardly a week goes by without the foundation being laid someplace in the country for a new solar farm, yet another biogas plant or an even bigger wind turbine. Fesseldorf, the town in northern Bavaria which just hosted Seehofer, will soon be home to one of the largest photovoltaic plants in the state.

The German government's plan calls for increasing the share of renewables in the country's energy mix to 35 percent by 2020. It is an ambitious goal in every respect. Not only will the current renewable energy share have to be doubled within a few years, the grid expanded and new power storage facilities installed. But Chancellor Angela Merkel's government is also somehow expecting the entire energy revolution to cost virtually nothing.

"According to our calculations, the cost of a kilowatt hour of electricity will go up by only one cent," says Economics Minister Philipp Rösler, head of Merkel's junior coalition partner, the Free Democrats (FDP). For an average household, this would correspond to the price of only one latte a month, says Environment Minister Norbert Röttgen, of Merkel's Christian Democrats. Germany is rapidly switching to green energy and at almost no additional cost to consumers. What conservative politician would have thought such a thing possible just a few months ago?

In reality, though, the official calculations have little connection to reality. According to an assessment by the Rhenish-Westphalian Institute for Economic Research (RWI), the politicians' estimate of the costs of expanding renewable sources of energy is far too low, while the environmental benefits have been systematically overstated.

RWI experts estimate that the cost of electricity could increase by as much as five times the government's estimate of one cent per kilowatt hour. In an internal prognosis, the semi-governmental German Energy Agency anticipates an increase of four to five cents. According to the Federation of German Consumer Organizations, the additional cost could easily amount to "five cents or more per kilowatt hour."

An internal estimate making the rounds at the Economics Ministry also exceeds the official announcements. It concludes that an average three-person household will pay an additional 0.5 to 1.5 cents per kilowatt hour, and up to five cents more in the mid-term. This would come to an additional cost of €175 ($250) a year. "Not exactly the price of a latte," says Manuel Frondel of the RWI.

The problem is the federal government's outlandish subsidies policy. Electricity customers are already paying more than €13 billion this year to subsidize renewable energy. The largest subsidies go to solar plants, which contribute relatively little to overall power generation, as well as offshore wind farms in the north, which are far away from the countries largest electricity consumers in Germany's deep south.

When Will the Sun Shine?

Photovoltaics, in particular, is now seen as an enormous waste of money. The technology receives almost half all renewable energy subsidies, even though it makes up less than one 10th of total green electricity production. And it is unreliable -- one never knows if and when the sun will be shining in Germany.

For economic and environmental reasons, therefore, it would be best to drastically reduce solar subsidies and spend the money elsewhere, such as for a subsidy system that is not tied to any given technology. For example, wind turbines built on land are significantly more effective than solar power. They receive about the same amount of subsidy money, and yet they are already feeding about five times as much electricity into the grid. In the case of hydroelectric power plants, the relationship between subsidies and electricity generation is six times better. Biomass provides a return on subsidies that is three times as high as solar.

"We are dumping billions into the least effective technology," says Fritz Vahrenholt, the former environment minister for the city-state of Hamburg and now the head of utility RWE's renewable electricity subsidy Innogy. In its most recent report, the expert council on environmental issues assembled by the federal government advocates sharply reducing subsidies for solar power.

"From the standpoint of the climate, every solar plant is a bad investment," says Joachim Weimann, an environmental economist at the University of Magdeburg. He has calculated that it costs about €500 to save a ton of CO2 emissions with solar power. In the case of wind energy, it costs only €150. In combination with building upgrades, the cost plummets to only €15 per ton of CO2 emissions savings.

Environment Minister Röttgen did in fact intend to significantly reduce solar subsidies through the Renewable Energy Act. But then came the nuclear accident at the Fukushima plant in Japan, which lead to Germany's radical change of course. Now, in order to phase out nuclear energy as quickly as possible, every kilowatt hour of electricity is badly needed, no matter what the cost.

German citizens will be able to see the consequences of solar subsidization on their next electricity bill. Since the beginning of the year, consumers have been assessed a renewable energy surcharge of 3.5 cents per kilowatt hour of electricity, up from about 2 cents last year. And the cost is only going up.

Since the first nuclear power plant was shut down, the price of electricity on the European Energy Exchange in Leipzig has increased by about 12 percent. Germany has gone from being a net exporter to a net importer of electricity.

According to the European Network of Transmission System Operators for Electricity (ENTSOE) in Brussels, Germany now imports several million kilowatt hours of electricity from abroad every day.

In displays on ENTSOE computers in Brussels, countries that produce slightly more electricity than they consume are identified in yellow on the monitors, while countries dependent on imports are blue. Germany used to be one of the yellow countries, but now that seven nuclear reactors have been shut down, blue is the dominant color.

The electricity that was once generated by those German nuclear power plants now comes primarily from the Czech Republic and France -- and is, of course, more expensive. The demand for electricity is expected to increase in the coming years, particularly with growing numbers of electric cars being connected to the grid as they charge their batteries.

Experts can only shake their heads in disbelief at the notion that solar roof panels could satisfy demand in the foreseeable future. The roughly one million German homes that are already equipped with solar systems can produce a maximum of almost 18 gigawatts of electricity. In theory, this is enough to immediately replace all remaining German nuclear power plants. But that's just the theory.

Subsidies for the Top

Solar panels only achieve their maximum capacity in the laboratory and at optimal exposure to the sun (1,000 watts per square meter), an ideal angle of incidence (48.2 degrees) and a standardized module temperature (25 degrees Celsius, or 77 degrees Fahrenheit). Such values are rare outside the laboratory. All photovoltaic systems are inactive at night, and they also generate little electricity on winter days.

These figures make it seem all the more astonishing that the German government is supporting solar energy so energetically. Subsidy rates for solar electricity have been gradually reduced in recent years from more than 50 cents per kilowatt hour to about 20 cents today. But because the solar modules, many of which are now made in China, are getting cheaper and cheaper, the business is still profitable. Solar systems that are connected to the grid this year are likely to yield returns of 5 to 9 percent this year, thanks to government subsidies. German government bonds and pension funds can't compete.

The redistribution effect of this subsidization of solar power is noteworthy, because it upends the conditions politicians would normally consider desirable. The wealthy southern states of Bavaria and Baden-Württemberg, where there are especially large numbers of solar panels, cash in while the rest of the country pays.

In addition, solar subsidies essentially migrate from the bottom to the top of society, with renters paying for the solar roof panels of homeowners. Holger Krawinel of the Federation of German Consumer Organizations puts it this way: "Ordinary citizens are now footing the bill." 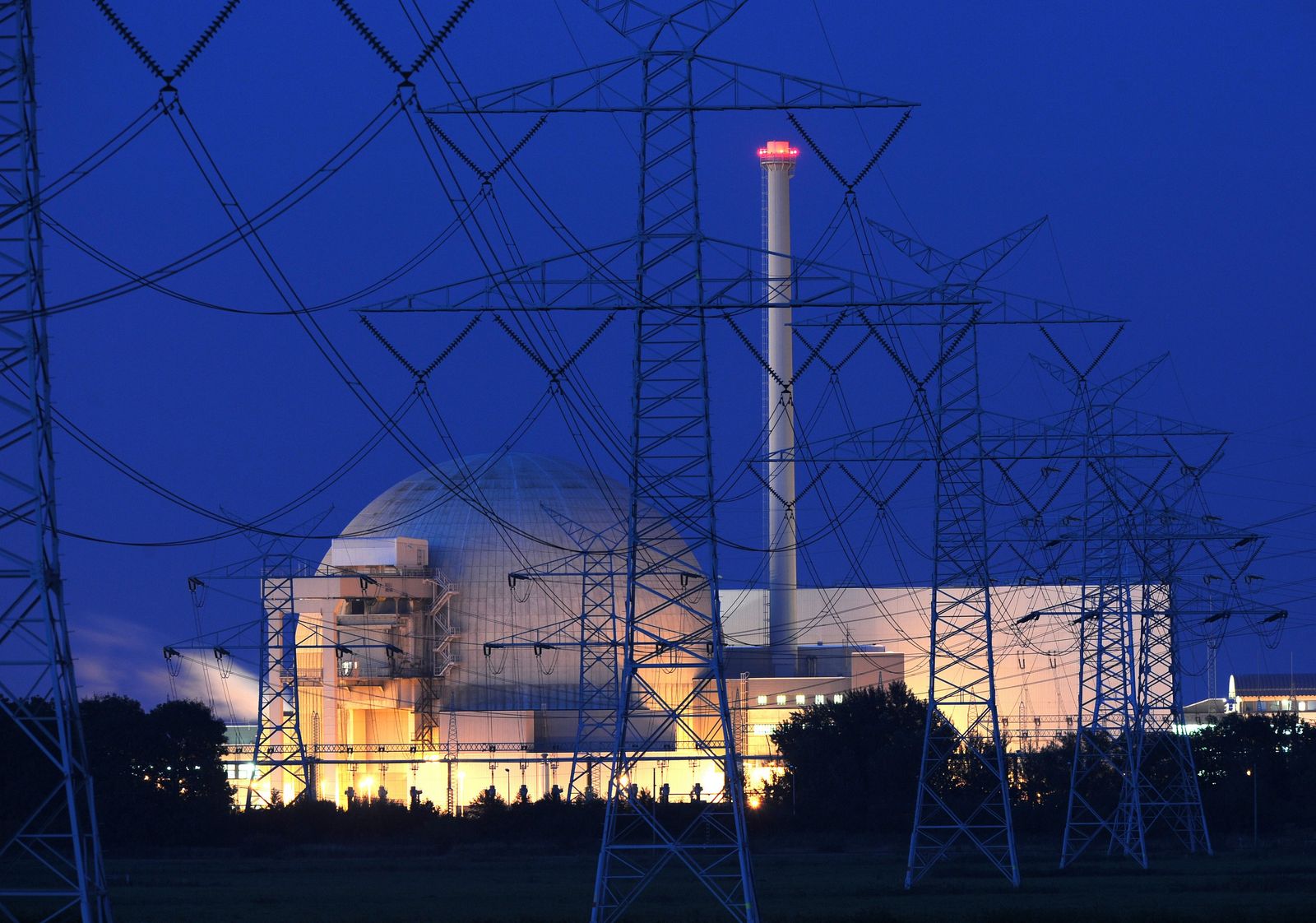 Germany's rapid phase-out of nuclear energy may be more expensive than first thought.