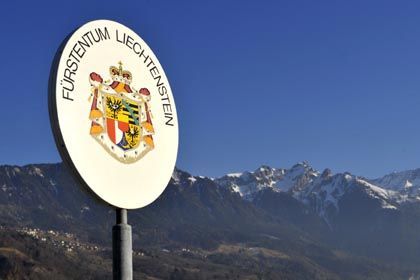 Liechtenstein's financial regulations are coming under the microscope in Germany.

The tax evasion scandal that has gripped Germany for the past week now looks like it could implicate German financial institutions, which may have helped their wealthy clients to hide their assets in the tiny state of Liechtenstein to avoid paying tax.

According to information acquired by SPIEGEL, some German private banks and other financial institutions are under suspicion for having administered foundations in Liechtenstein. Tax investigators are reported to have uncovered evidence of their involvement during a number of raids carried out over the last week.

The tax probe has unveiled 50 foundations in Liechtenstein with millions of euros in their accounts. Some German financial institutions are thought to have advised their customers to put their money in these foundations specifically to avoid paying tax.

The tax investigators have been searching banks, homes and offices since Monday, in an investigation that first went public with a raid on former Deutsche Post CEO Klaus Zumwinkel last Thursday, which forced him to resign. Prosecutors accuse him of avoiding up to €1 million in tax by keeping money in a Liechtenstein foundation. The alleged fraud came to light after Germany's foreign intelligence agency, the BND, paid an informant as much as €5 million for information on over 1,000 wealthy Germans who are alleged to have used the tiny Alpine state as a tax haven. By the end of this week, 70 out of a planned 700 raids are expected to have been carried out.

On Wednesday a government official was implicated in the probe. Karl-Michael Betzl, Bavaria's state commissioner for monitoring data protection, was suspended after his name appeared on the list of Germans thought to have hidden assests in Liechtenstein.

The tiny principality is suddenly very much under the microscope in Germany, with some politicians lashing out at its financial regulations. On Wednesday the head of the Social Democrats (SPD) Kurt Beck accused Liechtenstein of "robber baron" policies and suggested that sanctions might be needed to force the Alpine state to crack down on tax evaders.

Liechtenstein's Prime Minister Otmar Hasler arrived for a planned state visit to Berlin on Wednesday, the day after the state's hereditary ruler Prince Alois von und zu Liechtenstein lashed out at Germany for the way it was carrying out the investigation. "With its attack on Liechtenstein, Germany isn't solving its problems with its taxpayers," he said.

But on Wednesday Chancellor Angela Merkel did not seem in the mood for a softly-softly approach to smoothing over the diplomatic spat with Liechtenstein. She was forthright in setting out a list of demands that she expected Liechtenstein to comply with in taking action to tackle tax fraud.

Speaking at a joint press conference with Hasler, she said "time is of the essence," explaining that she expected to see the principality increase its cooperation with the Paris-based Organization for Economic Cooperation and Development to curb unfair tax practices, as well as implement the European Union's third money-laundering directive. Hasler assured his German hosts that his country was "on a path of reform."

Merkel said that Germany would like to see a deal such as the one between Liechtenstein and the United States, whereby the German government would be notified when any of its citizens transfered funds to the tiny principality.