Madrid's financial district has lost its shine. Near the iconic Puerta de Europa Towers in the northern part of the city, For Sale signs adorn newly completed office blocks while cranes sit motionless next to half-finished construction projects. In a local restaurant that tailors to the once-bustling lunch crowd, 31-year-old waiter Manuel Gutiérrez can't remember business ever being so slow: "No one expected the (economic) crisis to last this long," he says. 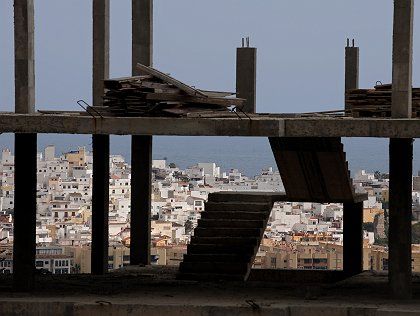 An abandoned construction site in the Spanish coastal town of Almunecar.

The recession may have taken some Spaniards by surprise, but its consequences will be felt for many years. After posting average annual gross domestic product growth of 3 percent over the past decade, Spain's economy is now expected to contract by around 3 percent this year. Unemployment already stands at 16 percent -- the worst in the European Union-and many economists reckon the level could hit 20 percent by 2010, the highest since the early 1990s.

"The crisis is getting worse and worse," says Fernando Ballabriga, director of the economics department at ESADE business school in Barcelona. "If things don't pick up in three or four months, companies will run out of money. People are now in a panic"

The severity of the crisis is forcing policymakers to take a hard look at the country's growth model. When credit was cheap and abundant, Spain's real estate and construction industries, which constituted a combined 20 percent of the country's annual GDP in 2007, boomed as firms such as Sacyr Vallehermoso and Metrovacesa invested billions of dollars in commercial and residential property. Although financial regulators steered Spanish banks away from US subprime assets-sparing them that toxic exposure-many, including partly government-owned savings and loans such as La Caixa and Caja Madrid, became highly leveraged on domestic real estate.

Now the downturn has wiped billions off property prices, thrown thousands of workers out of jobs, and left banks reeling with bad debt. Equally important, the recession has exposed costly inefficiencies in the Spanish economy such as low worker productivity and high administrative costs that were papered over during boom times. All of a sudden, Spain has turned from a highflier to the sick man of Europe.

The drastic change of fortune has prompted calls from the country's business leaders, politicians, and citizens for wholesale reform in how the domestic economy is run. Topping many economists' lists of desired structural reforms are changes to Spain's rigid labor laws and internal market. That includes everything from reducing labor costs to cutting bureaucratic hurdles for businesses and startups in an effort to jump-start the lagging economy.

"We need to change our growth model," says Rafael Domenech, head economist for Spain and Europe at Spanish bank BBVA. "Luckily, it's easier to change things in the bad times, when reforms are more acceptable to the entire society."

Still, policymakers may face an uphill battle to persuade Spaniards to give up some of their social benefits. Take the country's labor market: As in many European nations, Spain offers generous employment protections that make it difficult to fire workers-and thus make companies less willing to hire them in the first place. For instance, laid-off workers get up to 45 days of severance pay for every year they've been employed-so sacking a 15-year employee could cost nearly two years' salary. Such rules, says Hilario Albarracín, head of advisory services in Spain for consultancy KPMG, have led to an inflexible, costly workforce that finds it difficult to adapt to the current economic climate.

To boost Spain's competitiveness, analysts say, hard choices must be made. That includes cutting employee benefits, delinking worker salaries from inflation, and outlining inevitable job losses. Already, automakers such as Ford, BMW, and Citroën have reduced the number of shifts at their Spanish plants, with layoffs expected by the end of the year. KPMG's Albarracín figures many domestic companies will cut wages between 10 percent and 20 percent this year, as well as reduce employees' working hours. "People in Spain are prepared to accept lower salaries than had been expected in the past," he says.

That was true for Claudia Hervoso, a 29-year-old graphic designer from Madrid, who took an 8 percent pay cut in January. Faced with falling customer demand at the midsize marketing firm where she works, Hervoso says she was willing to accept a reduced salary if it meant she kept her job. "I have a mortgage to pay and can't afford to be unemployed," she says. "If I have to take a pay cut, so be it."

The other obstacle Spain must overcome, economists say, is the heavy bureaucratic burden placed on business. According to BBVA's Domenech, regulatory disparities among the country's 17 provinces make it expensive for companies to expand domestically. A Catalonia-based company looking to set up shop in Andalucía, for instance, would have to file paperwork in both Barcelona and Seville, adding extra layers of bureaucracy to the process of expanding a business. "The different rules produce competitive barriers within Spain's internal market," he says.

To solve this problem, Domenech believes more coordination between the Spanish regions is needed to reduce companies' administrative costs. Yet while such reforms would certainly boost efficiency, skeptics question whether provinces such as the Basque Country and Catalonia, which jealously guard their independence, would be willing to give up certain powers to boost the nation's overall competitiveness.

Market reforms may be unappetizing to some, but they will become more critical as Spain's unemployment rate continues to climb and the country's GDP goes from bad to worse. During the good times, Spaniards paid little attention to improving their global competitiveness. Now faced with the worst recession in generations, Europe's fifth-largest economy suddenly finds itself being forced to take action.