Bert Flossbach, an asset manager in Cologne, can reproduce the sound made by a phenomenon like inflation. He takes two coins out of his pocket and drops them.

One is a Krugerrand gold coin from South Africa. When it strikes the table, it makes a sound suggesting fullness, substance and real value. The other is a Russian kopeck, a coin so light that it seems to almost glide down to the table. "That's the sound of inflation," says Flossbach.

Flossbach is convinced that the euro will also degenerate into a soft currency. The enormous debts facing some euro-zone governments, he says, make it inevitable. Flossbach expects galloping, double-digit inflation -- and not in five or 10 years, but soon. The only missing ingredient, he says, is a trigger, a dramatic event that will put an "avalanche-like process" in motion.

Flossbach invests in tangible assets, such as precious metals and stocks. His customers have entrusted him with roughly €4 billion ($5.3 billion) in assets, an increase of some 40 percent over last year. His message has apparently struck a nerve.

Polls show that the majority of Germans, and especially older ones, have grown worried about their savings. Many are scared that inflation will consume their nest eggs, and that they will end up footing the bill for bailing out banks and entire countries. "The large figures have really alarmed people," says Manfred Neumann, a currency specialist in Bonn.

To avert economic collapse in the wake of the financial crisis, central banks have been pumping more and more money into the economy. In doing so, economists say, they have created the fertile ground on which inflation can now thrive.

Some politicians are also sounding the alarm. Frank Schäffler, a financial expert with Germany's business-friendly Free Democratic Party (FDP), notes how the European Central Bank (ECB) has been financing government debt by printing money. "In the medium term," he says, "this inevitably leads to inflation." Michael Fuchs, an economic expert with Chancellor Angela Merkel's center-right Christian Democratic Union (CDU), is particularly worried about commodities prices, saying that they contribute to "the greatest inflation risk."

Death by a Thousand Cuts

Last week, the price of a liter of premium unleaded gasoline climbed to above €1.50 (about $7.60 a gallon) at many German gas stations. This is almost as much as it was in 2008, when gasoline prices reached an all-time high. Consumers have also been taken aback by the many other increases in everyday expenses.

It begins at the breakfast table. Not long ago, many coffee roasters raised the price of a pound of beans by €0.50. And those who prefer their coffee sweet are likewise feeling the pinch. Within a year, the price of sugar on the world market has gone up by 25 percent. A croissant is also more expensive, bakers say, thanks to rises in wheat and energy costs.

A considerably larger dent in disposable incomes will come from fixed expenses such as the electricity bill. Starting next year, almost 600 utilities plan on raising their rates by an average of 7 percent. Consumers are also in for a shock when they realize that municipal fees for street cleaning, garbage collection and cemetery services will be going up significantly as well. According to the professional services giant Ernst & Young, 84 percent of German cities and towns are planning substantial fee increases.

For millions of citizens, rents are also expected to go up by an average of 2.5 percent, with significantly steeper rises in top markets. Indeed, even going on vacation has become noticeably more expensive. A vacation package to the Mediterranean resort island of Mallorca, for example, cost 12 percent more in December than it did a year earlier.

A Return to Normalcy?

Inflation is back. And it isn't, at first glance at least, such a bad sign. Indeed, inflation is seen as an indicator of economic recovery because companies can only raise prices when there is a significant increase in demand.

The German economy grew by 3.6 percent in 2010, the best figure since the fall of the Berlin Wall. It is benefitting from the fact that the world has recovered surprisingly swiftly from the shock of the financial crisis. Sales in the export industry have increased by more than 16 percent, which is a record. Until just recently, many German companies were sending their workers into short-time work programs. But now they are back to laboring full time. The auto industry is now even keeping its customers waiting -- it now takes up to six months for new cars to be delivered.

But perhaps the most remarkable thing of all is that, after many lean years, wages are expected to rise significantly once again. In the steel industry, unions and employers recently agreed to a 3.6 percent wage hike. Employees have also shown an increased willingness to spend their paychecks, which in turn provides retailers with room to raise prices.

The inflation rate in the euro zone recently rose to 2.2 percent. For Holger Schmieding, chief economist at the Hamburg-based Berenberg Bank, this should not yet be a cause for increased concern. As he sees it, Europe has simply enjoyed a unique period of extremely low inflation that is now coming to an end. "Things are returning to normal," he says.

This may be true for Europe, but the situation in other parts of the world is anything but normal. In China, India and Indonesia, inflation is beginning to jeopardize recent economic gains. In India, January food prices reflected a year-on-year increase of 18 percent.

Buyers must now pay 80 percent more in global markets for wheat, a key commodity in the world's food supply, than they did last summer. The poor are especially hard-hit. "We will be dealing with the issue of food inflation for quite a while," analysts with Frankfurt investment firm Lupus Alpha predict.

For several months now, commodities markets have been extremely active. The price of crude oil is once again approaching the $100-a-barrel mark, copper has grown almost a third more expensive over the last year, and the price of nickel is up by 60 percent. These increases are a consequence of immense demand in China, but also of the fact that more and more speculative money is flowing into these markets and driving prices up even further.

Reversing the Price Benefits of Globalization

The coke used in blast furnaces now costs about €350 a ton, or twice as much as it did a year ago. "And that price could be even higher tomorrow," fears Thorsten Brand, CEO of the ArcelorMittal steel plant in the eastern German city of Eisenhüttenstadt. Expenses for raw materials like coal and iron ore make up about 80 percent of total costs in his operation.

The coke used here comes from Poland, but the cost of the fuel is determined by markets in Australia, where devastating floods have inundated mines, driving up global prices. "The effects will become noticeable in the second quarter," says Brand.

All of this contributes to higher costs for ArcelorMittal, costs it is trying to pass on to its customers, the most important of which are automakers. But, sooner or later, doing so will only serve to boost inflation in Germany, warns Anton Börner, head of the Federation of German Wholesale and Foreign Trade (BGA). In fact, Börner expects to see a spike in global inflation by the end of this year.

Price increases for copper from Chile or iron ore from Brazil affect both the economies of those countries and the balance sheets of German companies. In addition, finished products from China, such as television sets or computers, can no longer be produced as cheaply as they once were. Now that China has slowly been appreciating its currency and significantly increasing wages, globalization's dampening effect on prices is dissipating.

Indeed, consumer nations like Germany are importing the inflation being felt elsewhere. The costs that wholesalers had to pay in 2010 were higher than they have been in a long time, having increased by 5.9 percent. Such a jump in costs is seen as an early indicator of future trends in consumer prices.

Given the situation, it would seem to make sense for the European Central Bank to intervene. It could raise interest rates so as to curb the economy and put a brake on inflation. Such is the approach that China is currently taking to fight inflation, having already raised interest rates twice.

Last Thursday, ECB President Jean-Claude Trichet issued a surprisingly clear warning against the risks of inflation. For now, however, he has shown little appetite for taking action.

And for good reason. "A shift in interest rates would certainly make sense for Germany," says Thomas Straubhaar, director of the Hamburg Institute of International Economics (HWWI). "But the consequences would be dramatic for most other euro countries." Higher interest rates, he points out, would make it even more expensive for cash-strapped countries in southern Europe to secure capital on the money markets. Such countries will be reliant on low interest rates for some time to come. "The Central Bank is in a dilemma that'll be hard to resolve," he concludes.

Trichet has been warned. In the summer of 2008, record oil prices prompted the ECB to raise interest rates to above 4 percent, despite the fact that there was already every indication that the economy was losing steam. Just a few weeks later, the collapse of the investment bank Lehman Brothers brought the economy to a complete standstill.

This time, it seems as though the ECB will do nothing -- and allow inflation to take its course initially. To stabilize the euro zone, Straubhaar says, "politically, inflation is the simplest of the bad options available. But economically it isn't any cheaper than a formal transfer union." Allowing inflation to continue, he says, will automatically result in a balance between German lenders and borrowers on the periphery -- "a sort of crisis valve" -- but, of course, one that comes at the expense of the lenders.

A Time to Spend?

But perhaps the amount of influence the ECB can have on a currency's stability is also overestimated. In the end, the critical factors are how consumers assess the risk of inflation and whether they are already so worried that they will shift their money into tangible assets. Consumers, though, do not always act rationally nor do they act alone. And once emotions take over, the resulting herd mentality can be dangerous.

The signs of this happening are unmistakable. The desire for gold, in particular, makes it clear that people have lost confidence. Real estate prices are likewise shooting up, at least in top markets like Munich and Hamburg. Buyers are snapping up properties in the anticipation that prices will go up in the future.

Consumers anxious about the future have traditionally held on to their money. But, given current circumstances, one starts to wonder whether they might even react to their fear by spending feverishly rather than saving frugally. Should confidence in the currency be shaken, theorized the sociologist Niklas Luhmann, then a shift to tangible assets makes sense. 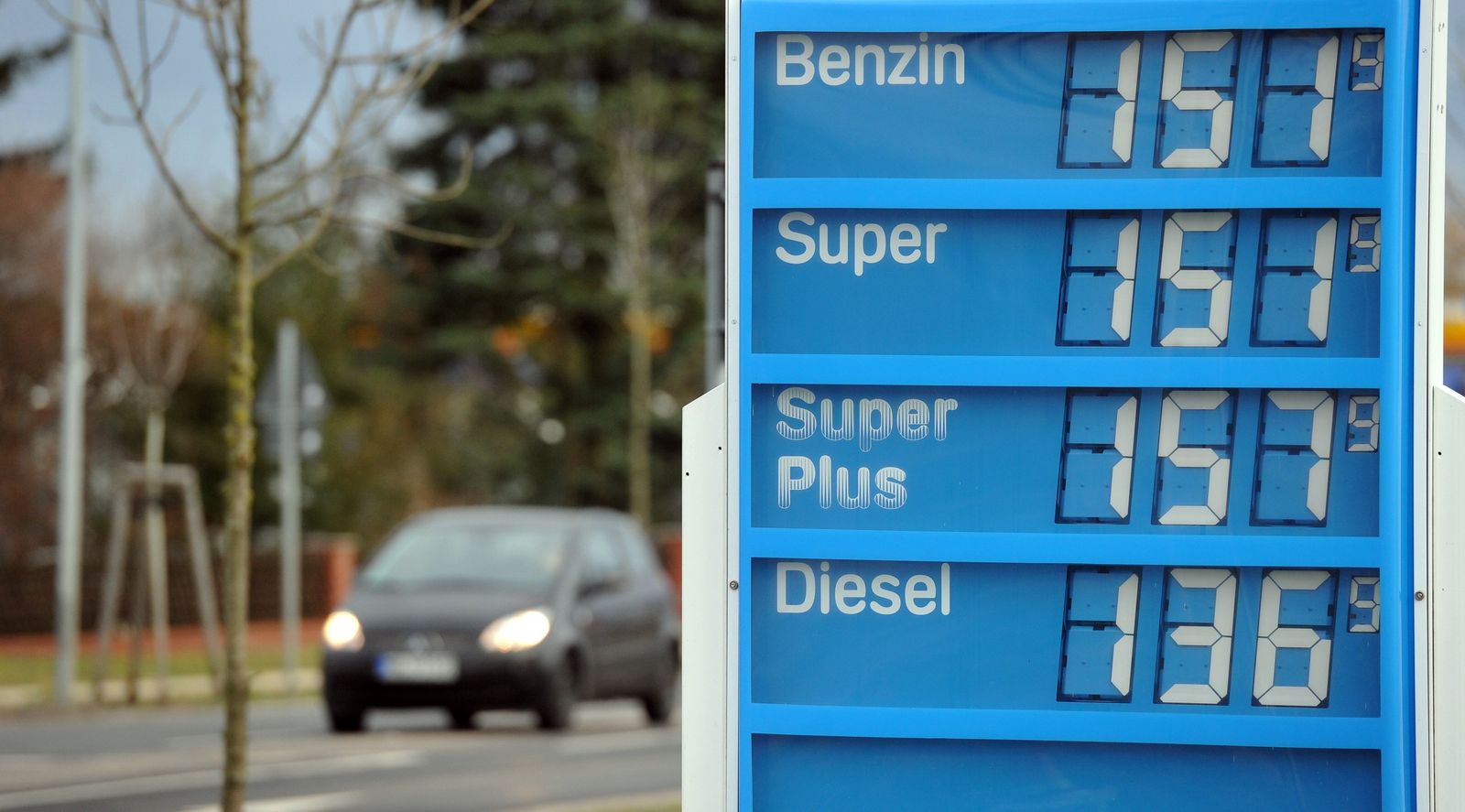 Prices for fuel have shot up in Germany in recent months. Other consumer goods aren't far behind.