The group that had gathered in front of Google headquarters in Mountain View, California was relatively small. Only around 100 protesters had turned out to lend offline expression to their anger at the corporation's latest plan.

The online community, however, reacted with far more alarm. Bloggers in the United States, Europe and Asia warned of a threat to Internet freedom, while consumer protection agencies said they feared interference with data traffic that could have unforeseeable consequences for media diversity. Germany's consumer protection minister, Ilse Aigner, declared that she had "no sympathy" for companies "distorting competition at the expense of the consumer."

The cause of all this commotion was seemingly minor, a joint statement issued by Google and telecommunications giant Verizon that outlined in seven brief bullet points the two companies' proposal for a future regulatory framework for the Internet.

Most of the suggestions were hardly spectacular, but one in particular packed a significant punch: The two corporations called for governments to leave it up to the market to determine whether telecommunications companies should be allowed to charge an additional fee for certain data-intensive services -- especially if customers want speedy access. Examples could include medical services, online games or power grid management.

Until now, the Internet has remained largely neutral, with no one discriminated against and no one given preferential treatment. Blog posts are transmitted just as quickly as Google's data. But the flood of information continues to swell. American technology corporation Cisco predicts that annual data volumes will quadruple by 2014 to around 767 exabytes (one exabyte is equivalent to 1 billion gigabytes) -- a capacity equivalent to 12 billion DVDs per month.

In other words, many billions of euros will need to go into upgrading the Internet over the next months and years. Telecommunications companies fear this will hardly be possible if they continue to play by the conventional rules. They have been flirting for some time with the idea of a two-tier Internet, in which users could pay to have their data transmitted more quickly. Google's latest advance suits these companies quite well.

The Internet, which has been a work-in-progress for the last 30 years, is transforming itself into something new yet again. More and more people access the Internet on the go from their cell phones. Instead of browsers, they prefer a quick click on an app -- a small additional program -- that lets them, for example, listen to the radio via their cell phone.

The Web is also being used to transmit increasing volumes of videos and music, both of which put enormous strain on networks. At the same time, the proportion of Internet traffic related to old-fashioned e-mail is shrinking. Instead, vacation videos and birthday photos -- things that in the past were more likely to be stored at home -- are now being shuffled back and forth online, uploaded to services such as YouTube, Flickr and Picasa (see graphic).

This relatively new approach is known as cloud computing. Thanks to the globally accessible "cloud," home computers have lost their previous importance -- users are increasingly able to store their data on central servers run by telephone or Internet providers.

This development increases the value of the global network, but it also raises some questions. Who, for example, should call the shots in the future? Who should profit from which aspects of the system -- the service provider, the content provider or the customer portal? And which laws should apply to these channels, which are vital to both private individuals and entire economies?

This discussion sees the collision of two very different concepts of freedom. One side insists that individuals should be able to freely access information at any time. The other calls for the companies operating the system to have the freedom to devise new business models.

Until now, the Internet operated following the so-called "best effort" principle, explains Wolfgang Kopf, head of regulation at the German telecommunications company Deutsche Telekom. This means that any information sent over the Internet by any customer is treated more or less equally, each data packet directed through to its destination regardless of the identity of the customer or the importance of the information.

Many telecommunications companies say it will be necessary to invest many billions of euros into the Internet in order to continue to ensure uninterrupted service. They also point out that the ones to profit so far have been providers such as Google, Apple and YouTube, who pay nothing while raking in profits. Investment costs fall instead to the telecommunications companies, who are simultaneously seeing more and more of their traditional business segments collapse. René Obermann, CEO of Telekom, doesn't want his company's role reduced to just providing Internet access for others.

As profit margins for pure Internet service providers grow ever narrower, companies are focusing instead on NGN, or next generation networking. Along with a platform for transferring data, NGN offers a separate control level which creates a simple, long-awaited ability to provide -- and charge for -- express services.

Are Customers Willing to Pay?

Alongside traditional data traffic, it would allow the establishment of paid services which the customer could decide to activate by clicking, for example, on a "high-speed" button. Medical and video applications, for example, could receive a special right of way, while certain search queries could be carried out more quickly and extensively -- provided, of course, that customers are willing to pay for this service, as they are already accustomed to paying for ringtones or apps.

Since Apple's iPhone conquered the market, telecommunications companies and service providers have been experiencing firsthand what happens when network capacity is insufficient. American telephone giant AT&T has been struggling for months with quality issues in its cellular network that have led to dropped calls and sometimes even complete service blackouts, especially in population centers.

Service flat rates provided along with smartphones such as the iPhone are one cause of these problems, as is content, especially radio programs and videos, that pushes networks to their limits. Both customers and providers are getting fed up.

"No one benefits from conditions like these," says Harald Stöber, vice president of the Association of Telecommunications and Value-Added Service Providers (VATM), an interest group representing the other German telecommunications companies that compete against former monopolist Deutsche Telekom. All these competitors find themselves in agreement, for once, on the question of redesigning the Internet. It could allow the creation of new business models in the Internet, Stöber suggests, and companies shouldn't be denied the opportunity.

Stuck in the Slow Lane

Torsten Gerpott, a professor of telecommunications studies in the German city of Duisburg, doesn't see Deutsche Telekom's plans causing massive changes to the system. Consumers already pay different prices for different types of access, he says, and in principle he has few objections to differentiation if the Web is truly experiencing capacity problems.

Nevertheless, critics see this as precisely where freedom for businesses collides with diversity of opinion. They envision, for example, large companies renting out a virtual fast lane for their services and content, with innovative start-ups and critical bloggers relegated to the channels for regular data, the online equivalent of a rough dirt road.

"Companies such as Verizon want to determine which data are transmitted faster, which slower and which not at all -- and who pays how much for it," says Gundolf S. Freyermuth, a professor of applied media studies at the International Film School in Cologne. "That amounts to attempts to colonize the new public sphere of the Internet."

Organizations for data protection and consumer rights have collected examples of situations in which Internet and telecommunications companies may have abused their power over data. In one 2004 case, according to German consumer rights centers, German Internet provider Freenet blocked its clients' access to certain websites that had expressed criticism toward the company's business practices. The proposed two-class Internet, these organizations say, would open the floodgates for this type of abuse.

Instead, critics want to legally codify the principle of "Net neutrality." Computer experts such as Kristian Köhntopp, though, warn that this buzzword is too imprecise. "Already, the Internet is often not neutral," Köhntopp explains. Many flat rate packages are shams, he adds, and "providers reduce speeds selectively without informing customers."

"Activists and companies tend to talk as if the two-class Internet were a vision of the future, but it already became reality long ago," says Bernd Holznagel, director of the Institute for Information, Telecommunications and Media Law at the University of Münster.

It especially bothers him that some companies selectively choose what to block. T-Mobile, for one, long kept its competitor Skype from being used on the iPhone. Now, Holznagel says, the competitor is penalized with a separate €10 ($12.60) fee.

"We need an antidiscrimination clause to make competition and innovation possible," Holznagel says. He also suggests that basic services should be openly available, as is currently the case with postal services or radio. That could create a compromise, something like a "one-and-a-half tier" Internet.

"Rather than symbolic politics, we need definitions of what Net neutrality really should be -- and this is where the Google/Verizon proposal is very helpful," Holznagel says. Now, he adds, politicians need to take the next step.

He feels, however, that attention is being distracted by other, less important debates, such as the ongoing controversy over Google's Street View service, which will be launched in Germany later this year and which has been criticized because of privacy concerns. "Politicians would rather jump on smaller issues like Google Street View," Holznagel says. "After all, photographing buildings is easier to understand." 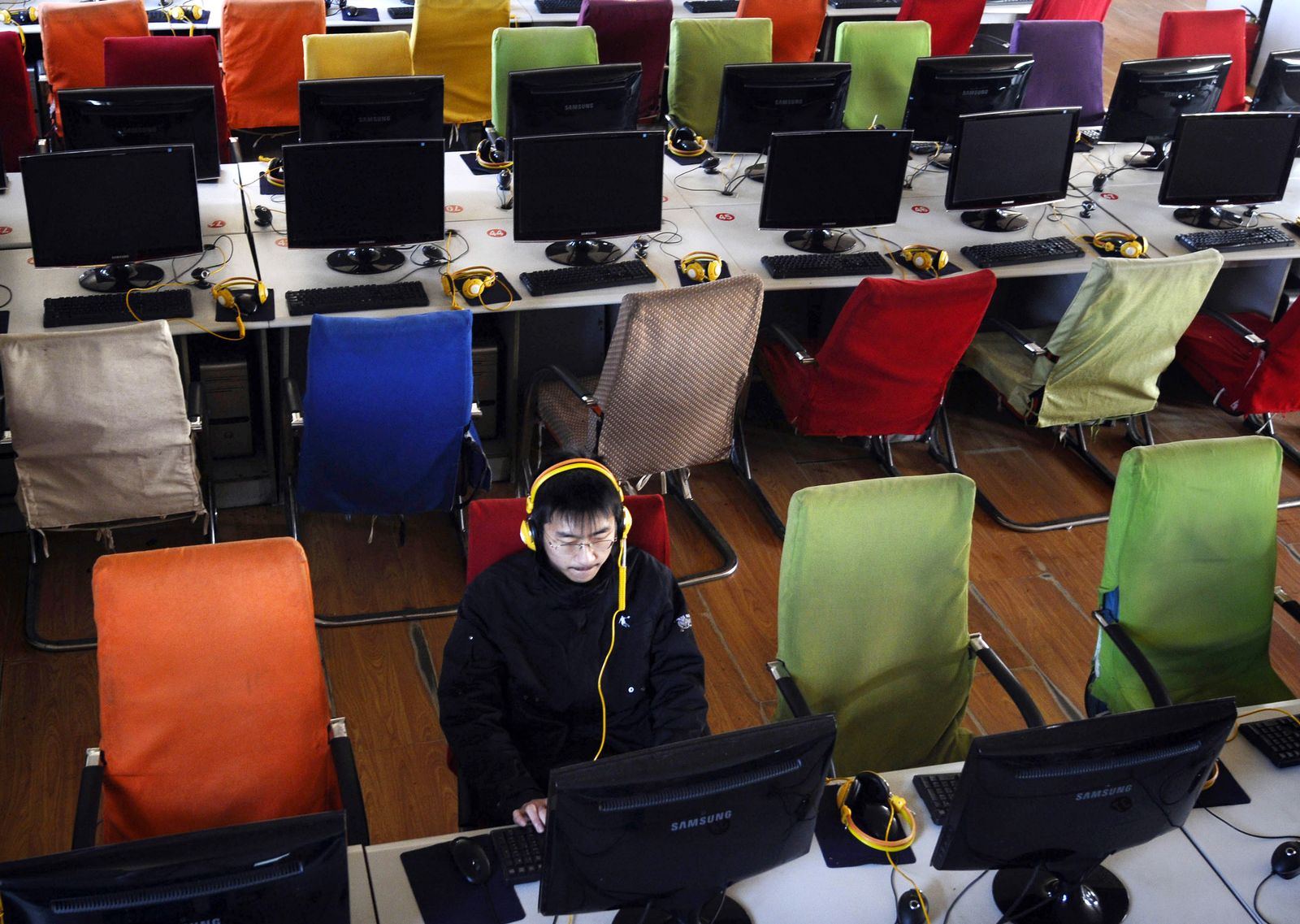 An Internet cafe in Changzhi, China: Web activists are concerned that a "two-tier" Internet could soon develop.