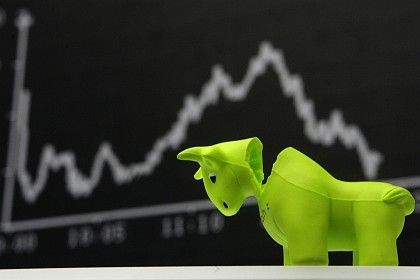 The bull has lost its head: Germany's blue chip DAX index continued to decline on Wednesday.

The financial crisis in the United States continues to dominate the headlines in Germany on Wednesday, with news that the government in Washington would provide a bailout package to insurance giant AIG after its near collapse. Earlier this week, after the US government refused to come to the rescue of investment banking firm Lehman Brothers, many had wondered whether Washington might also take a hands-off approach to AIG.

Although the market meltdown in the US is likely to have some impact on Germany, most editorialists on Wednesday urge calm -- with one major paper even stating that the national economy will continue to grow. Most are united in their view that, once the dust settles, financial markets will be a lot more transparent after this fiasco.

"At some point the financial crisis will be overcome. And there will still be a Wall Street, but its character will have changed. The investment boom has been just like any capitalistic excess: What's useful will remain. As the robber barons of the 19th century carried out their railway wars, money was stripped from countless investors, but in the end the United States got an efficient railroad network. In the current crisis, assets totalling billions have been destroyed, but important innovations will remain -- including the new technologies for securitizing loans and financial derivatives -- innovations that can have a positive impact when they are applied in a properly regulated market."

"In the future, investors will also continue to invest their money in mortgage bonds. They won't invest in nontransparent constructs, but rather in conservative covered bonds. As a whole, the business of investing will become less risky, less profitable, more strongly regulated and much, much more boring."

"Greed shows no bounds either in banking or in the credit business. In recent years, the market for so-called credit derivatives grew to $62 trillion. Now the market is under serious threat of faltering, and the central banks of the world are right to be on red alert. But even if the rescue mission managed by the Federal Reserve seems to succeed, the enormous volume of this market still poses the question: How could a multi-billion dollar insurance market be allowed to mushroom globally without any controls when each insurance service must undergo thorough regulation in each national market?"

"Politicians have long stated the potential dimensions of the threat. But they've done little about it in the last year. Provisional efforts to reform financial oversight are now appearing in Europe, with the EU's 27 finance ministers negotiating cross-border oversight of corporate finance and possibilities for quick interventions in the event of an acute crisis. But concrete decisions are still a ways off because the interests of the individual EU members are too varied. They aren't even united in their approach to dealing with the dubious decision-making process used by ratings agencies to vet the soundness of companies and states. But EU politicians don't have much time left to spare. The wildfire in the financial markets will continue to spread. It can only be contained if the entire financial oversight system is put to the test."

"Greed is the theme that resonates with both the schadenfreude of the outsider and the remorse of the insider. The words of the apostle Paul are appropriate: 'Money is the root of all evil.'  Max Weber, the great German sociologist of the beginning of the 20th century, argued that American dynamism was the product of the Puritan ethic and the spirit of capitalism, together forming an accord for worldly success for God's chosen people. First came the mortgage crisis in which first class banks mistook mountains of clouds for stable floors. Then came the banking crisis, which destroyed confidence. And in addition people were seduced by tricks made possible with computers. These are all trials and crises, but they will not spell the end of America's distinctiveness."

"The country will never convert to socialism, nor will it become a mega-state. Faced with similar circumstances, that might be the response of the pessimistic Europeans. America's culture of optimism -- which all too often gets on the Europeans' nerves because they consider it to be naïve and superficial -- also has the power to identify a setback as exactly that and not the end of the world."

"An even greater shock followed the day after the Lehman bankruptcy: AIG is fighting for survival. The markets were already prepared for it. The ratings agencies had downgraded it, pushing it deeper into the crisis. But can the banks and markets bear the AIG case? The entire finance system is hanging on by a thin thread at the moment. And the emergency fund created by international banks doesn't really have any financial strength. At most, it will allow banks to deal with each other more pleasantly -- because they know that it will affect them all if another financial institution collapses. Still, the central banks are providing large sums of money because they know that otherwise everything will grind to a halt."

"Any direct state support for AIG would undermine the courageous effort on the part of the US government to re-establish credibility in financial capitalism by refusing to help Lehman. The fact that the Federal Reserve Bank resisted giving any money until the last minute was understandable and correct. At the same time, to push a giant like AIG with its numerous customers up against the wall is altogether different than allowing the death of an investment bank. After all, what would Americans be expected to think if their insurance wasn't even safe?"

"The earthquake on Wall Street may have the walls shaking at some European financial institutions, but there is no acute threat of collapse here. So far, there is no evidence that the finance crisis is having any real impact on the German economy. Credit continues to flow; and the loss of capital has not been extraordinary. Nor have companies and consumers been forced to lower their consumption. So the good news is that Germany and Europe are not having economic trouble because of the finance crisis. The bad news, however, is that they still have an economic problem."

The center-right Frankfurter Allgemeine Zeitung uses the German economy as its jumping off point, noting that the latest crisis is likely to fuel calls for the government to create a spending program aimed at boosting growth as Berlin begins debating the federal budget.

"At the start of the federal budget debate, Finance Minister Peer Steinbrück is walking a tightrope -- he has to address the growing risks without painting too dark a picture. He has so far rejected a economic stimulus package despite support for one in some corners of his party. In fact, there are no reasons to justify a package. The German economy is in better shape than that of the US, Britain or Spain, which had their roots in the burst real estate bubble. Even if the forecast for next year is now worse than it was a shot time ago, the German economy will still continue to grow. Past experience shows that stimulus packages just create more debt."