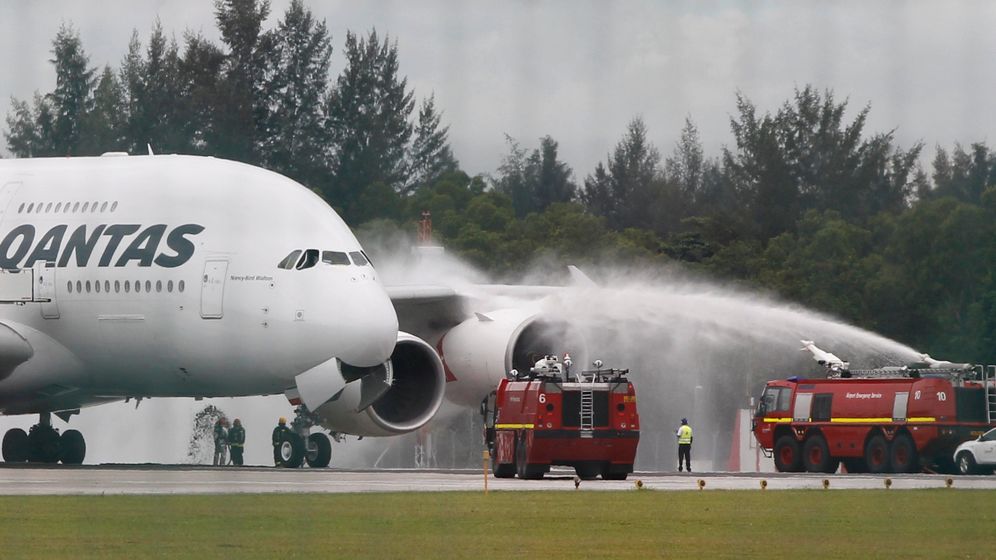 When passengers on Qantas Flight QF32 left their Airbus A380 aircraft on Thursday after it had completed an emergency landing in Singapore Airport, they could see the damage for themselves. The top of the aircraft's left wing was gouged, scorch marks were on the outside of a blown-out engine and a plate section depicting the airline's red kangaroo logo was missing.

One of the aircraft's Rolls-Royce engines had suffered a blow-out four minutes after take-off, shooting flames and shedding pieces of metal over the Indonesian island of Batam. After a tense 95 minutes the massive double-decker plane returned to Singapore, dumping fuel before making the emergency landing.

It was the most serious midair incident involving the super-jumbo since it debuted in October 2007 with a Singapore Airlines flight from Singapore to Sydney -- the same route the Qantas flight was taking on Thursday.

Qantas Airways CEO Alan Joyce said on Friday that it was too early to say exactly what caused one of the Airbus A380's four Rolls-Royce engines to fail and that a thorough investigation is underway. He said, however, that it did not seem to be a maintenance problem. "This is an engine issue and the engines have been maintained by Rolls-Royce since they were installed on the aircraft," he told a news conference in Sydney. Joyce confirmed that the engine failure had caused damage to the plane's wing. "That was part of what made this a significant engine failure," he said.

The Airbus A380 has been the prestige project of Airbus' parent company, European aerospace giant EADS, but the plane encountered significant delays and cost over-runs before it was finally launched in 2007. Since then there have been some problems, including an engine failure on a Singapore Airlines flight from Paris in 2009 and two tires bursting as a Qantas flight was landing in Sydney in March 2010.

On Friday the German press takes a look at the close-call and most argue that the trouble lies with the Rolls-Royce engine.

"The problem is not that one of the Airbus A380's engines failed. ... What makes the emergency landing such a serious incident is that parts of the debris damaged the wing. ... Rolls-Royce, the manufacturer of the engines, now has to ensure that such a thing never happens again, even if this means that the A380 is grounded for a time."

"Airplane manufacturer Airbus, as well as the airline Qantas, are the victims here. Yet the failed engine will not do their image much good, following the dramatic images of the damaged aircraft that were seen around the world on Thursday."

"The A380 was two years late coming to the market. The delay cost the company billions, caused an internal revolution and undermined confidence. ... Yet, despite all the criticism, one must not forget that the airlines and passengers praise the aircraft: A380 flights, despite somewhat higher ticket prices, are always full."

"The engine blow-out on the Airbus A380 that forced the Qantas flight to conduct an emergency landing on Thursday is above all a problem for the engine manufacturer Rolls-Royce."

"The disaster highlights the dilemma that the entire industry faces. ... The necessary and correct demand to make modern aircraft with lower emissions is taking its toll."

"No one would imply that the testing was consciously sloppy. However, it is obvious that when it comes to a flagship aircraft like the A380 there is immense pressure to get it on the runway as soon as possible. Those who demand more tests do not make any friends. The close call shows, however, how much is at stake."

"The damaged engine on the A380 has seen the Europeans' prestige project hit even greater turbulence. It still needs to be clarified whether it was a problem with maintenance, or a deeper construction flaw by either EADS or the engine manufacturer. ... Yet there is no need for panic. Air travel is safer than ever and the A380 is a superb piece of technology. However, the belief in the infallibility of technology that allows us to fly higher, faster and further is increasingly being shaken. And mega technology can lead to a mega-catastrophe. After all if an A380 were to crash, it could cause the deaths of 550 people."