The curtain seems to have finally fallen on the ongoing power struggle between Volkswagen and Porsche now that Porsche CEO Wendelin Wiedeking has fallen on his sword, clearing the way for a VW takeover of the luxury sports car manufacturer.

Wiedeking and his Chief Financial Officer Holger Härter announced their resignations after a 15-hour marathon board meeting to determine Porsche's future. The company also announced that it would increase its capital by at least €5 billion ($7.1 billion).

After a meeting of the Volkswagen supervisory board on Thursday, CEO Martin Winterkorn said the company would push ahead with merger talks. The two companies are likely to be fully integrated by 2011 and Winterkorn said that the Gulf state of Qatar would buy Porsche options on VW stock equivalent to a 17 percent stake in the company. "Volkswagen and Porsche have excellent expertise and can use their resources together even better," he said on Thursday. The details of the combined company are to be announced at a VW supervisory board meeting on August 13.

Wiedeking had been the mastermind behind Porsche's failed bid to swallow up the much larger Volkswagen which left it with 51 percent of the company and huge debts of almost €10 billion. The Stuttgart-based Porsche was thwarted in its efforts to amass the crucial 75 percent controlling share of VW, largely due to the financial crisis. The plan was also hindered by opposition from the unions and the state of Lower Saxony, which holds almost 21 percent of the company. The controversial VW law currently gives the state what is effectively a poison pill veto power to prevent hostile takeovers.

As Wiedeking falls victim to his own hubris -- albeit handsomely compensated with a hefty €50 million severance package -- his rival Ferdinand Piëch has emerged as the winner of the epic power struggle. The chairman of VW, who as a descendent of Ferdinand Porsche, also owns shares in the sports carmaker, had made no secret of his animosity towards Wiedeking. He was determined not to allow Porsche to succeed in its ambition to take over VW.

Most of the German newspapers on Friday hail Piëch as the victor in this family saga, but they are divided on whether Wiedeking deserves praise or criticism for his role at Porsche. Some also warn that the giant merged company could well fall victim to further internicine rivalries in the future.

"There is no question that in the end Wiedeking brought about his own demise. The attempt to take over the giant Volkswagen from Stuttgart was a foolhardy maneuver. It was a product of economic hubris and personal overconfidence. And it almost worked -- if Wiedeking and his CFO Härter had not had to face the united opposition of politicians and labor unions and, above all, if the financial crisis hadn't hit, things probably would have turned out differently." 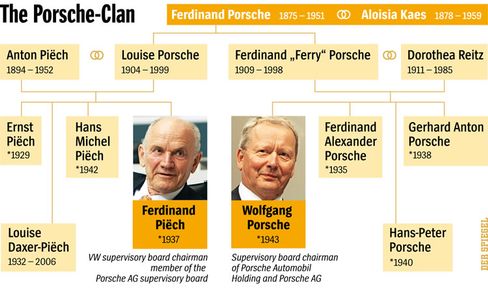 "Wiedeking achieved a great deal for the German automobile industry. And the future will be measured by his success. When he took over Porsche at the beginning of the 1990s, the ailing sports car manufacturer only had a turnover of €1 billion (compared to €8.6 billion for the 2007-2008 fiscal year) and losses of €120 million. Wiedeking turned the company around, reintroduced the 911, expanded other Porsche lines and used the know-how of VW and other specialists."

"Profits over the last two years may well have been grossly inflated by the VW speculation, yet it is not only the Porsche clan that is greatly indebted to Wiedeking. He was worth the money."

"It may well be that this very reputation was what got under the skin of that other successful executive in Germany's car industry, Ferdinand Piëch. The conflict between Porsche and VW was also a power struggle. And this the moral of the story is this: If Porsche and VW want to ensure a good future, then personal ambition has to take a backseat to the responsibility for hundreds of thousands of jobs and billions worth of assets. That is why the Porsche clan has to come up with a structure which excludes family disputes that damage the company. Porsche needs a crystal clear and transparent division between the family regime and company management."

"A severance package, never mind one that is so huge, cannot be justified. Wiedeking brought the sports car manufacturer to the brink of disaster. He got it into his head that he could take over the much bigger Volkswagen with a surprise attack. He had come up with an apparently ingenious plan: the takeover would finance itself through complicated and highly risky stock market speculation. Wiedeking, intoxicated by his success as Porsche boss, believed that he could throw VW and the entire financial world off guard. However, the plan was a spectacular failure. Porsche was left with billions of euros in debt, now it has to first of all write these debts off and will then become VW's 10th brand."

"Wiedeking is mainly to blame for this disaster. At the beginning of the '90s he took over Porsche during a severe crisis and turned it into the most successful carmaker in the world. Now he has gambled away its independence, the most valuable capital such a proud company can possess, and has thus destroyed his life's work. It doesn't matter how much he achieved before, Porsche will now be managed from Wolfsburg. That is a terrible blow for Porsche and its employees."

"An era in German carmaking history has come to an end. The Porsche legend may live on but the days of the proud sports car manufacturer as an independent company are numbered. The family-run luxury carmaker will now be taken over by a huge new company, whose structures and methods of decision-making remind one of a state-owned combine."

"And yet aside from the understandable bitterness and melancholy the only real loser is the dismissed CEO Wendelin Wiedeking. Taxpayers can be happy that the crisis is being solved privately. For the Porsche and Piëch families, there is the consolation that they still have the majority stake in Germany's biggest industrial company. And the employees can hope that VW will appreciate the value of the Porsche brand and know how to maintain it. In the long term Porsche had no chance of surviving as a single company."

"If VW succeeds in avoiding acting like victors and perhaps learns from Porsche's efficiency and quick decision-making, then it could be the basis for a new golden era: an integrated global company that in the long term could even knock the world's No. 1 carmaker, Toyota, off its throne."

"Piëch would not have been satisfied with anything less. He  is the prototype of the patriarch, for whom power and potency count above all else. He brought VW into the luxury class with Phaeton, Bugatti and Bentley. Porsche fits into this concept."

"However, this was not primarily about a sophisticated strategy for Volkswagen's future. It was above all about power and the question of whether the Porsches or the Piëchs would prevail in the struggle over Ferdinand Porsche's legacy. Ultimately it was about a new version of the ongoing family feud. And therein lies the real problem for VW. Because when the 72-year-old Piëch is no longer there, then a new power struggle is bound to emerge."

"The future of a company that will soon be the biggest carmaker in the world with almost 400,000 employees will be decided by the Porsches and Piëchs at home on their leather sofas. It will be vital to strengthen the forces on the supervisory board that do not belong to families, in order to ensure that VW is not ripped apart by the coming power struggles. The VW law will help in the transition period, but that will probably soon be overturned by the European Union. In the medium to long term, there should be a different formation of the supervisory boards at VW and other big companies."

"If external experts as well as the share owners and employees have a say, then it will be much harder to maintain a policy of running a company that is based on the will of the lord of the manor."