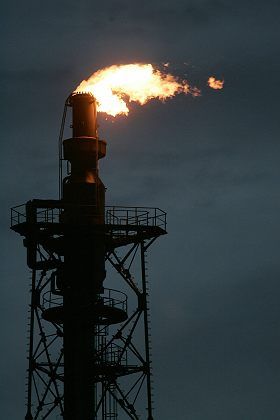 The EU energy market is facing a shake-up but Brussels doesn't want foreign investors to swoop in. Russia claims Europe is being "hysterical."

European Union moves to restrict foreign investors' access to its energy industry have not gone down well in Moscow. The Kremlin described the Europeans as "near hysterical," while Russian energy monopolist Gazprom lashed out at what they called "economic nationalism."

The Russian wrath is aimed at EU measures to split up its energy giants, which Brussels now says should apply to non-European firms too, in order to prevent foreign energy giants from snatching up European firms.

Dmitri Peskov, the Kremlin's deputy press secretary, told the Financial Times that "measures to discriminate against Russian companies would be totally unfair," and warned that Moscow would use "any legal means possible in accordance with international law to ensure equal access to markets for its companies."

He said that European reaction to Russian energy expansion verged on the "near hysterical" and insisted Russia was a reliable energy supplier. "Even at the height of the Cold War, Russia did not once cut off energy supplies," he said.

Russia's state energy monopoly Gazprom echoed the Kremlin's fury. "Unfortunately we see a tendency towards economic nationalism in many European countries," the company's deputy director Alexander Medvedev told the newspaper Süddeutsche Zeitung on Thursday. He said that it was "short-sighted" for any country to erect barriers to protect its own companies when there was "no danger to its economic interests." Medvedev confirmed that Gazprom was interested in investing in Europe. "We have the products that they need. And we have the capacity to bring these products to where they are needed," he said, adding: "A strong Russia and a strong Gazprom are good for Europe."

The ruffled feathers in Russia come after the EU confirmed that it was looking at a range of measures to protect European energy companies from being taken over by foreign investors. The protective measures will form part of a package of energy legislation to be presented in Brussels on Sept. 19. The most controversial proposal is one that would force EU companies to separate energy production from distribution in an effort to increase competition and reduce prices.

A number of former state-owned energy companies currently dominate the sector, making it next to impossible for new competitors to enter the market. But many EU countries have voiced fears that any "unbundling" could leave the companies wide open to the attentions of unwanted suitors, particularly Gazprom. Brussels now wants to alleviate these fears. On Thursday EU spokesman Ferran Tarradellas Espuny told reporters: "If there's unbundling, there is going to be unbundling for everyone."

The EU is still mulling over how best to prevent foreign companies from taking advantage of market liberalization. One possibility is a reciprocity clause, which would hit countries that place any limits on European investment. Alternatively, Brussels could declare the energy sector a "strategic industry," thereby protecting it from non-EU bidders.

Concerns about the reliability of Russian energy supply have done little to endear Gazprom to European hearts, particularly after supplies to Europe were affected by disputes between Moscow and governments in Ukraine and Belarus. Europe is heavily reliant on Russia for its energy supplies -- Gazprom already supplies a quarter of the EU's gas and oil and this is set to increase to up to 70 percent by 2030.

This has made the prospect of Europe's own energy industry falling into the clutches of a Kremlin-controlled Gazprom all the more worrying for some. EU spokesman Tarradellas Espuny told SPIEGEL ONLINE that Brussels didnt want to see energy companies "ending up in the hands of investors whose political goals were more important than their economic ones."