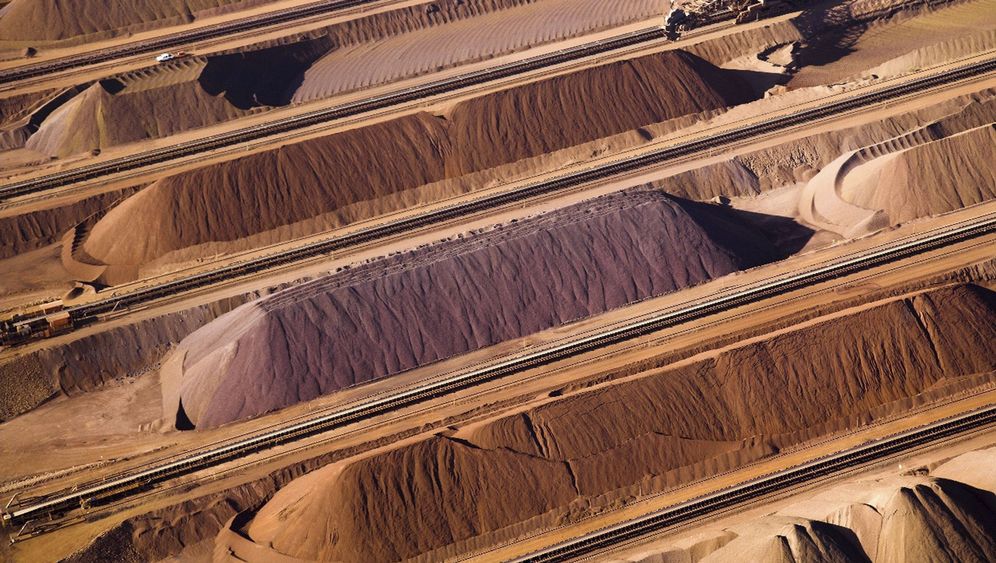 SPIEGEL: Mr. Schulz, while the world economy is ailing, steel prices are climbing to new highs. How does that fit together?

Ekkehard Schulz: It's easy: As a steel producer, we depend on massive quantities of mineral resources. We need coking coal, nickel and, most importantly, iron ore. In recent months, prices of the latter resource, in particular, have downright exploded. We can't do anything to compensate for that fact.

SPIEGEL: We're familiar with that line. It's always someone else's fault.

Schulz: In this case, it's correct. There are only a few large iron producers in the world. They are located in Brazil and Australia. And we are completely at the mercy of the prices they set.

SPIEGEL: You are referring to mineral resource giants like Rio Tinto, Vale and BHP Billiton. But ThyssenKrupp has been working together with them for years. What has changed?

Schulz: The contracts. In the past, we always signed calculable annual contracts with the iron suppliers, contracts in which the price was set for the entire term. Now the three producers that dominate the market have suddenly dictated quarterly contracts, in which a new price that is linked to the volatile spot market is set for each quarter. This has fatal consequences.

Schulz: Last year, we were still paying about $60 (€48) per ton of iron ore from abroad. Now it's more than twice as much. And the price on the spot market has gone up even further since the last contract was signed. The new system is currently driving up the price of steel more and more, thereby jeopardizing overall economic development.

SPIEGEL: But it isn't unusual that a price changes on the market and that it continues to rise as demand increases.

Schulz: That's correct. But iron ore isn't even scarce. Unfortunately, it just happens to be controlled by a few large producers. And they are irresponsibly taking advantage of their power in the marketplace.

SPIEGEL: Those are serious charges. Can you back them up with evidence?

Schulz: The German Federal Cartel Office in Bonn, as well as the European Commission, are looking into the case, and we are supporting them in their efforts. Besides, we have also asked the German government for help.

SPIEGEL: What should it do?

Schulz: The government has promised us that it will address the issue at the next G-20 summit of world leaders in Toronto in June. It intends to advocate a fair and sustainable balance between nations that process natural resources and those that produce them.

SPIEGEL: Isn't it somewhat excessive to be addressing the issue in such a forum? We're talking about the pricing system for iron ore and steel

Schulz:  and therefore the entire global economy. In Germany alone, more than 35 percent of industrial added value depends on steel. It would be impossible to calculate the cost of any bridge, high-rise building or auto production if the price or iron and, as a result, steel were constantly changing and became a pawn for speculators.

SPIEGEL: What role do speculators play?

'A Massive Bubble Is Threatening to Develop'

Schulz: The new pricing system opens the floodgates to speculation and manipulation. A massive bubble is threatening to develop in the natural resources market. Its dimensions could even exceed that of the real estate problem in the United States two years ago.

Schulz: No, not at all. Year after year, about two billion tons of iron ore are consumed on the world market. Foreign trade accounts for about half of that. Only an extremely small portion of that total is sold on the spot market. But a few major contracts in that market are enough to massively manipulate the price. This hasn't been a significant problem until now, but with the new system, in which pricing is based solely on the spot market, this kind of influence affects the entire global trade.

SPIEGEL: Who would have an interest in that?

Schulz: Primarily the producers and the countries where they are based, which, in some cases, siphon off some of the profits in the form of special taxes. But we now know of a few major investment banks that are painstakingly preparing to enter the ore market.

SPIEGEL: Who are they, and how are they preparing?

Schulz: I don't want to mention any names here, but they are banks that were also involved in other big speculative bubbles. They are currently active in our markets, hiring natural resource specialists, buying trading companies and leasing storage facilities at major ports, where they can temporarily warehouse ore for speculative purposes. They see an opportunity to make billions in profits.

SPIEGEL: By driving up prices on the ore market?

Schulz: By disconnecting prices from the real economy and the natural resources from real consumption. This has already happened with nickel. Speculators and banks are already turning over 30 times as much nickel in the markets than is actually consumed in steel processing and other areas. In the process, the price per ton fluctuates between €10,000 and €50,000. Imagine a situation like this in a large-scale natural resource market like that of iron ore. The consequences would be devastating.

SPIEGEL: Many large corporations are establishing internal trading departments today and becoming involved in the market trading in natural resources. Is this an option for ThyssenKrupp?

Schulz: No, we do not wish to participate in such speculative profits. Of course, we have to protect ourselves against extreme price fluctuations. To that end, we too conduct transactions on the markets, in which, for example, specific quantities are ordered, more or less automatically, within specific price ranges. But in our case, there is a real economic purpose to these so-called derivatives, which allow us to hedge against price volatility.

SPIEGEL: This isn't the case with banks?

Schulz: No, with them it's purely a question of betting on certain price developments, and earning profits from buying and selling without any connection to the real economy. This trade in derivatives, as undertaken by funds and banks, urgently requires regulation. This is the argument we presented in Brussels and to the German government.

SPIEGEL: In the past ThyssenKrupp, unlike competitors like ArcelorMittal, failed to acquire holdings in ore mines. Isn't that the real reason for your concern?

Schulz: No. Speculation in natural resources is not just a problem for ThyssenKrupp. If we are not prepared to take decisive action against the natural resource speculators, they will become a serious threat to the entire steel industry and the global economy. We cannot allow that to happen.