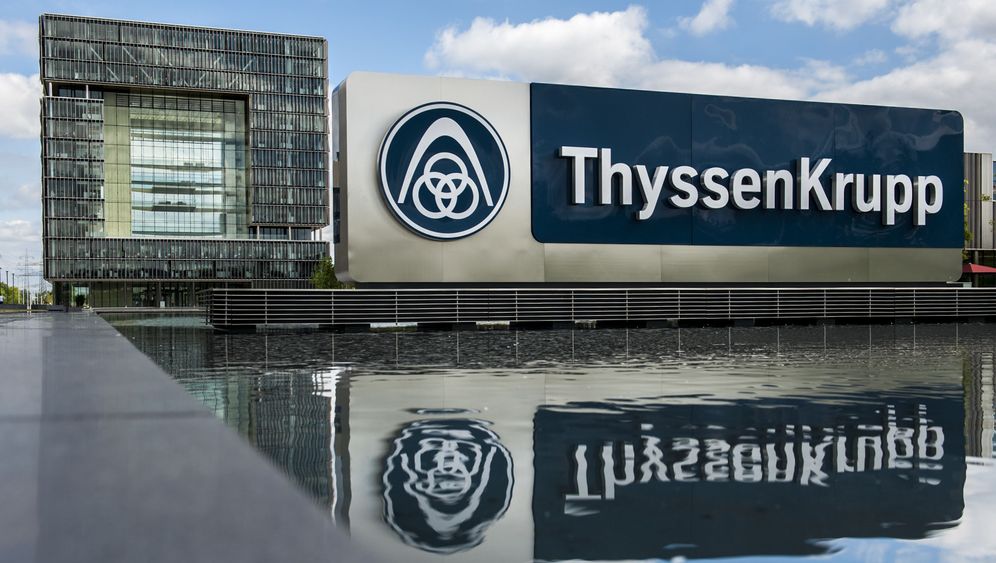 Photo Gallery: The Transformation of ThyssenKrupp

Heinrich Hiesinger, 52, has been CEO of the German steel manufacturer ThyssenKrupp for over a year. By now, one would think that his fellow executives would have figured out how the engineer and former Siemens board member ticks. But he still manages to surprise and sometimes even shock them again and again.

Take last Thursday, for example, when around 250 ThyssenKrupp executives met at company headquarters in the western German city of Essen. The executive board wanted to discuss with them how the company should best weather its current crisis and where its future lies.

At the meeting, Hiesinger projected a chart on the wall displaying the words "30 percent," which represents his vision for how much of the company's business should remain in producing steel -- the product for which the name ThyssenKrupp has stood for decades. Hiesinger wants to transform ThyssenKrupp into a technology company, with the majority of its activity in other areas: elevators, refineries, ships, machinery and parts for the automotive industry. "In the future, we will work less and think more," Hiesinger told the assembled executives.

On a rational level, many of those executives can understand that the change Hiesinger has announced is necessary for the company's survival. But, on an emotional level, it's harder to accept.

ThyssenKrupp needs to get out of steel production, at least partially, and it needs to do so fast. Last year, this business area generated €1.8 billion ($2.3 billion) in losses, which accounts for a large portion of the roughly €6 billion in debts the company has piled up.

Ekkehard Schulz, Heisinger's predecessor as CEO, built two new steel mills, one in Brazil and one the US, in an attempt to catapult ThyssenKrupp into the same league as the world's largest steel producers. It has turned out to the worst investment in the company's recent history.

Mismanagement at various levels has also more than tripled the costs of the project, originally estimated at €3 billion. Hiesinger has been left with no choice but to sell the two plants at a loss.

Initial bids for the steel mills have ranged between €3 billion and €5 billion, but it will take months before these deals go through. An additional complication lies in the fact that the potential buyers are each interested in purchasing only one of the two facilities. Since the two steel mills were designed to work in tandem and supply each other, potential buyers will first need to agree on how they want to divvy up this labor.

The sale of ThyssenKrupp's stainless steel division to Outokumpu, a Finnish competitor, has also proved more complicated than expected. The two companies closed the deal in January, but ThyssenKrupp has yet to see the agreed-upon payment of €2.7 billion owing to an antitrust complaint filed by the European Commission.

A New Way of Thinking

All this leaves Hiesinger facing one of the most difficult tasks in the German industrial landscape. Shedding a large part of the company's steel business is no simple process in and of itself. At the same time, ThyssenKrupp doesn't have sufficient funds to buy up new companies and expand its business into areas other than steel.

There's a clear cause behind these problems: ThyssenKrupp, a corporation worth billions and listed on Germany's blue chip DAX exchange, has been run as if it were a mid-sized family company. Important decisions used to be made by just three men conferring among themselves: 99-year-old Berthold Beitz, who represents the Krupp Foundation, which holds more than a quarter of the company's stock; 69-year-old Gerhard Cromme, who heads ThyssenKrupp's supervisory board; and the 71-year-old Schulz, who held the position of CEO until 2011.

Theirs was a system that ran on wheeling and dealing rather than transparency and clear rules. As long as the Krupp Foundation received its dividends, all seemed well. But, over the course of years, small problems that were left to fester have developed into a crisis that now threatens the company's very existence.

After taking up his post as CEO in Essen, Hiesinger realized that the company lacked some of the basic things it would need to efficiently operate as a technology company. There was no standardized accounting system or integrated controlling. And the company's main area of business, steel production, was run in such a way that the blast furnaces were kept operating day and night, regardless of whether they were making or losing money by doing so.

This February, for example, supply problems arose with the coking coal used in the company's steelworks. Germany was going through a particularly cold spell, and the coal froze in the freight trains cars used to transport it and couldn't be unloaded.

Under such circumstances, standard procedure at ThyssenKrupp used to be a supply of wood pellets the company kept as back-up fuel. These pellets are so expensive, though, that using them would have caused the company's quarterly earnings to plunge.

Using the pellets would have represented a technical-minded solution to the problem. But Hiesinger, the newly minted CEO, took a different approach: He had the furnaces shut down during the cold snap. Though an elaborate and costly process, it was still considerably cheaper than pushing through on pellets. This is the business-minded approach to running a steel production company -- and the approach that Hiesinger wants to apply to all the company's areas of activity.

Until Hiesinger took over, ThyssenKrupp didn't have a system for comparing each of its business areas with competitors in the same field. If comparisons occurred at all, one manager recalls, it was only among ThyssenKrupp's own divisions. The head of steel production, for example, would compare his division's profit margins against those of the company's shipbuilders, equipment manufacturers or elevator makers.

In such comparisons, ThyssenKrupp's elevator makers regularly emerged as the uncrowned champion. Its 10 percent profit margins left those of the company's other divisions far behind.

When Hiesinger introduced direct comparisons with other companies, a very different picture emerged: ThyssenKrupp's elevator construction business actually lagged far behind that of competitors, such as Kone, Schindler and Otis.

Another aspect of ThyssenKrupp's business that was conducted in a manner unfitting for a DAX-listed company was its selection of personnel. For years, this was done in a decidedly top-down fashion. In 2005, for example, the company sent Hans-Ulrich Lindenberg, an executive with long standing at ThyssenKrupp, to Brazil to oversee construction of the steel mill there, a multi-billion-euro project.

Lindenberg was selected almost single-handedly by the head of the steel division at the time. Internal company documents show that Lindenberg was considered "behind the times" even before that. Under his stewardship, the project in Brazil has run into one mishap after another.

These days, it seems highly unlikely that an executive like Lindenberg would receive such an important posting. Hiesinger has changed the selection process for such positions, requiring that several internal and external candidates be interviewed by a minimum of two board members, who then present their preference to the assembled executive board.

This process also offers Hiesinger an additional benefit: It brings external candidates into executive positions more often and, with their help, Hiesinger can carry out his changes more quickly.

In another major shift, ThyssenKrupp's executive board reached a decision last week to merge the remainder of the company's shipbuilding division with the division that handles equipment manufacturing. If the sales of the two steel mills in Brazil and the US as well as that of the stainless steel division go through, the company will have pared down from an original eight business areas to just five (see graphic). What's more, all of this will have happened with the approval of the works councils representing ThyssenKrupp employees, who recognize the need for serious change.

Hiesinger is not interested in pointing fingers over who is responsible for the company's sometimes lamentable state of affairs. "I only look ahead," he says.

And, indeed, what else can he say? Cromme and Beitz made Schulz, Hiesinger's predecessor, the scapegoat for the current situation and forced him out, while they themselves are considered untouchable.

Beitz, for one, is a living legend, an industrialist who saved several hundred Jews during World War II by employing them in his factory. He has also kept Krupp from collapse more than once, and his Krupp Foundation supports the arts and various social projects. Beitz fills the role of the good capitalist.

Who, then, would criticize the fact that Beitz is standing in the way of a capital increase? Such an increase would provide ThyssenKrupp with urgently needed funds -- but also decrease the Krupp Foundation's share. In other words, there will be no capital increase.

Meanwhile, Cromme, who chairs the supervisory board of both ThyssenKrupp and Siemens, has always been able to find someone to pin the blame on whenever problems arise. At Siemens, it has been Heinrich von Pierer and Klaus Kleinfeld; at ThyssenKrupp, it was Schulz.

But why didn't Cromme make sure ThyssenKrupp had an up-to-date system of controlling, a profession method for selecting personnel and efficient management of all its divisions? Indeed, all of these responsibilities traditionally belong to the chair of the supervisory board.

In any case, by bringing in Hiesinger, Cromme has hired a CEO whose experience at Siemens has taught him how to run a technology company. Hiesinger wants to make ThyssenKrupp "smaller but better." He's well aware that this process will take several years, and he can hardly expect to not meet with any resistance.

There are certainly still executives at ThyssenKrupp who hope Hiesinger won't change all that much. "He still learning this, too," they say, as they discuss a Plan B in case the project of establishing new business areas doesn't work out as planned.

For example, the company's remaining steel business could merge with another European competitor, such as Salzgitter AG, the major steel producer based in the central German city of Salzgitter. That would once again make ThyssenKrupp what it has been for nearly two centuries: primarily a steel company.

If that happens, then Hiesinger's chart -- the one assigning just 30 percent of the company's total activity to its traditional steel business area -- would turn out to be just one blip in a period of tumultuous change. 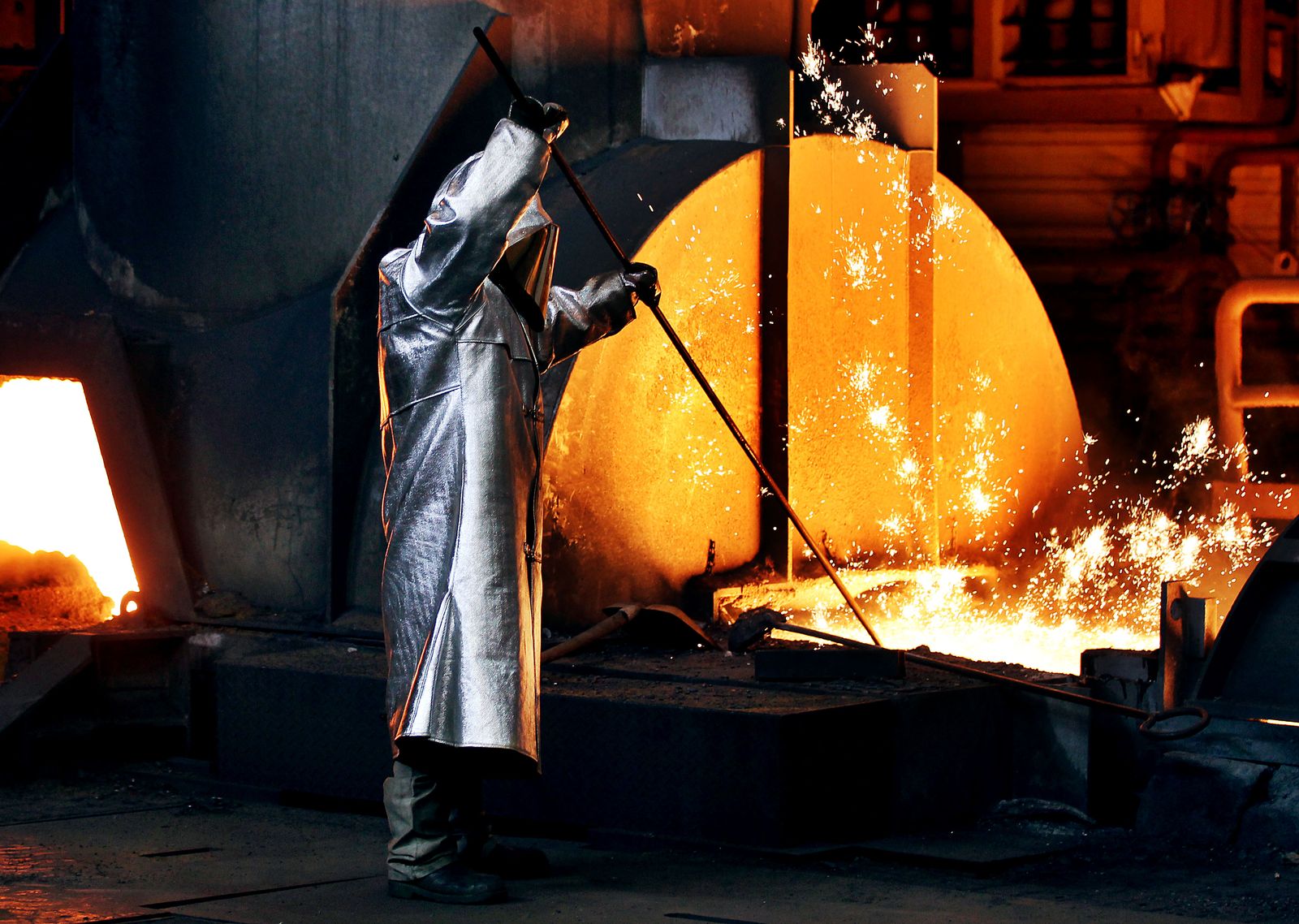 In mid-October, CEO Heinrich Hiesinger announced that the company would reorganize, and that steel would eventually only account for 30 percent of the company's activities.