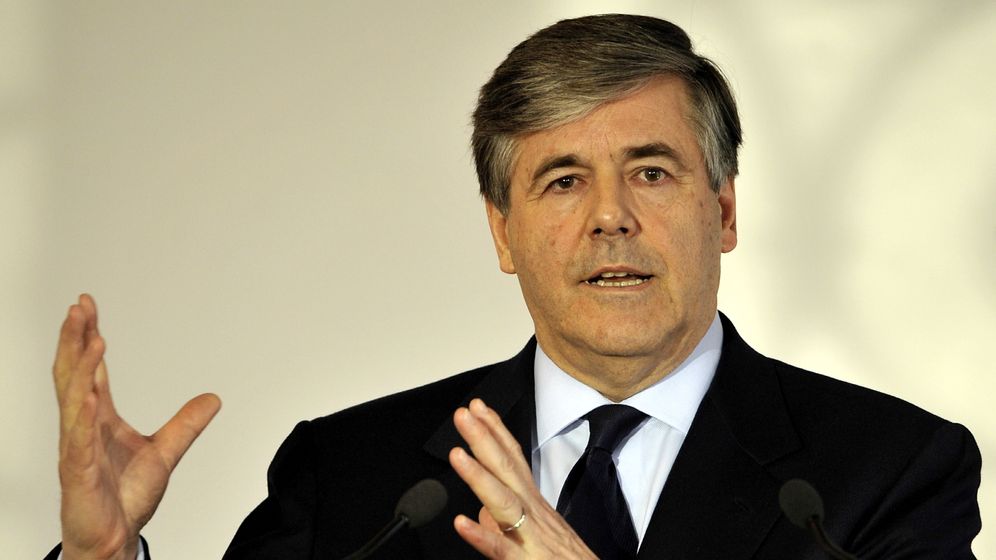 Josef Ackermann, the CEO of Deutsche Bank, has given the all-clear signal many times in the past. He has repeatedly said that the worst was over, only to see the financial crisis strengthen its grip on the world economy.

Last week, however, Ackermann was singing a completely different tune. Although many indicators are once again pointing skyward, he said at a Berlin summit on the economy, Chancellor Angela Merkel, the assembled cabinet ministers, corporate CEOs and union leaders should not to be deluded. He warned emphatically that the financial situation could deteriorate once again. "A few time bombs" are still ticking, Ackermann told his audience, noting that the growing problems of highly leveraged small countries could lead to new tremors. And then, almost casually, Ackermann mentioned the problem child of the European financial world by name: Greece.

Ackermann isn't alone in his opinion. Practically unnoticed by the public, an issue has returned to the forefront in recent weeks -- one that was a cause for great concern at the height of the financial crisis but then, as optimism about the economy began to grow, was eventually forgotten: the fear of a national bankruptcy in the euro zone. And the question as to whether such a bankruptcy, should it come about, could destroy the common European currency.

Greece was always at the very top of the list of countries at risk. But now the danger appears to be more acute than ever.

The seismographs in the trading rooms at investment banks detected the initial tremors weeks ago. Today, when the code "Greece CDS 10Yr" appears on Bloomberg terminals, a curve at the bottom of the screen points sharply upward. It reflects the price that banks are now charging to insure 10-year Greek government bonds against default.

The price of these securities has jumped dramatically since Greek Finance Minister Giorgos Papakonstantinou announced three weeks ago that his country's budget deficit would reach 12.7 percent of gross domestic product this year, instead of the 6 percent originally forecast -- and well about the 3 percent limit foreseen by European Union rules.

A second curve is the mirror image of the first. It depicts the price of government bonds from the euro-zone country. It points sharply downward.

Greece already pays almost 2 percent more in interest on its debt than Germany. In other words, at a total debt of €270 billion ($402 billion), Greece will be paying €5 billion more in annual interest than it would if it were Germany. And, with rating agencies threatening to downgrade the country's already dismal credit rating, the situation is only likely to get worse.

The finance ministers and central bankers of the euro-zone member states are as alarmed as they are helpless. "The Greek problem," says a senior administration official in Berlin, "will be an acid test for the currency union."

No Buyers Can Be Found

Greece has already accumulated a mountain of debt that will be difficult if not impossible to pay off. The government has borrowed more than 110 percent of the country's economic output over the years, and if investors lose confidence in the bonds, a meltdown could happen as early as next year.

That's when the government borrowers in Athens will be required to refinance €25 billion worth of debt -- that is, repay what they owe using funds borrowed from the financial markets. But if no buyers can be found for its securities, Greece will have no choice but to declare insolvency -- just as Mexico, Ecuador, Russia and Argentina have done in past decades.

This puts Brussels in a predicament. European Union rules preclude the 27-member bloc from lending money to member states to plug holes in their budgets or bridge deficits.

And even if there were a way to circumvent this prohibition, the consequences could be disastrous. The lack of concern over budget discipline in countries like Spain, Italy and Ireland would spread like wildfire across the entire continent. The message would be clear: Why save, if others will eventually foot the bill?

On the other hand, if Brussels left the Greeks to their own devices, the consequences would also be dire. Confidence in the euro would be shattered, and the union would face a crucial test. What good is a common currency, many would ask, if some of the member states pay their debts while others do not?

Furthermore, there is a threat of a domino effect. If one euro member falls, speculators will test the stability of other potential bankruptcy candidates. This could destroy the currency union. Because of this systemic risk, say the economists at the Swiss bank UBS, "we believe that if a country is facing a problem with debt repayment or issuance, it will be supported.

A default of a euro-group country doesn't worry the monetary policy hawks at the Bundesbank, Germany's central bank. "So what if Greece stops paying its debts?" one of the executive board members asked at a recent banquet in Frankfurt. "The euro is strong enough to take it." The real threat, he says, is if Brussels comes to the Greeks' aid. "Then the currency union will turn into an inflation union."

But it remains to be seen whether politicians can maintain such an unbending approach. The prices for Greek government bonds plunged once in the past, until then German Finance Minister Peer Steinbrück, to the horror of the Bundesbank, publicly pledged to help the Greeks if necessary. There is much to be said for the government taking exactly the same position today.

Can Bankruptcy Be Prevented?

A national bankruptcy in Greece would have a serious impact on Germany, where many banks have invested heavily in the high-yield Greek treasury bonds -- after borrowing the money to buy the bonds from the European Central Bank (ECB) or other central banks at rates of 1-2 percent. Making money doesn't get much easier -- as long as the Greeks remain solvent.

But can a Greek bankruptcy even be prevented anymore? The answer, at least initially, depends heavily on the ECB. Will the custodian of the euro continue to accept Greek bonds as collateral for short-term liquidity assistance, or will it turn down the securities in the future? Another possibility is a compromise, under which the banks would pay additional interest when they submit Greek bonds.

The next meeting of the ECB takes place on Dec. 17. "The subject will be on the agenda," say officials in Frankfurt. Time is of the essence.

Central bankers in the euro zone are already speculating, behind closed doors, what would happen if the Greeks started printing euros without ECB approval. There is no answer to the question, and that makes central bankers from Lisbon to Dublin even more nervous than they are already.

And more mistrustful. In 2004, it was discovered, completely by accident, that Greece had only managed to qualify for entry into the currency union by massaging its budget figures. The Greeks have only complied with the Maastricht criteria once since the introduction of the euro, in 2006.

Even those figures may have been doctored. At the time, the Greeks managed to increase their official gross national product by a hefty 25 percent, partly because they included the black market and prostitution in economic output. This brought down the deficit rate -- on paper, at any rate -- to 2.9 percent.

The figures representing Greece's budget deficit are constantly being revised upward. The most recent uptick, by close to 7 percent, is a record for Europe -- and it comes in a country that was relatively unaffected by the financial crisis. This year, the Greek economy will have shrunk by only 1.2 percent, say Greek economists. Next year they expect the economy to return to grown, albeit modest.

Particularly vexing to the remaining EU countries is the fact that Greece has profited from its EU membership for decades. Year after year, net transfers from Brussels have exceeded payments moving in the opposite direction by €3 billion to €6 billion. These numbers, too, have often been suspect. At times, the land area declared for agricultural subsidies was incorrect, and sometimes approval conditions were not met.

Nevertheless, EU politicians find their hands tied. "The game is over," the chairman of the euro group, Jean-Claude Juncker, declared recently, only to turn around and assure the country of his solidarity. "I don't have the slightest suspicion that Greece could go bankrupt -- anyone speculating that this will happen is deluding himself," says Juncker.

His resolute words were directed at investment bankers in London, Frankfurt and New York. They know full well that Greece is indeed on the brink of bankruptcy, but they don't know whether the EU will, as Juncker insinuated, come to the aid of member state Greece. Juncker's message, in other words, was that those speculating on a bankruptcy could be left out in the cold.

The EU has now begun a tougher approach to Greece. Three weeks ago, the government in Athens received a rebuke from Brussels, followed by another one last week. So far, however, the Greek government has shown little inclination to take any significant steps. It does intend to reduce the deficit, but only to 9.1 percent next year. This is far too little for many European foreign ministers. As the new Greek finance minister, Giorgos Papakonstantinou, recently announced, the country will need at least four years to get its deficit under control "without jeopardizing the economic recovery."

But by then the government deficit will have reached about €400 billion, or about 150 percent of GDP. Servicing that amount of debt, even at current interest rates of about 5 percent, will make up at least one third of government spending.

A London investment banker is betting on the continued decline of prices for Greek bonds in the short term, while simultaneously waiting for the right time to start buying the securities again. He jokes: "If someone has €1,000 in debt, he has a problem. If someone has €10 million in debt, his bank has a problem. And the bank, in this case, is Europe."