The daily life of the modern office worker is an ordeal with ever-changing trends. Sometimes workers are overstimulated to the point of burnout. At others they are understimulated to the point of boredom. Bookshelves are crowded with literature on employee psychopathology. But one phenomenon is often overlooked when people research the daily office life that takes place between the meetings and the water cooler: toxic workers who contaminate the workplace and make things a nightmare.

German psychologist Heidrun Schüler-Lubienetzki has now come up with a name for these types of people: "toxifiers." For several years now, Schüler-Lubienetzki and her husband have been coaching office workers in a number of companies -- employees ranging from average income workers right up to powerful executives. Soon the couple began noticing similar problems among their clients. Increasingly, similar types of people were being portrayed in their client's stories; a type of person who utilizes all means in order to advance his or her career.

Schüler-Lubienetzki and her husband noticed a vast spread of this phenomenon, prompting them to publish a German-language book this year titled, "Difficult People in the Workplace."

Based on her research, the psychologist assumes that five to 10 percent of all employees have a toxic nature. Women and men can be affected to the same degree. And anyone can turn into a victim -- the colleague walking past in the hallway, the person in the meeting, even the boss.

The trouble with toxifiers is that they are difficult to detect. Often, toxifiers are even popular amongst colleagues, perceived as friendly and amiable. It's only after a while that co-workers begin to notice that the toxifier is responsible for bullying an entire workplace. But it is possible to see signs.

"If a person starts to polarize -- either by being extremely despised or being very loved by others -- you could be dealing with a toxifier," the authors say. Likewise, toxifiers can also often be unpredictable. One moment they can be charming and courteous, and the next they can swiftly switch into a mode of ruthless and inconsiderate behavior.

Often, they are sensitive people who are masters at the art of sniffing out the atmosphere around a team of co-workers and exploiting it. Every action -- whether a performance review with a supervisor or a heart-to-heart talk with a co-worker -- serves only one purpose: to execute both control and power. Toxifiers gather information in very calculating ways only to later ruthlessly exploit those insights. They deliberately bully and psychologically torture their colleagues. Indeed, the act of consciously harming others is part of the standard repertoire of the toxifier.

Surprisingly, the scheming colleague often remains undetected. Lubienetzki explains that toxifiers act in extremely skillful ways, often even establishing friendships with their victims. If they regard their supervisor as weakened, they often seek to gain control in the office through a kind of hostile takeover.

So what character traits can be found in a toxifier? He or she is not your occasional perpetrator who takes advantage of a situation only when opportunity knocks. Toxifiers act in premeditated, categorical ways with the sole goal of obtaining personal power and reaping its rewards: status, recognition, money and sometimes even sexual relations.

"Toxifiers are drawn to power like a moth to a flame," Schüler-Lubienetzki says. This is what makes this type of person so successful and dangerous. Whenever arguments occur, the toxifier thrives. The subject matter of the dispute is unimportant because it is only the means to an end. Toxifiers enjoy it when conflicts escalate and they do not shy away from publicly humiliating their critics. Schüler-Lubienetzki describes a case in which a top manager threw his colleague's mobile phone into the trash can because he got annoyed by the ringing. In truth, though, the episode had to do with power and submission.

Poor leadership provides the ideal breeding ground for toxifiers. If a supervisor shies away from conflict, it creates an open field in which the perpetrator can operate in scrupulous ways. It would be more worthwhile for managers to take decisive measures against the employee -- right up to firing them rather than allowing them to create a toxic work climate. In Germany alone, the book's authors estimate, toxic employees create €10 billion ($11 billion) in damage each year.

Schüler-Lubienetzki says that some fields are literally suffering from epidemics of toxifiers in the workplace. They include the political sector, the art market, financial markets and the media. In all of these areas, the authors conclude, "toxic skills are nearly essential for survival." 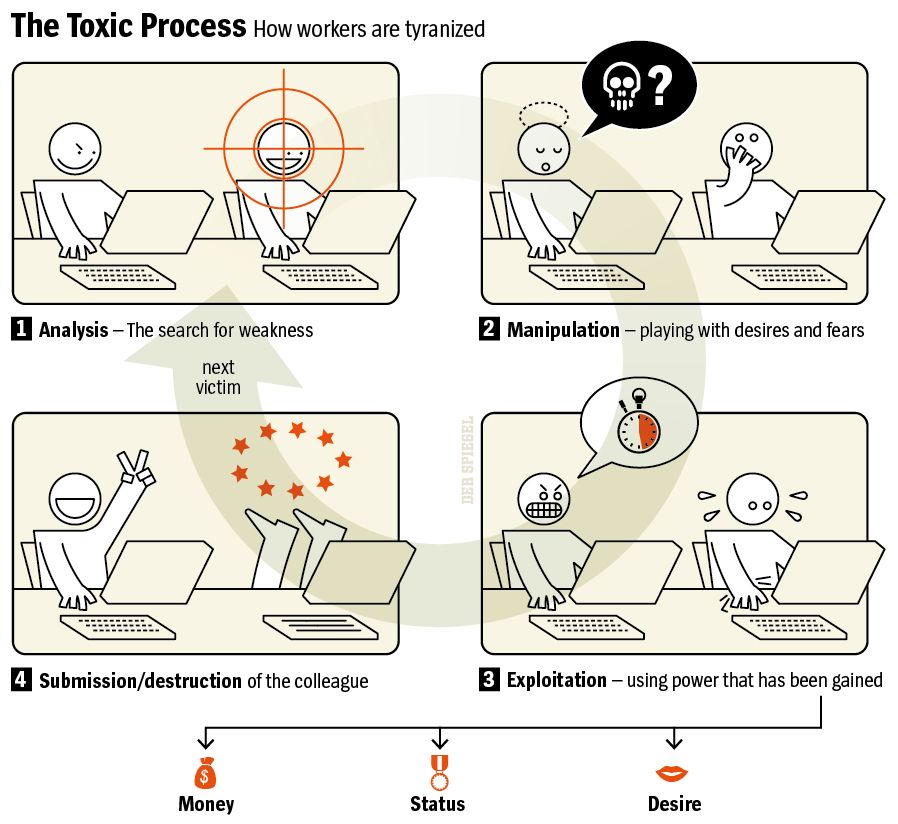