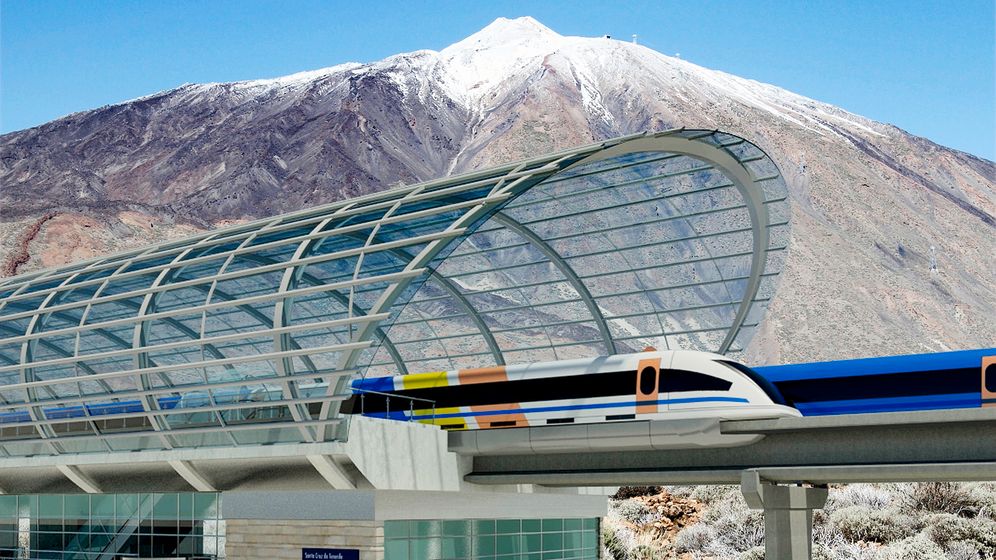 Ricardo Melchior could sing the praises of the magnificent beaches that bring five million tourists a year to his island. He could also praise the untouched nature in the national park around Mount Teide, an active volcano that once inspired the German naturalist Alexander von Humboldt. But the president of the Canary Island of Tenerife, who once studied engineering in the western German city of Aachen, really gets excited when it comes to what he sees as the transportation technology of the future.

Ironically the Transrapid, a high-speed monorail train dreamed up by German inventors more than 40 years ago, could experience a comeback on the Spanish vacation island off the coast of northern Africa. If Melchior has his way, work could begin next year on a planned 120-kilometer (75-mile) route that would connect the island capital Santa Cruz in the north with Costa Adeje in the south and Los Realejos in the northwest. The train, which uses magnetic levitation (maglev) technology, could then speed around the island at about 270 kilometers per hour (169 mph) -- without noise and partially powered by solar energy.

The Spanish politician is well aware that in Germany the Transrapid is seen as the Loch Ness monster of the German economy: often sighted by the media but never really materializing. It was supposed to be levitating through the Saudi Arabian desert by now and carrying pilgrims the 800 kilometers (500 miles) from Tehran to the holy Islamic city Mashhad in Iran. It was supposed to bring travelers from Hamburg to Berlin and from Munich's main train station to the city's airport. But with the exception of a short stretch near Shanghai, the Transrapid has consistently remained a ghost train.

In Tenerife, on the other hand, the maglev train is seen as a transportation system with a future, at least according to what Melchior was telling European Union transportation experts in Brussels last week. The Transrapid could be particularly advantageous on Tenerife's mountainous terrain, says Melchior, because it overcomes altitude differences more easily than conventional trains. While a third of the route for a normal train would have to consist of tunnels drilled through lava rock and brittle coarse gravel, a Transrapid line could be largely tunnel-free.

For this reason, the maglev train would cost only half as much as a conventional rail line, and it would be more appealing to tourists, a project study says. As the study's authors point out, a longer train ride through tunnels "wouldn't be much of an attraction."

The only problem is that the enthusiasm over the Transrapid is greater among the potential buyers than in Germany, where the train would be manufactured. While the German government is making every effort to support Operation Tenerife, the industry has lost interest in the Transrapid. After the Munich airport project was canceled in 2008, it now prefers to focus on the conventional railroad business.

German Transportation Minister Peter Ramsauer is furious. The German government invested €1.5 billion ($2.18 billion) in the development and testing of the future-oriented technology, the politician from the Christian Social Union, the Bavarian sister party to Chancellor Angela Merkel's Christian Democrats, says heatedly. "Now it's up to the industry to market the technology," Ramsauer says. If the industry doesn't play along, says Ramsauer, the same thing could happen with the Transrapid that happened with computers and MP3 players. They too were invented in Germany, while the profits were eventually made elsewhere.

Ramsauer's frustrations were recently reinforced at a joint PR appearance with representatives of the German Transrapid industry in faraway Brazil, where a high-speed rail route has been put out for tender. His company "invented and developed" the maglev train "once upon a time," said Hans Christoph Atzpodien, a senior executive with Essen-based steelmaker ThyssenKrupp. But, he added, the train is currently "not a major interest" for the company.

The second Transrapid manufacturer, Siemens, is also showing little interest. Although there are "a few indications of possible routes inside and outside Europe," says Hans-Jörg Grundmann, head of the company's mobility division, "we do not see any immediate, realistic marketing prospects at this time."

Such lethargy infuriates Ramsauer, who already sees himself as a "Captain Future" of transportation policy. At his behest, Transportation Ministry deputy Rainer Bomba recently took Siemens executive board member Siegfried Russwurm to task, suggesting that the company could show a little more enthusiasm for the Tenerife project.

Privately, Bomba vented his displeasure over manufacturers dragging their feet, saying sarcastically, "The customer is threatening to make an order."

That could, in fact, happen soon. Melchior says that he already has funding commitments for a portion of the estimated €3 billion maglev route. He intends to tap into Europe's subsidy coffers and the wallets of private investors for the rest.

Melchior is also counting on the support of Chancellor Merkel. In a letter to the German leader, the island's president directed her attention to Tenerife's problems. He asked Merkel, who likes to vacation on the neighboring island of Gomera, to put in a good word with Siemens and ThyssenKrupp, so that his island railway could be built.