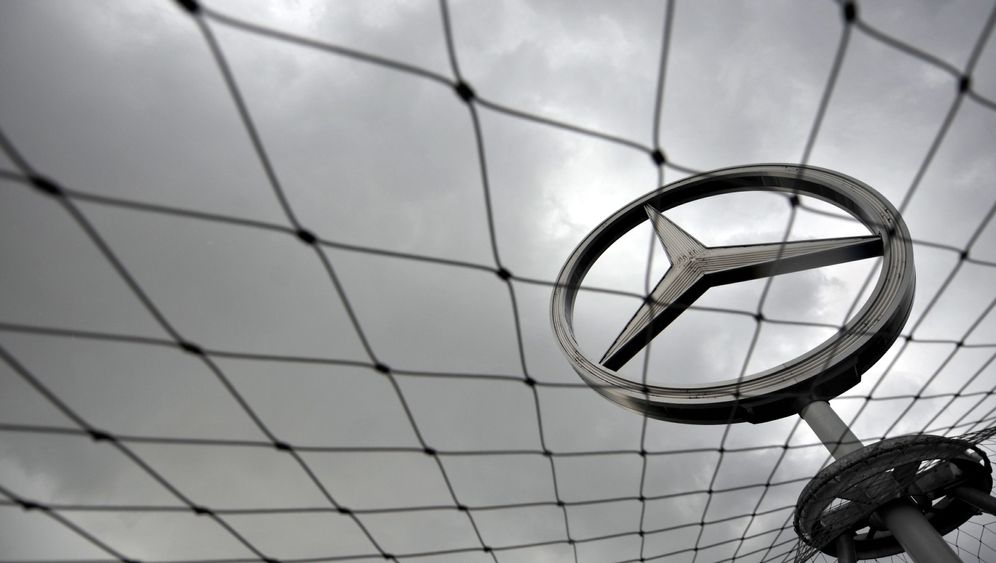 For years, Ernst Lieb was seen as the prototype of a Daimler manager. Lieb, referred to simply as Ernst at the Stuttgart headquarters, worked for the carmaker for 36 years, most recently as the head of its important US operations. In addition to knowing his way around expensive cars, Lieb is a connoisseur of good food and wine. He cultivated the persona of a "Mister Mercedes" and lived in a company-owned mansion in New Jersey. Many of New York's wealthy and important people were invited to his parties.

Now Lieb is gone, after having been dismissed in October. He is still considered the prototypical manager, but of the type Daimler no longer wants to see in its ranks.

The former Mercedes executive was simply charging too many items to his employer's tab, including a home theater for $89,000 (€68,000), a home gym for about $22,000, a washing machine, a dryer and a bed, a built-in barbecue system, his membership in a country club, and much more.

There was a time when Daimler would have taken care of the matter on the quiet. It would have issued a brief press release, stating that the head of its US operations was leaving the company "on amicable terms," and that would have been that. But now Daimler is in litigation with its former executive in a Stuttgart labor court, and the details are being discussed openly, including the charge that Lieb had his employer reimburse him for several thousand dollars to cover the electricity costs for an elaborate Christmas lighting display at the New Jersey mansion.

Under Strict US Supervision

The company must now face questions as to why it paid for such perks for years, only now to sue its former executive in a labor court. As it turns out, lawyers for Mercedes-Benz have become a permanent fixture in the court. According to an internal list, the company has dismissed 39 managers, 30 of them without notice, since August 2010.

But the company is not to blame for such crass treatment of its top managers. Daimler is operating under the strict supervision of the US Securities and Exchange Commission (SEC) and the US Department of Justice.

The board of directors, under CEO Dieter Zetsche, now has only limited powers. And it serves as an example of how German companies can come under the control of American regulatory agencies.

For years, the SEC and the Justice Department investigated corruption allegations against Daimler involving dubious payments in 22 countries. Under a settlement the carmaker reached with the Americans in April 2010, Daimler was to pay a fine of $185 million and the investigation was to be suspended -- under the condition that Daimler prevent its employees from engaging in corrupt business practices in the future.

Under the arrangement, a monitor was appointed to ensure that Daimler remained in compliance with the agreement. This monitor has almost as much power as a district attorney. All of the managers must cooperate with him and, upon request, turn over telephone lists, email communications and files. Although the monitor cannot arrest anyone, he can block promotions and demand dismissals.

Former FBI Director Louis Freeh took on the job at Daimler. He and a permanent staff of 20 employees have been investigating the company for more than a year now, and he has up to 60 additional experts flown in from the United States for individual audits.

Freeh's appointment lasts until March 31, 2013. If he is unable to certify by then that the company has made effective arrangements to combat corruption and abuse, Daimler could face further legal action and billions in fines. In other words, Daimler is merely on parole.

Siemens is in a similar boat. The German electronics giant has already paid $800 million for the SEC to end its corruption investigation. Siemens is also under SEC supervision, but it managed to convince US officials to accept Theo Waigel, a former German finance minister, as its monitor. Since then, things have been quieter at Siemens headquarters in Munich than at Daimler headquarters in Stuttgart.

The two giants are victims of their own corporate policies. Many years ago, they joined a number of other German companies to become listed on the New York Stock Exchange (NYSE), hoping that share value would increase more quickly if they were listed in New York. But companies that are listed on US exchanges are also subject to supervision by the SEC -- and the SEC can investigate them, even when, for example, a German company is suspected of having bribed politicians in Africa.

It isn't easy for companies to escape the stranglehold of the SEC. Even when they withdraw from the NYSE, as E.on, Deutsche Telekom and Allianz have done, they remain subject to US laws for another five years. Daimler, which also withdrew from the NYSE, still remains under US observation. Senior executives at Daimler are beginning to see this as a new form of economic warfare, and they accuse the US authorities of using their extensive investigations to make it more difficult for German companies to do business.

When former FBI Director Freeh arrived on the scene, a climate of fear took hold at Daimler. The executive rumor mill was full of stories about colleagues who had been fired for having invited good customers to a Formula One race or made fun of whistleblowers. "It's as if we had the Stasi" -- the notoriously effective former East German secret police -- "in the building," says a Mercedes-Benz manager.

Marketing experts complain that their business is suffering because hardly anyone knows what practices are permitted anymore. A bus salesman, for instance, was investigated for having given a customer a discount in addition to a credit for future parts purchases worth several thousand euros. Without these concessions, the lucrative deal would have been impossible. Employees in the compliance department, whose job is to ensure observance of the law, suspected corruption.

In a secret document, Daimler CEO Zetsche has added up all the contracts the truck division alone has lost because it can no longer sell products to certain highly corrupt countries. The total: €52.8 million in lost sales in the last 12 months. The company has also had to pay damages when it could no longer honor existing delivery contracts.

Christine Hohmann-Dennhardt deals with such complaints. She once served as the justice and science minister in the western German state of Hesse, and as a judge on the Federal Constitutional Court, before becoming a member of the Daimler board in February of this year.

Reaching Back into the Past

Hohmann-Dennhardt is now responsible for "Integrity and Legal Affairs" at Daimler. On the one hand, this puts her on the same side as Freeh, because her goal is to develop a system that reduces corruption and excesses as much as possible. On the other hand, she is an adversary to the US monitor. Hohmann-Dennhardt's job is also to ensure that the company is not crippled by overly thorough investigations, and that German employees' rights are protected and data privacy provisions are observed during all investigations.

Indeed, internal investigators had been in the habit of questioning potential witnesses when looking into possible corruption, meaning that rumors about a specific manager would rapidly spread. Now, suspects are to be questioned first and officially rehabilitated as soon as suspicions are proven to be untrue.

Former FBI Director Freeh already accused Hohmann-Dennhardt of misusing privacy protection laws to slow down the investigations. The German jurist coolly responded that the compliance with the law Freeh is demanding also happens to apply to German laws.

Conflicts crop up regularly, because the monitor is so demanding. Freeh insists on being briefed on almost all cases in which employees are being investigated. He wants to see the agenda for every board meeting, and not just when the subject of compliance is under discussion. He even demands to be shown the files on the European Union's antitrust investigation of Daimler's truck division.

Hohmann-Dennhardt is convinced that all of this has nothing to do with his actual mandate. The former Constitutional Court judge has explained to Freeh why Mercedes-Benz cannot comply with all of his wishes.

This is not without risk. The former FBI director writes an annual report to the SEC. The first report, for 2010, did not paint Daimler in a favorable light. "Management has no clear idea of how compliance should work," Freeh reported to the SEC.

The US monitor writes that Daimler management has made considerable progress, but that the company still has a long way to go. For this reason, Freeh denied the company the anticipated full certification, that is, the recognition that its anti-corruption program satisfies the SEC's requirements.

The US monitor cites four points of criticism. First, says Freeh, the internal investigations of suspicious cases are too slow and are conducted by too few employees. Second, Daimler is not adequately investigating its business partners in "high-risk countries," which are seen as extremely corrupt. Third, Daimler is not checking up on the methods to fight corruption to see if they are actually working. And fourth, the company has not consistently prevented "unethical behavior of executives."

For Freeh, the case of Daimler's head of US operations, Lieb, is a prime example of the self-service mentality that remains so pervasive among the executives Daimler sends abroad. His suspicion is not particularly unfounded, as the case of Wolfgang Schrempp, the brother of former DaimlerChrysler CEO Jürgen Schrempp, shows.

Until 2010, Wolfgang Schrempp was in charge of company operations in Australia and the Pacific region. When Schrempp moved to Australia for the job, he had the company mansion renovated for the equivalent of €274,000. He billed Daimler €34,000 for curtains, €13,000 for kitchen appliances and €8,200 for a wine rack. He also claimed €86,000 in reimbursable expenses for garden upkeep and pool maintenance.

Schrempp also collected a monthly rent allowance of €5,800, even though he was living rent-free in a house owned by the company. An internal audit uncovered the inconsistencies. Schrempp said he assumed that the company knew he was living in a company-owned house, and that this circumstance was already reflected in his pay and benefit package.

No legal action was taken against Schrempp, partly because Freeh was not yet involved when his severance agreement was concluded. Instead, Schrempp was able to go into early retirement as of Dec. 31, 2010, and he received €121,000 from his former employer.

As a result, Freeh now wants to review all cases of executives who were already the subject of earlier investigations. It would be a profitable business for Freeh, whose private consulting firm bills daily rates of several thousand euros for his employees -- with Daimler paying the tab.

But such a costly and extensive investigation could cripple Mercedes-Benz in some areas for months. Many senior managers would be primarily involved in answering the US investigators' questions.

Board member Hohmann-Dennhardt convinced Freeh that random checks would be sufficient. She argued that it was the company, after all, that had uncovered wrongdoing in the Lieb case, and that this demonstrates that the control mechanisms do in fact work.

Lieb, the dismissed head of US operations, is not giving up without a fight. His attorney, labor law expert Stefan Nägele, has already won wrongful termination suits for many Daimler managers who were let go.

Nägele also thinks that the Lieb case is promising. Upon closer inspection, he says, it isn't nearly as clear-cut as it seemed at first. It wasn't Lieb, but his predecessor, who had ordered the renovations at the New Jersey mansion, says Nägele. And, he adds, anyone who knows Herr Lieb also knows that a home gym wouldn't be a priority for him. "He would have preferred a gourmet kitchen."