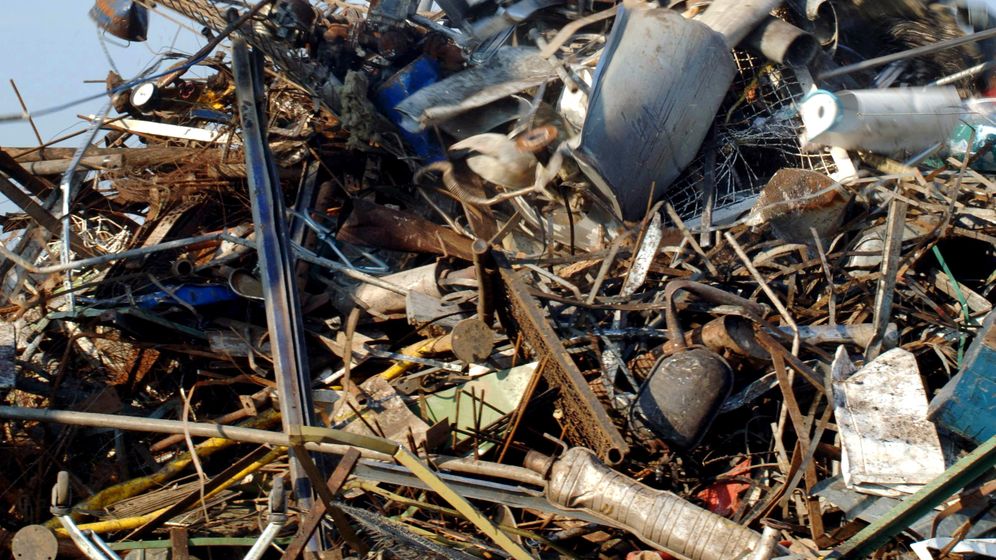 Photo Gallery: Worth Its Weight in Palladium

Thierry Van Kerckhoven has an eye for hidden value. The Belgian can look at a pile of shredded scrap metal from electronic devices and recognize what it is made of. Not only that, he can tell how much it's worth.

Kerckhoven works as a buyer of such waste in the world's largest recycling facility for complex precious metals in Hoboken, a section of the Belgian city of Antwerp. The Umicore Group owns the facility, where deliveries are stored in individual concrete bays. Kerckhoven removes his sunglasses and surveys his treasures.

The powdery and shiny material in Box 2051 on the far left, Kerckhoven explains, used to be printed circuit boards and monitors. The copper in the mixture produces the brown color and the glass makes it shimmer. Kerckhoven can detect the remnants of SIM cards in a pile of colorful bits of plastic in the next bay. He pulls out a handful and points to the word "Vivo," a Brazilian mobile communications company.

"Probably excess production," he says, explaining that this is why the material ended up in the landfill. Useless for Vivo, it becomes a valuable resource for Umicore. There are about 100 grams of gold, valued at about €3,400 ($5,000), in each ton of waste in this box. By comparison, a ton of ore from a gold mine often contains no more than 5 grams of the precious metal. When it comes to yield, the recycling plant in Hoboken far outperforms any mine in the world.

But the 16 other metals that Umicore extracts at this facility are at least as sought after as gold. They include gallium, a key ingredient in solar cells, and rhodium, which is used in catalytic converters, and of which Umicore produces four tons a year, or one-fifth of the global demand.

Such raw materials are scarce and coveted, and have become more and more expensive over the years. The industry, warning of dangerous bottlenecks, is searching for new sources. One solution could come from the garbage can. What was simply waste in the past is suddenly being upgraded to a valuable resource.

If electronic waste were systematically recycled, companies could at least partially cover their demand for important metals on their own in the future. Then manufacturing countries would no longer be as dependent on producing countries like Australia, Brazil and China, the key suppliers of the metals known as rare earths. These sought-after special metals, with names like dysprosium and neodymium, are essential in the manufacture of high-tech products.

Until now, however, the potential for the extraction of rare earths from recycled materials was largely unexploited. While Germany achieves recycling rates upwards of 80 percent for glass and paper, the majority of electronic devices are lost as sources of raw materials. Electric shavers, hair dryers and toasters gather dust in cabinets and drawers or, as is more often the case, are simply thrown in the general trash and end up in waste incinerators.

There, veritable treasures literally go up in smoke. For example, for every ton of mobile phones, or about 10,000 units, that are disposed of in an incinerator, 150 kilograms of copper, 5 kilograms of silver and about 100 grams of palladium are lost.

A new study by the United Nations Environment Programme (UNEP) arrives at staggering results. One conclusion, for example, is that the recycling rates for 32 of 37 special metals are close to zero. The unused potential of recycling such materials is "enormous," say the authors. The study concludes that the industrialized countries should radically change their wasteful use of resources, particularly as the volume of scrap from electronic equipment is growing rapidly from year to year.

New generations of smartphones and laptops are introduced to the marketplace -- and old models scrapped -- within shorter and shorter cycles. At the same time, the total demand for valuable metals is growing immensely. To satisfy this demand from mines alone would be asking too much of nature, warns Armin Reller, a chemistry professor and resource specialist in the southern German city of Augsburg. "What we need is a recycling strategy," he says.

The current system, which has existed in Germany for the last six years, is clearly in need of improvement. When it was put in place, the government compelled manufacturers to develop and fund a take-back system. Since then, consumers have been able to drop off electronic equipment at Germany's roughly 1,500 community collection sites, in addition to the usual bulk waste and hazardous materials. Workers at the facilities sort the waste into five groups.

Once a container is full, a message is sent to the EAR foundation in the northern Bavarian city of Fürth, which organizes the collection of used appliances and their further processing. All manufacturers that sell electrical and electronic equipment in Germany are required to register with the EAR. Approximately 8,000 businesses are currently registered.

Heading for the Shredder

The companies hire private-sector environmental service providers to pick up and dispose of the waste, a process that occurred more than 90,000 times last year. The amount of material a manufacturer sells in a given category determines when and how often its waste is picked up.

The program is costly and complex, and the results are hardly satisfactory. The EAR itself admits that the program is "capable of expansion." According to recent figures, only 27 percent of new devices sold end up at the collection sites. "We have a collection problem," says Hubertus Bardt, an expert on natural resources at the Cologne Institute for Economic Research. But what needs to happen to ensure that electronic waste does in fact end up in the shredder?

The German government is looking into whether a special waste container for recyclable materials could help solve the problem. It is expected to be introduced in households by 2015, as a new component in the existing system for recycling household waste, which has different color-coded bins for different classes of material such as paper, glass and plastic. The new trashcan is supposed to replace the current yellow bin, which is intended for packaging.

But what exactly should go into the new bin remains unclear. For example, should it include small electronic devices, in addition to plastic and metal? The Federal Environment Agency (UBA) is opposed to this practice, for ecological reasons, noting that there is too great a risk of hazardous materials escaping from items like batteries and printer cartridges during processing. It is also unclear who will actually have access to the new bins for valuable waste: municipal waste disposal organizations or their private competitors.

The agency is proposing another option altogether. It argues that a voucher system could offer an incentive to return old equipment. UBA President Jochen Flasbarth advocates using this type of system, at least for mobile phones. Mobile communications providers could donate free minutes as a reward. Currently, no more than one in four mobile phones is being recycled, even though the network operators pay the postage for customers to return the devices.

It would be even more productive, however, if police and customs officials could gain control over the illegal export of electronic waste. Tens of thousands of tons are lost to the materials cycle because dodgy dealers collect the material at flea markets or by digging through bulk waste and household refuse left at the curb, and then ship it overseas.

Television sets, computers and printers are shipped overseas from European ports like Hamburg and Rotterdam, mostly to African countries, including Nigeria and Ghana. There, they are often taken apart by children working with their bare hands. They burn off cable housings, for example, to extract copper wire -- breathing the toxic smoke in the process.

Exporting waste materials across international borders is banned under the Basel Convention of 1989, but few containers are inspected, and sometimes the problematic material is hidden behind rows of intact equipment. Law enforcement lacks the necessary time and personnel to conduct rigorous inspections, particularly as the ships usually spend only a few hours at the wharf.

The recycling industry sees greater promise in developing a different, yet untapped supply of resources. Old landfills contain tons of treasures from the days when the concept of recycling was still largely unknown. Stefan Gäth, a waste and resource management expert at the University of Giessen in western Germany, estimates that household garbage dumps contain enough metallic raw materials to cover the entire German demand for a year.

Gäth and his team used an auger to drill about 20 meters (66 feet) into the interior of a decommissioned landfill in Hechingen, a town in southwestern Germany. The dump was in operation from 1982 to 2004. In addition to paper, plastic and glass, they found large amounts of metal: from soup spoons to entire electric drills.

The professor suspects that abandoned landfills contain about €30 million to €50 million worth of scrap material. The only catch, at least for now, is that the costs of extracting valuable waste from the landfills are higher than the expected revenues.

We still have a long way to go from the throwaway society to the recycling economy of the 21st century. Efficient collection procedures are needed. Even more importantly, consumers need to be made aware of the fact that electronic waste can be valuable. However, even the highest collection rate is no guarantee that the recycling industry will indeed filter out all metals from the garbage. There are limits, as the Umicore facility in Hoboken demonstrates.

Buyer Thierry Van Kerckhoven is standing in front of a protective shield, watching the shredded material fall into a furnace where the temperature is 1,100 degrees Celsius (2,000 degrees Fahrenheit). The molten material is constantly making hissing and crackling noises. "Sometimes the materials react somewhat aggressively," Kerckhoven explains.

First heat is used to separate the materials, and then chemistry is used to do the more detailed processing, which he doesn't want to discuss, citing trade secrets. He does admit, however, that the coveted rare earths are not part of the yield.

It is certainly technically feasible to recover these materials, too, says Kerckhoven. But it would involve an enormous additional cost, he adds. "Rare earths are still much too cheap for that."