Donald Trump is fond of expressing simple economic doctrines in powerful terms. "Trade wars are good, and easy to win," the U.S. president has said.

But asid from the grammar, nothing about that statement is correct, and this week Trump discovered just how difficult it is, even for the biggest economy in the world, to impose its will on a competing nation. The U.S. president announced, of his own accord, that the U.S. would impose new tariffs on Chinese imports with the goal of weakening the economy of his biggest rival. As a result, China's currency began to slide, and for the first time since 2008, the yuan fell under the symbolically significant value of seven yuan per dollar.

China's central bank allowed it to happen -- offering what Trump saw as the ultimate proof that Beijing is purposely weakening its currency to make its exports more appealing to foreign buyers and thus flooding the West with low-quality goods. The fact that the Chinese retaliated by halting the purchase of U.S. agricultural products, thus hurting a key Trump consituency, may have further angered the president.

The turbulences show that nothing is simple in the trade conflict between the U.S. and China, and that both opponents are being battered. In the U.S., growth is slowing and the stock market is faltering. China is experiencing stronger headwinds than it has in almost 30 years. The country relies on high growth to keep its citizens happy, and the unrest in Hong Kong is making its leaders especially nervous.

Because the Chinese are buying fewer foreign products, the country's neighboring states are also feeling the effects of the crisis. The situation in Europe and Japan looks similarly grim. The German automotive industry, in particular, is suffering as a result of the customs dispute. "The danger of a global recession has increased dramatically," says Joachim Fels, the head economist at Pimco, the world's biggest bond investor.

The accusation of currency manipulation is intensifying the trade conflict -- a dispute that has been straining the global economy for months. For some, it is reminiscent of the 1930s, when the world's biggest economies competitively devalued their currencies and imposed tariffs on one another to protect their manufacturers and allow themselves to cheaply sell exports. It was a race to the bottom with a dark outcome: global economic crisis, mass unemployment and world war.

Although it is unlikely that history will repeat itself, the currency feud between Washington and Beijing marks the low-point of an economic battle between the world's two biggest economies.

Trump didn't create the conflict, but he has been fighting it more brutally than his predecessors. At its core, it is about which country will rule the world in the future: the U.S., with its globally dominant currency, its digitally innovative Silicon Valley and the world's biggest military? Or China, with the world's biggest currency reserves, its one-party dictatorship and 1.4 billion consumers?

The U.S. economy is still larger than China's, but China has closed the gap significantly in the past 30 years. In a few years or decades, it may have caught up completely.

Trump, otherwise so erratic, has always been steadfast in his desire to prevent the U.S. from slipping into second place -- in part as an argument for reelection. He has the support of much of the country on the issue and he is repeatedly stoking the conflict, supported by radical nationalist economic advisors like Robert Lighthizer, Peter Navarro and Larry Kudlow. Even the Democrats don't oppose him when it comes to China.

A triumph against China could ensure Trump a second term. He could sell the signing of a trade agreement before the presidential election in the fall of 2020 as proof of his successful strongman policies. "The Americans don't vote out a president who is in a kind of war," says Fels. Trump wants to force China to sign an agreement, and to make that happen, Washington is resorting to trickery. Several conditions theoretically need to be met for the U.S. Treasury Department to classify a country as a currency manipulator, allowing it to impose tariffs at will. A country needs to, first of all, generate a global current account surplus of at least 2 percent of its GDP -- which is to say, it must export far more goods and services than it imports. Secondly, it needs to weaken its currency on the currency market for an extended period. Thirdly, it must sell far more goods to the U.S. than it buys.

Two of the three criteria have not yet been fulfilled. In the past few years, China hasn't intentionally weakened the yuan. According to Gabriel Felbermayr, president of the Kiel Institute for the World Economy, Beijing has instead propped it up in order to make its currency more attractive to international investors. "Since 2010, one can no longer level the accusation of currency manipulation." He also says China no longer has a general current account surplus (goods and services).

The only criterion that is fulfilled is the trade balance surplus (but only on goods). If one calculates the imports and exports between the U.S. and China when Trump took office in January 2017, there was a deficit of $31 billion favoring the U.S. In June 2019, it was still $30 billion. Trump could sell this figure as a win, should he be so inclined. The fact that Americans can afford to spend more money on Chinese products than Chinese consumers can spend on products from the U.S. is the result of America's robust economic growth in recent years.

China's apparently endless economic boom, by contrast, is slowing down -- not only because of the trade conflict, but also because of the saturation effect: China is no longer a developing nation. "China has only a few years left to become rich before it becomes old," says Holger Achnitz, who leads the currency trade of the Citigroup in Germany.

The risks of Trump's hazardous policy are tremendous, even on a domestic level. If U.S. sellers simply add the tariffs to the sales prices, U.S. consumers will need to pay more for cars, refrigerators and machinery made in China. Barry Eichengreen, an economist at the University of California, Berkeley, argues that the tariffs "are the equivalent of a big tax increase on U.S. consumers."

Economists at Princeton University and Columbia University and at the Federal Reserve estimate that the resulting deadweight loss amounts to over $4 billion. And that was the springtime estimate. Trump has imposed additional tariffs since then. Nobel Prize-winning economist Paul Krugman calculates that an average tariff of 20 percent could lead to a decrease in purchasing power of about $100 billion per year.

The Federal Reserve has also cited Trump's trade policy as a reason for their now negative outlook for the economy. They recently lowered the key interest rate for the first time since 2008. Further steps to strengthen the economy may follow.

For Trump, that isn't enough. He has insulted the Fed, claiming that their monetary policy is responsible for a looming recession. He argued that it must further lower the interest rate -- partly to avoid a downturn before the presidential election in November 2020.

The Fed is in a bind. If it gives into the pressure from Trump, it runs the danger of losing its independence and setting off competitive devaluation. The government could also force the Fed to buy renminbi, as the Chinese currency is officially called, to make it more expensive and inflict damage on China. The Fed would then be seen as Trump's willing accomplice.

The International Monetary Fund (IMF) is also in a double bind. It regularly monitors whether countries are manipulating their currencies and thus violating the fund's rules. When it comes to China, the IMF has always said this is not the case. With his claims that China is manipulating its currency, Trump is now forcing it to take his position -- a potentially damaging step. "If the IMF supports the U.S., it will undermine its credibility," says Felbermayr. If the IMF resists, the U.S. could block important IMF committees.

"There is the danger of a currency war," says Felbemayr. But he says the IMF is being deliberately pushed off the fence by Trump. The devaluation of the renminbi, he argues, is a logical consequence of the tariffs. The economy is suffering, so the currency is dropping. "The devaluation is exactly what Trump wants: The Chinese are carrying the costs of the trade war; the U.S. is continuing to receive goods from China, but is paying less for them."

Who Will be the Winner?

Trump's trade warriors, he says, don't understand this and are only looking at the trade balance. "That is their fetish." Because of this, the U.S. might react with even more tariffs, and the renminbi might continue to weaken. The Chinese could simply print money to make their currency and their goods cheaper. After all, China's central bank answers to the country's leadership, a system of dependence that Trump would like to see in the U.S. as well.

The dollar has also increased in value against the euro and the Japanese yen because the economies there are slower than in the U.S. Now there is the danger that both currency regions might also devaluate their currencies -- the 1930s scenario. "The ECB (European Central Bank) and the Bank of Japan will further loosen their monetary policy, because growth is weak and inflation is low," says Felbermayr. Europe could then also be suspected of manipulating its currency

A global glut of money could set off chaos on the financial markets and, possibly, inflation. Nobody, though, wants that. The U.S. and China are suffering in equal measure and both even share the same interests. "Trump wants growth so that he can be reelected, China so it can maintain its social model," says Michael Spencer, Deutsche Bank's chief economist in Asia. But he says that the confrontation might continue anyway, given that both have entrenched themselves deeply in their positions.

It's unclear who has the greatest leverage. The Chinese? Theoretically they could let their currency hit bottom to provoke Trump. But practically speaking, doing so would inflict considerable harm on the Chinese people. Many companies hold large debts in dollars, and the country counts its oil imports in dollars as well. Both would become more expensive if the renminbi drops and the dollar goes up. According to Kenneth Rogoff, former chief economist at the IMF, if the trade and currency war continues, China's economic growth could shrink from the current 6.6. percent to 3 or 4 percent. The tariff conflict, he argues, is having a strong impact on the country. "The risk of a shaky landing in China is pretty high over the next year," Rogoff says.

But the Chinese can launch targeted attacks, like the recent stop to U.S. agricultural imports or the call for people to purchase Chinese Huawei goods instead of Apple products. China has also monopolized the market for rare earths. These metals are essential for the manufacture of screens, batteries, computers and smartphones and thus crucial for the U.S. tech industry.

Or does Trump have the advantage? "The U.S. rule over the global financial system and can force many countries into an anti-China coalition," says Felbermayr. However, Trump will hardly want to endanger his chances of reelection by driving the U.S. into a recession and blunting his teeth on the Fed.

Many economists believe he will relent at some point so he can portray himself to voters as a hero who forced the Chinese into a trade agreement. They argue that it doesn't need to be a thorough deal, given how deep the problems between the two nations are. Felbermayr believes that it's importance would be symbolic, and that Trump could say: "This is the best deal possible."

The world will have to hope that the damage hasn't grown too significant by the time that moment comes. 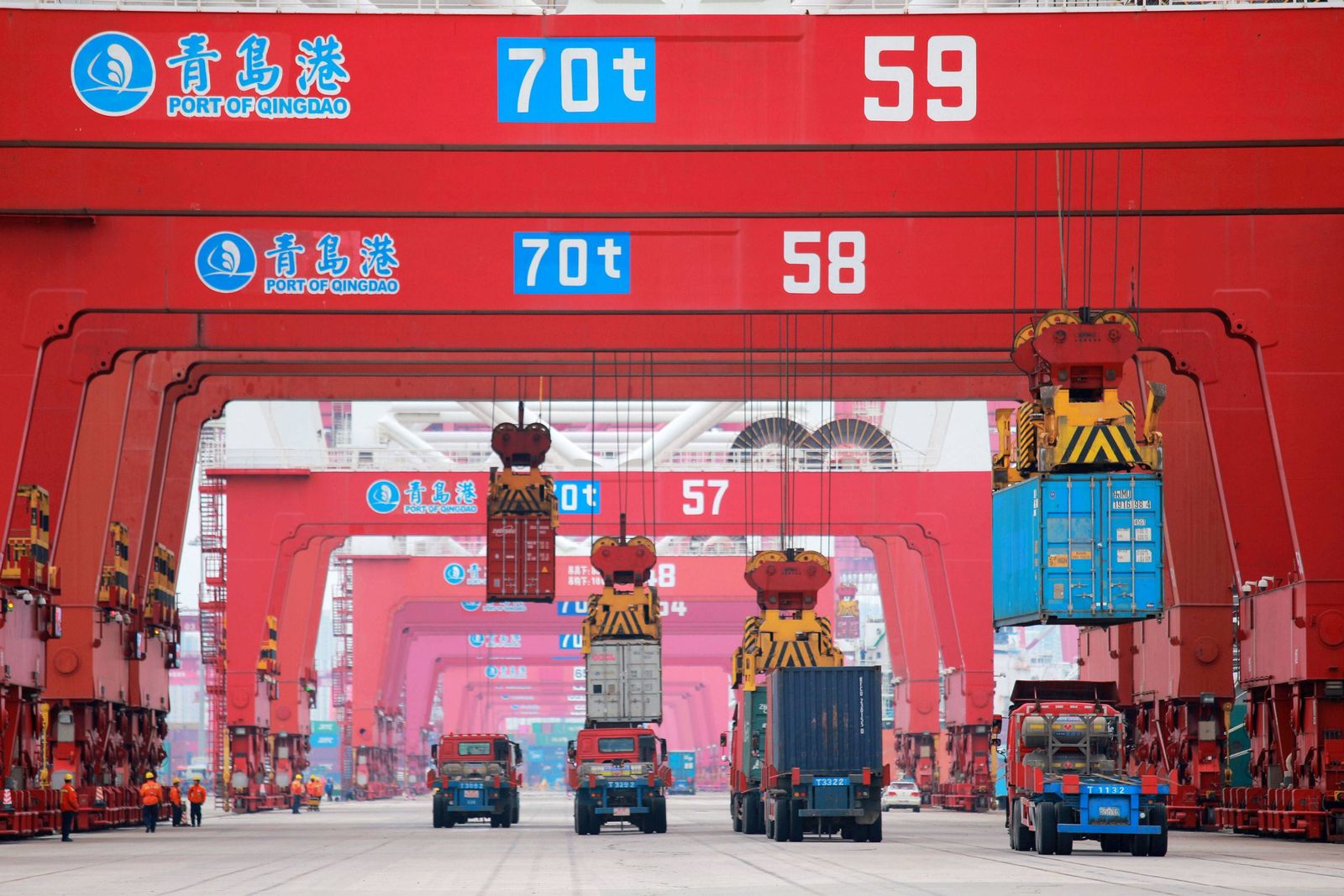 Container terminal in the port of Qingdao 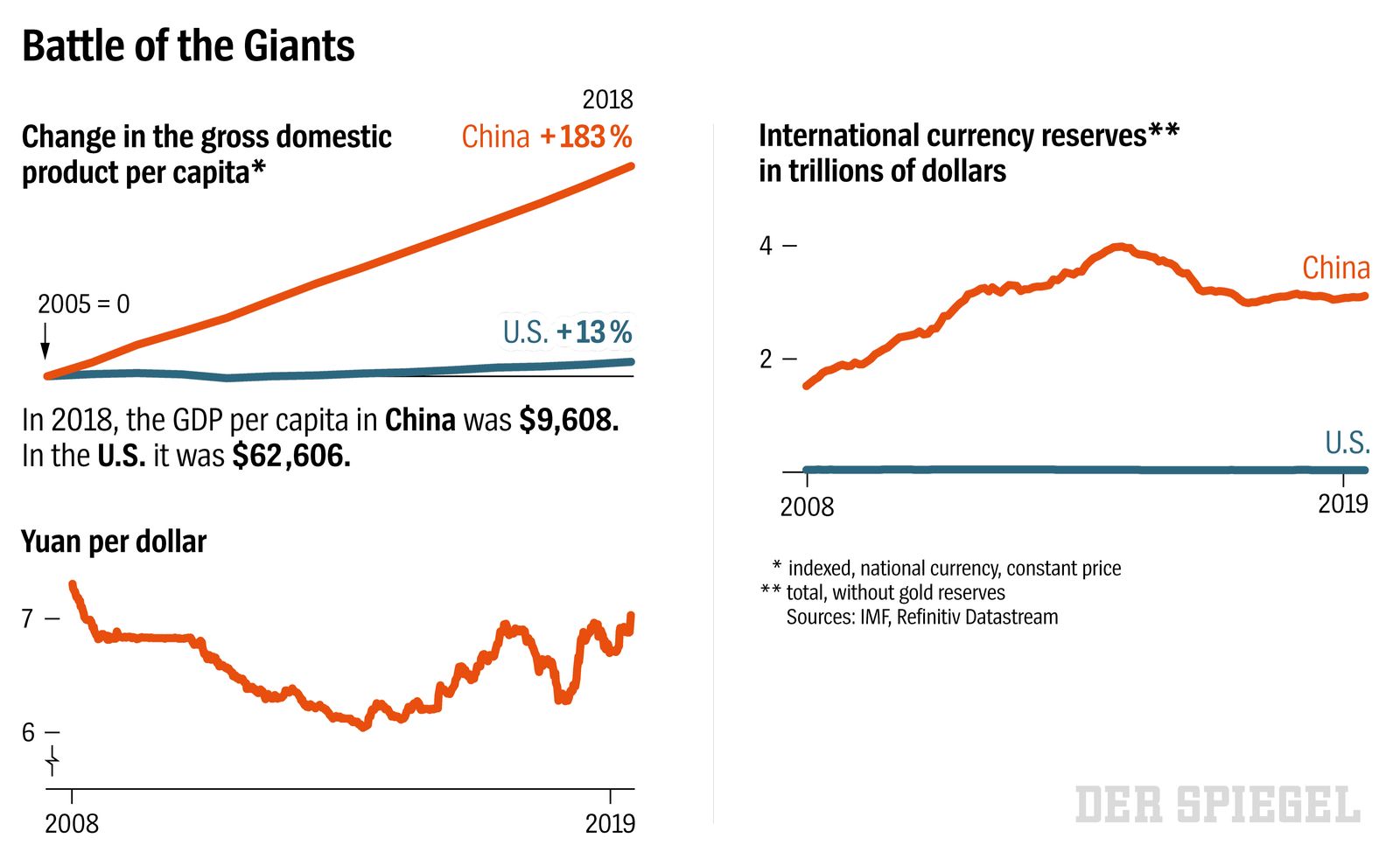