Cushing is the kind of place where you'd expect to see a cowboy ride around the corner and tie his horse to a rail in front of the Buckhorn Bar. This sleepy town of 8,000 on the Oklahoma prairie comes complete with a main street that could double for a set in a Western. Its biggest attractions include a defunct train station and a run-down movie theater, where the price of admission is $1.50.

Robert Felts, a friendly old man who works for the Cushing Industrial Authority, likes to show visitors the historic oil pump in the middle of town. He tells the story of how, in 1912, a giant oil field was discovered nearby that placed Cushing on the map and showered it with more than two decades of prosperity. Up to 50 million barrels of oil bubbled out of the ground each year in those days. "Our refineries could hardly keep up," says Felts. To solve the problem, the oil barons of the day had large storage tanks installed in the surrounding prairieland.

There isn't much to talk about besides oil in this small Oklahoma town. But reports on the situation in Cushing get global markets moving at 10:30 every Wednesday morning. That's when US government officials publish a figure that reflects the amount of oil stored in the hundreds of tanks which now stretch for miles along the horizon.

Located at a key intersection in the North American pipeline system, Cushing is home to the largest oil storage facility in the United States. Oil traded on the New York Mercantile Exchange literally changes owners here in Cushing. If the tanks are full, prices sink. But if levels in these tanks fall, prices rise. A rule of thumb for traders: Supply and demand control the market.

Normally, at any rate. But in recent months the conventional wisdom has flip-flopped. Within a year the price of a barrel of crude has doubled, from $50 to last week's high of $100. Nothing seems impossible now. Some analysts see prices rising to between $120 and $150, which would have dramatic consequences for the world economy.

Similarly spectacular price developments have only occurred four times in the last few decades: in 1973, when the Organization of Petroleum Exporting Countries (OPEC) imposed an embargo for the first time; in 1979, as a consequence of the Iranian revolution; a year later, when Iraq invaded Iran; and in 1990, when Iraq invaded Kuwait.

Which leads to one the most provocative questions being asked about the world economy today: Why are oil prices soaring again?

There are plenty of answers. Some hold the crisis in the Middle East and constantly growing demand in China responsible. Others blame producing countries for keeping the oil spigot half-closed.

But none of it's very convincing. "Supply and demand cannot explain the high prices," says Fadel Gheit of Oppenheimer & Co., a leading commodities analyst. Like many in his profession, Gheit believes financial investors are driving up prices. He's reminded of the Internet bubble around the turn of the millennium. According to Gheit, oil is also seeing "excessive speculation" at the moment.

OPEC arrives at the same conclusion. "The fundamentals are right," says OPEC President Mohammed al-Hamli. In fact, the cartel has expected excess supply on markets since early February -- a result of the American economic crisis.

This excess supply would normally cause the price per barrel to fall. Instead, dealers have now broken through the magic $100 threshold for the second time in only a few weeks.

The mood is festive among oil barons, who seem to be unimpressed by global recession fears. Exxon Mobil recently reported its profits for 2007: $40.6 billion, a record for the world's largest energy company, and in international economic history. A company has never made so much money in a year.

Enormous amounts of money are currently changing hands in the business of oil contracts. With the American real estate debacle infecting ever larger segments of the capital markets, from stocks to bonds, investors are seeking alternatives worldwide. Oil, with its supposedly straightforward market rules and ever-rising prices, seems to be a perfect tool for spreading risk and maximizing profit. But many investors will have a rude awakening when they realize that an investment in oil, though it may look different, is no less a gamble than other types of investments.

"I trade in news"

The New York Mercantile Exchange, or NYMEX, is the central arena in the game of trading in commodities like oil. For 100 years traders here, at the southern tip of Manhattan, on the banks of the Hudson River, have traded in commodities like butter, cheese and potatoes -- until they recognized, in 1978, that oil was the future. 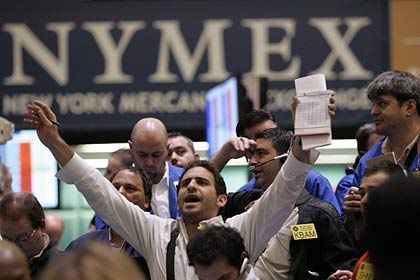 The trading floor at the NYMEX looks like a Roman arena. Traders, standing in the galleries, shout and gesticulate and perform an almost archaic ritual. When two agree on a deal, they write the basic numbers on a piece of paper and toss it into the center of the stage, where a sturdy-looking exchange employee stands, wearing protective glasses so that the flying wads of paper don't accidentally injure his eyes. By the time he picks up one of these pieces of paper and stamps it, many barrels of oil will have already exchanged owners.

"I trade in news," says Chris Motroni, 29. He earns his money as a small, independent trader on the NYMEX, with smaller trades and a lot of self-confidence. "The prices will increase to $115," he says. Motroni loves the mood on the trading floor, where both his father and his brother have also worked. But they got out of floor trading long ago.

The same holds true for the big players, the banks, hedge funds and pension funds, which all trade by computer nowadays. Business on the NYMEX has exploded. The world consumes 86 million barrels of oil a day, but trading volume is 15 times as high. The difference represents bets on future price developments.

The traders' activities have generated sharp criticism, even in the US Congress, not exactly famous as an enemy of the oil industry. A congressional hearing in December went by the blunt title: "Speculation in the Crude Oil Market."

The upshot of all this trading is that speculators now hold up to 45 percent of all oil contracts -- three times as many as at the turn of the millennium. "Prices are being distorted," says Senator Carl Levin, the ranking Democrat on the Permanent Subcommittee on Investigations, which is investigating the speculative trading of oil futures. If supply and demand were the only factors, the price of oil would be at least $20 lower.

How could this have happened?

One of the world's 10 largest energy trading companies, Mercuria, is headquartered on Place du Molard in Geneva, Switzerland. From here, 70 employees analyze the market, dealing with such factors as tanker routes and inventory levels. Thirty billion dollars per year flow through the company's accounts.

CEO Daniel Jaeggi, a former futures trader for Goldman Sachs, knows exactly how the business changed in the late 1990s. "The big pension funds began to diversify their investments, increasingly putting their assets in oil," he says. The pension funds, according to Jaeggi, became the "driving factor in the market."

Wall Street banks were only too happy to service this demand, and Goldman Sachs was at the head of the pack. "They invented a new commodities index that also included oil," says Jaeggi. The new index was wildly successful, and the more major investors put money into it, the more oil contracts Goldman bought and the higher the prices went. An enormous market force had been created.

Everyone jumped into the game. Morgan Stanley, Deutsche Bank and many other financial giants dramatically expanded their trading volume in oil contracts. Investment banks like Goldman even established their own oil reserves, acting as if they were energy companies like BP. They hoped to gain better insight into market events.

As a result, the trading volume in crude oil has almost tripled in the last five years, while demand for the liquid itself grew by only 1.9 percent per year.

Goodbye to Supply and Demand

Once upon a time, all that counted in the oil business was production volume and consumption in the industrialized nations. Those days are gone. Oil is now part of every well-structured portfolio -- as was the case, until recently, with those abstract securities meant to enable the investor to secure a slice of the American real-estate boom. 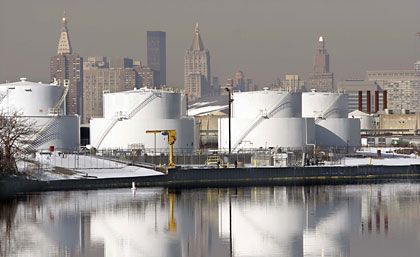 Even banks have gone into the oil business.

But nothing is like it was on the commodities markets. Nowadays even the most insignificant piece of news -- like the nonviolent encounter between US warships and Iranian speedboats in the Strait of Hormuz in January -- can send oil prices on a roller-coaster ride.

The situation in Cushing, meanwhile, can still keep traders on their toes. Let's say fog cripples the port of Houston for a few days, so not enough new foreign crude flows into American pipelines. Supplies in the tanks in Oklahoma will sink, and the supply bottleneck will drive up prices. Or imagine that the McKee refinery in Texas -- a major oil buyer -- partially shuts down after a fire. Crude reserves in Cushing will rise, and prices will fall.

Strange price distortions are fairly normal. All the oil reserves of the United States have long run higher that the five-year average -- yet for historic reasons, prices on the commodities exchanges are based solely on the levels in Cushing and the type of oil stored in the tanks there, West Texas Intermediate.

"It's astonishing that a type of oil that is produced at a level of only about 300,000 barrels a day serves as the benchmark for the whole world," says Eugen Weinberg, an analyst at Germany's Commerzbank. He even believes that market players "attempt to influence" the key Cushing statistics "through their targeted actions."

Classic models, on the other hand, hardly play a role anymore in explaining the price of oil. The fact that relations with Iran have eased a little, or that there has been cautious improvement in Iraq, won't interest traders. They alternately attribute price changes to the crisis in the Middle East, to winter, to unrest in Nigeria and to exploding demand in China.

"None of this is new," says Fadel Gheit. "There hasn't been peace in the Middle East since Biblical days. And the conflict in Nigeria has also been going on for 40 years." Not to mention the recurring return of winter.

Gheit has been in the business for 30 years. He worked at Mobil Oil and JP Morgan before moving to Oppenheimer. He remembers oil prices of $9 a barrel. In the hearings before the US Congress, he served as a star witness of sorts, attesting to the madness of the speculators. "The traders use every excuse in the book to drive up prices," he says, "it's pure hysteria." On some mornings, when he arrives at his office in Manhattan, London traders have driven up prices by $4 a barrel overnight, perhaps because a pipeline burst somewhere in the world. "I have a degree in engineering," says Gheit. "This isn't heart surgery. It's a plumber's job, child's play." The damaged pipeline was probably repaired even before Gheit found out about it -- but after the traders made their profits.

The question is, how long can these galloping prices continue without doing permanent damage to the US and world economies? Rising prices for gasoline, heating oil and airline tickets will increase inflationary pressures and stifle demand in the short to medium term.

"In the end it's a straw that breaks the camel's back," says Gheit, a native Egyptian. Or it's like a weightlifter hefting weights, he says, until someone places a pencil on top and he crashes to the ground.