SPIEGEL: Mr. Rogoff, the eurozone finance ministers are likely to soon provide Greece with new loans totalling €130 billion ($171 billion), with the aim of stabilizing the country for the next few years. Will that save the euro?

Rogoff: It is hardly the final word, even for Greece. The mountain of debt in Greece is simply too big and the country is not competitive. Indeed, it's going to be very difficult to keep Greece in the euro zone.

SPIEGEL: But the government has announced tough austerity measures. Pensions are being cut, wages frozen. Those kinds of measures are almost unheard of in Europe.

Rogoff: But they're still not enough. To make Greece competitive, wages would have to be halved. That is impossible to implement politically, but without a steep wage cut, the economy will continue to stagnate. Greece urgently needs the prospect of growth. It is currently experiencing its fifth consecutive year of recession. This is a failure of historic dimensions.

SPIEGEL: But surely it can't get any worse? Many economists are saying that the crisis in Greece has bottomed out and the worst is over.

Rogoff: I would be more cautious. The problem in Greece is not an ordinary recession but a full-blown financial crisis, something which countries usually take a lot longer to recover from. This kind of economic collapse goes much deeper than a normal slowdown. The longer the economy continues to shrink, the more restless the trade unions get, and the more pressure builds up on politicians to put an end to the misery.

SPIEGEL: What cure would you prescribe?

Rogoff: The government in Athens should be granted a kind of sabbatical from the euro, while otherwise remaining a full member of the European Union. The country would leave the monetary union and reintroduce the drachma, for example. The drachma would immediately trade at deep discount to the euro, making Greece's export and tourism sectors competitive again. Once the country had achieved a higher level of social, political and economic development, it could return to the euro zone.

SPIEGEL: Most European politicians seem to dismiss that as unviable. They see a Greek exit as the beginning of the end for the euro zone.

Rogoff: I don't see it that way. Of course, Europe would have to assure Greece that it would not be punished in any way for taking such a step. And there would have to be a credible road map for Greece's eventual return.

SPIEGEL: If Greece were to leave the euro zone, a wave of panic might engulf other countries struggling with debt, such as Portugal. How can we prevent the contagion from spreading?

Rogoff: If Greece leaves the euro, the markets will demand sensible answers to two questions. First, which countries should definitely keep the euro? And second, what price is Europe prepared to pay for that? The problem is that the Europeans don't have convincing answers to those questions.

SPIEGEL: What advice would you give Merkel and her counterparts? Should they tear the euro zone apart?

Rogoff: No, certainly not. We are talking about bending not breaking, with one or more periphery countries allowed to leave temporarily in order to enjoy greater flexibility. There is currently no simple solution for this unparalleled crisis. The big mistakes were made in the 1990s.

SPIEGEL: Does that mean the whole idea of the euro was a mistake?

Rogoff: No, a common currency for countries like Germany and France was a reasonable risk, given the political dividends. But it was a grave mistake to bring all the south European states into the euro zone purely for reasons of political union. Most of them were not ready for it economically.

SPIEGEL: That may well be, but the fact is that now they are part of the monetary union, and that can't simply be unravelled.

Rogoff: Which is why there is only one alternative: Either the euro completely collapses -- with all the catastrophic consequences that would entail -- or the core members of the currency union manage to turn the euro zone into a genuine political union.

SPIEGEL: Europe has recently agreed on a fiscal compact committing all members to better budgetary discipline. Is that a step in the right direction?

Rogoff: Yes, but it will by no means suffice. All this treaty does is give the markets the temporary illusion that the problems have been solved for now. It has achieved nothing more than that.

SPIEGEL: What is needed instead?

Rogoff: What the monetary union needs more than anything is a central government, including a a finance minister, with significant tax and spending authority. The individual countries should also stop insisting on national control of banking regulation. That is a matter that should be dealt with exclusively at European level.

SPIEGEL: Do you honestly believe that the countries in the euro zone can bring themselves to hand over that much more power to Brussels?

Rogoff: The terrible thing is that few countries in Europe seem genuinely prepared for that. Those politicians who know what is needed keep quiet, fearing opposition from the voters. But the pressure of this crisis will create a momentum whose scope and impact we cannot yet imagine. At the end of the day, the United States of Europe may well come about a lot quicker than many would have thought.

SPIEGEL: With all respect to your optimism, the Europeans are unlikely to play along with that. The popular opinion in most member states is that Europe has far too much power, not too little.

Rogoff: Europe is in an interim stage, quite similar to that in late 18th century America. The ratification of the United States constitution in 1788 was preceded by 12 years of a loose confederation, which sometimes worked but usually didn't. Europe is in a similar situation today. States are like people, it is difficult to sustain a stable half-marriage; either you go for it or you forget it.

SPIEGEL: Many politicians in Europe think that the introduction of euro bonds would pave the way for a marriage later. Do you share that opinion?

Rogoff: No. In the current situation euro bonds would be absolutely the wrong solution. How could Germany protect itself if the French minister of finance makes a few bad decisions? The subject of euro bonds will only become relevant once the political union has been established.

SPIEGEL: Economic imbalances within the euro zone are regarded as one of the main reasons behind the current mess. The southern European states accuse the Germans of exporting too much. Do they have a point?

Rogoff: That is absurd. Portugal's and Spain's problem isn't Germany, it's China. The south Europeans have to understand that they cannot maintain their current standard of living in the context of globalization without significant economic reform. There are great opportunities for those who can adapt to the new realities.

SPIEGEL: That's not really music to Spanish or Italian ears.

Rogoff: Perhaps, but I think most Italians and Spaniards well understand the challenges.

SPIEGEL: What reforms do the governments need to implement?

Rogoff: Wages in southern Europe have risen sharply over the past few years, but these countries traditionally produce relatively simple goods like textiles. They are no longer competitive in a global context, which is why production has shifted to Asia. The Federal Republic of Germany, by contrast, has an innovative industrial sector whose high-quality products are very much in demand in emerging economies. That is why Germany has been the winner in the globalization process, while Portugal, Spain, Italy and others are among the losers.

SPIEGEL: That is why some economists have suggested that Germany should increase wages to strengthen demand in Europe. Would you agree with that?

Rogoff: No, because Germany faces many competitors outside Europe, who would jump at the chance of seeing a less competitive Germany. There are only two options. First, the south European states have to invest a lot more money in education and aim to produce better-quality goods. At the same time, they also have to lower wages in some industries to keep up with the competition from emerging economies like China, India or Brazil.

SPIEGEL: Do you think the euro zone will have the same members in 2015 as it does now?

Rogoff: It may well be the case that all current members remain in the euro zone, and that Germany keeps on shouldering the ever-increasing debts of other countries. But the price of such a scenario is very high for all involved: southern Europe would become embroiled in permanent stagnation and the German economy would eventually be dragged down to a slower growth trajectory. 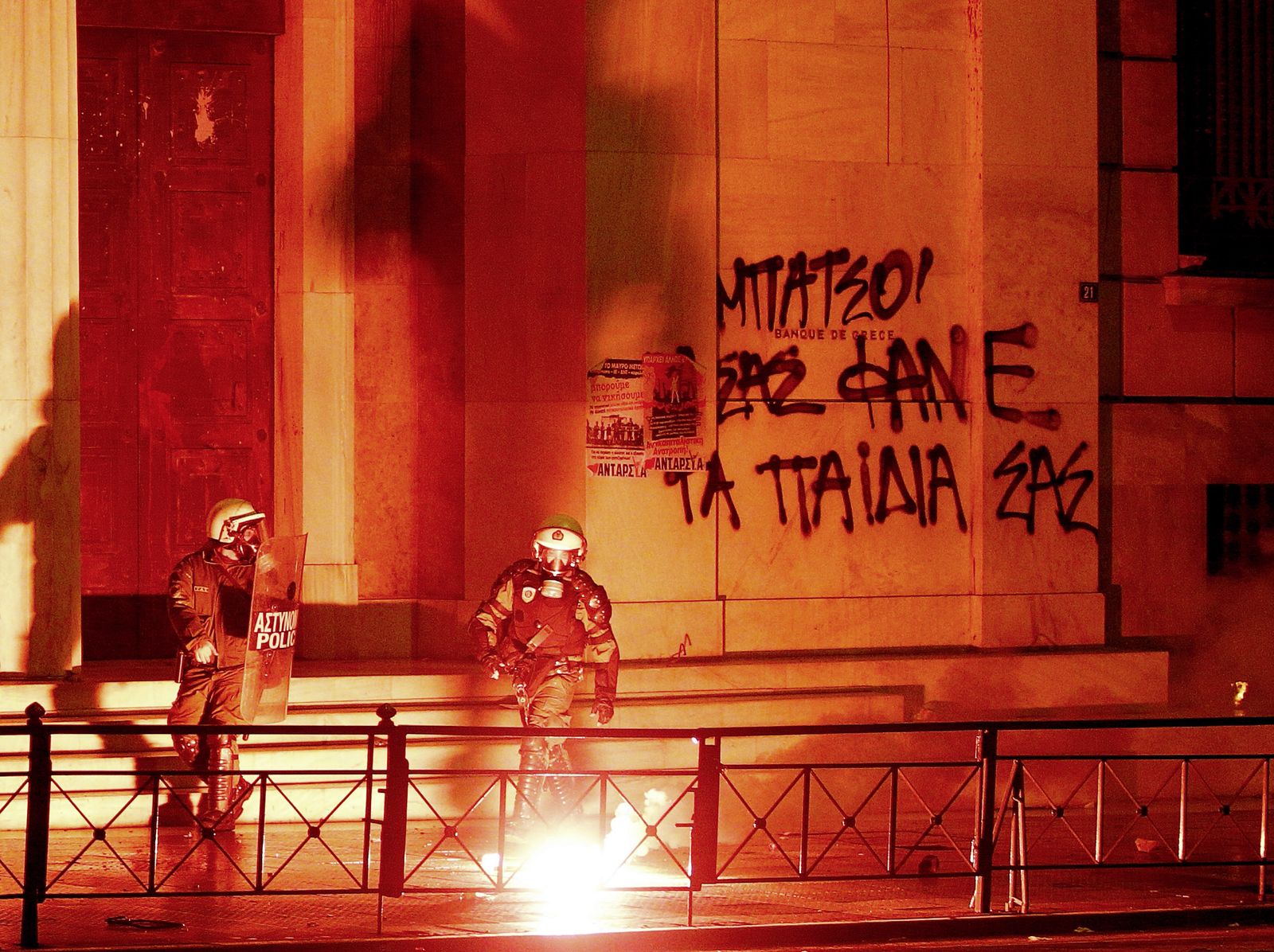 A Feb. 12 protest in Athens: "It was a grave mistake to bring all the south European states into the euro zone."