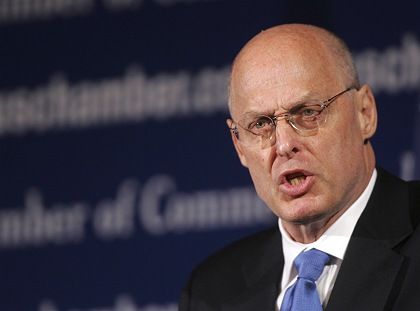 Treasury Secretary Hank Paulson's proposal "does not even meet the minimum standard of improving transparency."

Lets see. In the middle of perhaps the greatest financial upheaval since the Great Depression, Treasury Secretary Hank Paulson is proposing a change in financial regulations which basically amounts to a big wink to Wall Street. His plan will go nowhere, both for political and practical reasons. In fact, it does not even meet the minimum standard of improving transparency, which would reduce the possibility of a similar crisis in the future.

The main point of the Paulson plan is to make regulation more efficient. It notes that changes in the capital markets are:

"... pressuring the US regulatory structure, exposing regulatory gaps as well as redundancies, and compelling market participants to do business in other jurisdictions with more efficient regulation."

So what does the plan actually propose?

The one clear improvement is more regulatory oversight for mortgage lenders. Otherwise everything else in the plan consists of rearrangements and clarifications of current regulatory responsibilities, at least in the short and medium run. For example, responsibility for regulating insurance companies would gradually be shifted from the state to the federal level. And the SEC and the Commodity Futures Trading Commission (CFTC) should be merged. The Paulson plan makes sure to note that the new combined agency should engage in faster approvals of new financial products. As the executive summary says:

"The SEC should also consider streamlining the approval for any securities products common to the marketplace as the agency did in a 1998 rulemaking vis-à-vis certain derivatives securities products. An updated, streamlined, and expedited approval process will allow US securities firms to remain competitive with the over-the-counter markets and international institutions and increase product innovation and investor choice."

I have nothing against regulatory efficiency, and I applaud financial innovation.

But the Paulson plan belongs in a fictional world where financial institutions do a good job in regulating and monitoring themselves. Unfortunately, thats not the world we live in.

The most striking thing about the current problems is just how much money the banks and the investment banks have lost. They apparently had no idea of how risky their own exposure was. The supposedly smart guys were simply stupid.

For me, the main lesson from this debacle is that both banks and investment banks must be required to fully report what securities they are holding, both directly and indirectly. No more off-the-book special purpose vehicles, no more hiding derivatives under the table. If a bank or an investment bank is holding a security, they have to publish the amount and the basic characteristics.

This requirement may seem onerous to Wall Street, and it is. But its for the benefit not just of the financial system, but for the banks themselves, who appear not to be able to keep track of their own risks without assistance. Everything should be fully reported. Without this simple step towards transparency, nothing else matters. With transparency, other market participants have the chance to make their own judgement.

For political reasons, nothing is going to happen until after the presidential election. The Democrats in Congress have no reason to sign onto the Paulson plan. But the next president -- whoever it may be -- should put financial transparency at the top of the regulatory agenda.