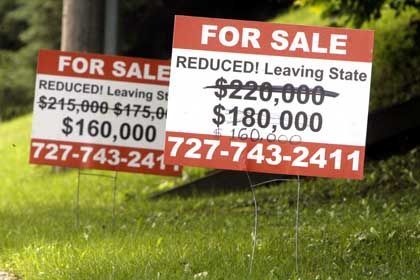 The presidents of the world's central banks, be it in the United States, Asia or Europe, have their own language. It allows them to talk a lot without actually saying much, and for good reason: Anything that goes beyond empty phrases could trigger an earthquake on the world's securities markets.

Last Thursday, when the first shock waves of the American real estate crisis had just reached Germany and mid-sized bank IKB had just been saved from collapse with a big financial infusion, Jean-Claude Trichet, president of the European Central Bank (ECB) was already talking about a "normalization" and urging investors to keep their cool. The fact that he was calling for calm was enough in itself to make investors nervous.

But on Wednesday of last week, even Trichet was having trouble keeping his composure. The financial bailout he launched was bigger than anything the world has seen since the terrorist attacks of Sept. 11, 2001.

The ECB's cash infusion provided banks with close to €95 billion at 4 percent interest on Thursday. That was followed up with another €61 billion cash injection on Friday, and a third injection of €47.67 billion on Monday. Other central banks around the world, including the US Federal Reserve under its chairman Ben Bernanke, have followed suit with their own cash injections, with Japan's central bank injecting 600 billion yen (€3.6 billion) into money markets Monday.

The liquidity the ECB was offering banks was even more than it had made available after Sept. 11. But instead of allaying fears, this concerted action on the part of international high finance only caused additional nervousness on the markets.

What's wrong with the world's financial markets? Why is cash, supposedly available in abundance for years, suddenly scarce? And how can it be that mortgages issued to borrowers with poor credit in the United States could trigger such a strong reaction in Europe and even Asia?

Stock prices slipped across the board in Tokyo, New York and Frankfurt. Everyone was nervous, from bank executives, regulators and central bankers to ordinary investors who had invested their savings in a supposedly safe money market fund, only to find that it too had invested some of its assets in the US real estate market.

Rumors were enough to throw the financial world into turmoil. Germany's WestLB was on the brink of bankruptcy. The bank, after admitting that it was affected by the problems in the US, was quick to add that its exposure was limited.

But how reliable are such statements? IKB had claimed shortly before its near-collapse that everything was going swimmingly. BaFin, the German federal agency that regulates the financial services industry, is already investigating the German bank Sachsen LB, which invests indirectly in the US real estate market. The crisis even prompted Deutsche Postbank to redirect several hundred million euros of its funds.

There's a shudder of fright running through the executive corridors of the big banks. This led to a serious shortage of liquidity last week, prompting the ECB and other central banks to take swift action.

The alarm signals were coming from the money market, the vast currency bazaar where banks provide each other with the liquidity they need to keep their day-to-day operations afloat, and where some banks do the lending while others borrow overnight. The system has been in place for years.

The money market is the heart of the financial world, essentially providing it with its blood flow. But last week it was threatened, for the first time in a long while, by the possibility of heart failure. Analysts speculated that failures among European banks could be the consequence of a crisis on the US mortgage lending market. Professionals in money market departments became nervous. Could they still trust their counterparts at competing institutions? Or was it possible that they would be unable to repay the funds they were borrowing?

This uncertainty prompted a jump in interest rates, threatening to bring the lending business among banks to a standstill. To prevent this from happening, the ECB pumped several billions into the market's principal arteries.

Although alert central banks can prevent the money cycle from collapsing, they have no power to correct the true causes of the turbulence. These causes go back a number of years, and they depend primarily on the fact that money, from a global perspective, seemed abundantly available and, as a result, was cheap.

After Sept. 11, 2001, then US Federal Reserve Chairman Alan Greenspan kept interest rates low to boost the economy and keep it growing. In addition, pension funds, fat with their investors' billions, were looking for investment opportunities. The banks, for their part, had developed a new method that allowed them to loosen their lending requirements while keeping the attendant risks off their books.

They did this by bundling the loans they had issued to various customers and selling them as packages. Funds acquired them, put together their own packages and then sold them to other investors. The banks argued that this would distribute the risks of the global financial system more broadly. If a major borrower went belly-up it would no longer affect the lender as seriously as before.

This is one of the advantages of the system. But it also has a serious drawback.

Banks are tempted to issue much riskier loans, not just to US mortgage borrowers unable to provide sufficient collateral, but also to private equity firms with little equity capital of their own seeking to take over other companies in leveraged buyouts.

These corporate takeovers, based to a large extent on borrowed funds, now pose a similarly serious risk to the financial markets as mortgages. The European Central Bank warns that this could lead to more deep-seated problems.

In 2006, banks issued more than $650 billion in loans for leveraged buyouts. In many of these cases, private equity firms put up only 20 percent of the purchase price, borrowing the rest from the banks.

Here too, financiers sold on much of the credit risk. But this doesn't exactly eliminate the risk. Instead, it suddenly pops up in places where it is least expected -- at state banks, for example, or smaller institutions seeking their piece of the pie. In this manner, the crisis in one market can spread around the world in no time.

Subprime mortages have proved to be a major problem for banks.

The so-called ABS funds also play a role. German investment funds and banks, such as Union Investment, Frankfurt Trust or Sal. Oppenheim, have already been forced to close their ABS funds, as more and more panicked investors are suddenly pulling out their money. This leaves the funds with shares but no one to buy them.

ABS funds derive their name from the fact they invest in something called asset-backed securities. The value of these securities depends on the underlying loan packages, which can be secured with anything from shaky real-estate loans to high-quality corporate loans. Investors rarely know what kinds of assets are used to back these securities. When in doubt, even banks and fund managers depend on rating agencies like Moody's or Standard & Poor's to rate the loans.

In this crisis, investors and banks are now painfully realizing that an AAA rating, which stands for excellent credit quality, isn't always as dependable as it appears. "The rating agencies predicted exactly zero of the 10 biggest disasters of recent years," Hans-Helmut Kotz, the president of Germany's central bank, the Bundesbank, said as far back as 2003.

Despite this lack of dependability, banks like Germany's WestLB based their investment strategies on precisely these ratings. WestLB claims that 87 percent of even its second-class US mortgage loans, or subprimes, were rated AA or above. According to a spokesman, the publicly held bank "invested, across its entire commercial and banking portfolio, €1.25 billion in subprime securities." This enormous sum also includes the risks lurking within the WestLB's US subsidiary, Brightwater Capital Management. Despite its good rating, no bank today would trade places with WestLB in its current situation. The market has collapsed completely.

In its investigation of Sachsen LB, German regulator BaFin is taking a closer look at the bank's two Irish subsidiaries, Ormond Quay and Georges Quay, in which Sachsen LB has about €20 billion invested. The size of the fund alone is disconcerting. This week the bank will be forced to refinance short-term loans worth several billion euros, although other state banks are apparently prepared to inject the needed capital. "We have no liquidity problems at the moment," a Sachsen LB spokesman said bravely.

IKB is a case in point for how quickly this game of Monopoly can end in disaster. On July 27, one of IKB's traders called Deutsche Bank to find out what the daily rate was for his bank's credit line. "You're on hold," his counterpart at Deutsche Bank replied. In other words: no more loans and no fresh injection of cash. This is a little like turning off the water when someone has just soaped up in the shower.

When two other banks were also unwilling to lend IKB the cash it needed, its senior executives became alarmed and eventually notified BaFin. On the evening of July 27, IKB's executive board finally revealed the scope -- and cause -- of the company's problems. IKB had invested about €7.8 billion in the US subprime mortgage market.

Jochen Sanio, the head of German regulator BaFin, was in for a shock when he reviewed IKB's financial details. The company had invested €544 million and its Luxembourg subsidiary another €757 million directly in high-interest, high-risk securities.

Rhineland Funding Capital Corporation, another subsidiary of IKB, invested €6.5 billion in loans to investors with bad credit ratings. The German credit industry promptly provided a total of €3.5 billion to offset potential losses. A hastily performed analysis had revealed that the small, Düsseldorf-based bank could be expecting write-offs of about 45 percent.

The total market for these types of loans is estimated at about $1 trillion. If the value adjustments at IKB are typical of the industry, the US real estate crisis is costing banks, insurance companies, funds and investors $450 billion worldwide. The uncertainty in the financial markets is also so high because hardly anyone knows where additional risks may be lurking. Many investments which are now proving to be unsound don't even appear on balance sheets. Germany's Deutsche Postbank is a case in point.

The bank invested in two subsidiaries of the same Rhineland fund that had sent IKB into a tailspin. Deutsche Postbank also issued loan guaranties. According to a bank spokesman, "Deutsche Postbank itself provided lines of credit in connection with Rhineland." The scope of this commitment amounted to about €600 million. But so far none of this has appeared on the bank's balance sheet.

"Off-balance sheet financing is a more convenient form of refinancing," says a spokesman. After a hastily convened meeting with banking regulators, Postbank has now changed its policy. "We have taken steps this week to ensure that these investments will appear completely on our books," bank officials said in a statement.

This is the sort of news that has kept the financial markets constantly jittery. The consequences are anyone's guess. Private customers and businesses alike will suffer if lenders become less generous in issuing loans. The former would have to reduce their consumption and the latter their investments. This could spell an end to the boom which Germany and other countries are currently enjoying.

Fortunately on Monday, as the ECB tried once again to allay fears in the rattled credit markets by injecting another €47.67 billion into the banking system, European stock markets seemed to be rebounding. The ECB said that market conditions were "normalizing."

But it remains unclear whether this will be enough to restore business as usual. In the mean time, Willem Buiter, a professor of economics at the London School of Economics, has his own recommendation for the worried investor: "Pray that the central banks do the right thing."