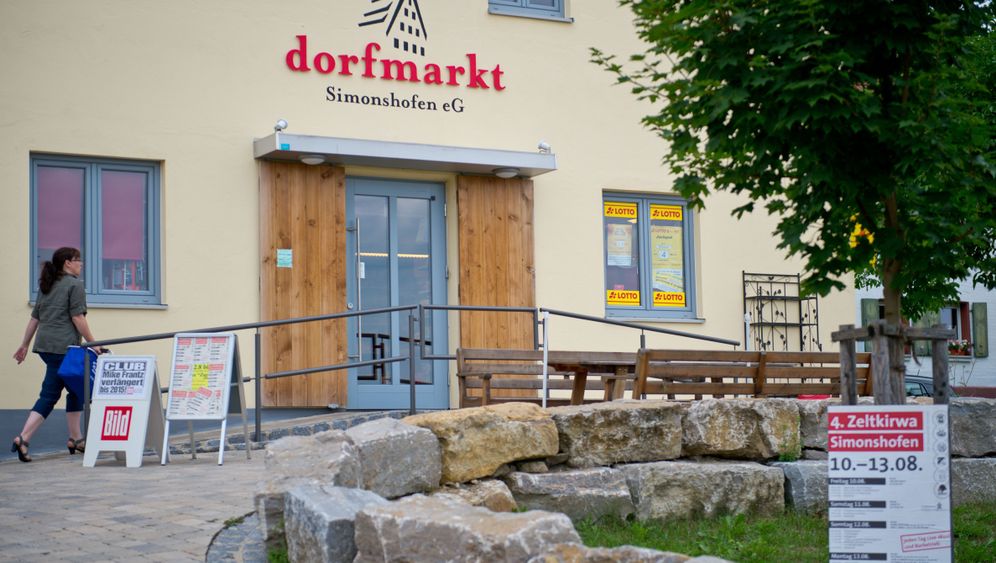 This spring, the last shop in the western German village of Thier closed. The little café and bakery was the place people in the town of 1,300 went to buy bread. More importantly, it was also where they could gather and hear the latest town gossip.

"It was a wake-up call," says Thomas Karthaus, who along with a handful of town residents decided to open up a community-owned store to bring back a place where villagers could meet.

Like many little towns in Germany, Thier, which is located in a rural area about 46 kilometers (29 miles) from Cologne, has become a victim of twin demographic trends: a mass exodus from rural to urban areas and general population decline. In other words, fewer babies are being born in Germany and those who do make it into this world are moving to big cities as soon as they grow up.

For those who are left behind, village life is threatening to become particularly lonely. Small town butchers, bakers, doctors, banks and other business owners are closing up shop, leaving villagers with little choice but to drive to bigger cities for any kind of service. But now German villages like Thier are taking matters into their own hands, opening modern day village stores in an effort to help keep these hamlets alive.

"At some point the last store in town closes," says Kristina Pezzei, a former journalist, who visited 21 village stores for a soon to be released book about the topic. "Then the pioneers say, 'We have to do something, we have to save our stores,'" says Pezzei, now a researcher at the Federal Research Institute for Rural Areas, Forestry and Fisheries.

The village way of life still holds mythic appeal in the German mind, says Claudia Neu, a sociologist at the Niederrhein University of Applied Sciences in Mönchengladbach. "Germans are very proud of their villages, even if they don't live in them," she says. "People still think it's a better place to raise kids and they tend to idealize life in the country."

About 30 percent of Germans still live in villages, and for them village stores preserve the type of small town life that many find attractive, says Neu. "While they won't necessarily stop young people from leaving, they are important for the quality of life for those who remain," she says.

Neu estimates that there are more than 200 such stores in Germany with more on the way. "I would say at the moment, we still haven't reached the peak," she says.

Modern day village stores, like the one that Thier is looking to open next year, combine all the services that villagers need -- everything from a bakery to banking. "For each village, it's different," says Pezzei. "But in the last three or four years there has been a real boom."

In Thier villagers didn't want to sit by and idly watch their town recede. In recent years an elementary school in the town closed and so did other shops and businesses.

"We wanted to keep the town livable," says Richard Schmitz, who sits on a town committee responsible for opening the village store. Schmitz, whose son now lives in London, says the Thier cafe that closed this year was especially important for the elderly and others in town who couldn't drive. "Kids could get a little money from their parents to buy bread there," he says. "We used to have a blind man who would come in every day to buy coffee."

The idea of a store is popular among Thier residents. The group sent out a survey about the possibility of a store to 500 residents and 350 people responded -- with about 95 percent positive about the idea, says Karthaus. They have already sold 190 shares at €200 ($261) a piece to raise money to open the shop, and now they are visiting other village stores around the country to gather ideas and to better understand how to make things work.

That's how Karthaus, Schmitz and two other Thier villagers ended up 100 kilometers (62 miles) away in the village of Barmen, a rural part of a city called Jülich, on a drizzly October evening. Barmen's six-year-old store has now become a model for other towns looking to open village stores.

For Barmen the savings bank was the last straw. When that closed in 1998 villager Heinz Frey went door to door collecting money from town residents to open up their own village center, explains Christian Klems, a retiree whom Frey convinced to join the cause. At first, banks and investors kept turning them down. Then they raised money from donors on top of selling shares of €250 a piece to 100 villagers. They formed a corporation and finally got the capital they needed to buy the old savings bank. The village center opened its doors in 2006.

Since then the number of villagers has held steady, says Klems.

Today the 150 square meter store sells basic staples like fresh meat, vegetables and bread, as well as cleaning supplies, alcohol, magazines and other sundry items that villagers may need. In addition, there is an ATM machine, a tiny post office, a travel center, a place to register a car or renew a driver's license and even a doctor who comes once a week from a neighboring town. The store employs one full-time employee along with seven part-time workers, including a professional with a business background who decides what to stock.

Though there are bigger supermarkets about five to 10 kilometers away, even villagers with cars prefer to shop at the store.

"It's great," says Jörg Berger who has lived in town for 20 years. "Now I don't need my car to buy things," says Berger, who comes to the store about twice a week. "I can buy my cat food here, send packages and faxes and get money, it's very practical."

"I am always in a hurry," says Ina Fuchs who comes in about three or four times a week. "The store belongs in the town; shopping should be this easy," says Fuchs carrying away dish soap and fresh chicken breasts.

Because they were getting so many inquiries from other towns, those who run the Barmen store created a separate consulting firm. Klems estimates that they have helped set up about 10 stores, none of which are losing money. They also have another 25 stores in the works.

They help towns figure out the financial feasibility of a project, which business model it should adopt, what residents want and how to get it up and running. Georg Schmitz, one of the Barmen consultants tells the Thier group that, for example, the Barmen store needs to make between €380,000 and €420,000 a year to break even. About a one-third of sales come from meat, which supports money losers like flower sales.

The café in the back is the most important element of the village store, Georg Schmitz tells the group. There is no way the village store can compete with discounters on price or with upscale supermarkets on variety, but they offer a different experience than what one gets at a bigger store in town, he says. "Our goal is to make a social profit -- and that advantage to our community can't be measured in euros," he says.

"This water cooler effect is what makes a village store successful," says Neu. "It fulfills the need for community, knowing that when you go to the store you will see someone you know."

Neu estimates that towns need at least 1,000 residents to support a village store. To keep from losing money, such concepts also need people who are willing to participate, a concentration of homes within walking distance of a town center and residents with high enough incomes to shop at the store, she says.

For some towns, however, it's already too late, says Neu. In the former East German states, for example, too many people left after German reunification in 1990, she says. "Many of the towns are too small and the citizen engagement is just not there."

Towns that can't make a village store work have a tough future ahead, says Pezzei. "There are definitely towns where the light must be turned off."