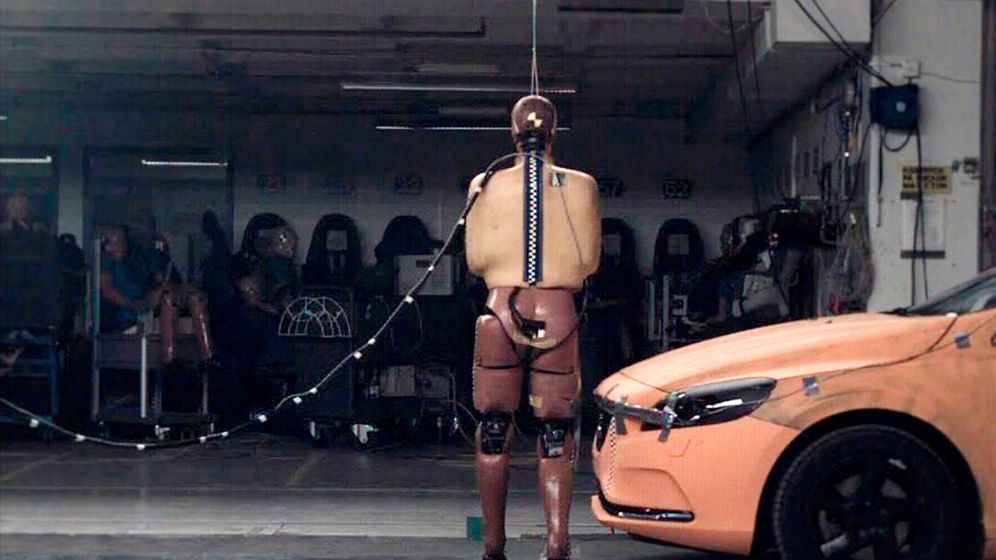 Engineers are well aware that humans and cars make for unequal adversaries when they collide. The difference, says Thomas Broberg, is primarily a matter of their construction: "Cars are hard and people are soft."

Broberg is head of safety development for Swedish car manufacturer Volvo, and he's currently working on making cars less hard. The new Volvo V40 will be the world's first mass-produced passenger car with an external airbag that deploys in front of the windshield if it hits a pedestrian.

With the V40, Volvo is offering something long advocated for by car critics and organizations that promote alternative forms of transportation: safety improvements to benefit those not sitting inside a car, the individuals for whom cars pose the greatest danger. The number of road casualties in Germany, especially the number of pedestrians killed, increased again last year. In 2011, 612 pedestrians lost their lives in traffic, 136 more than in the previous year.

European Union regulations on pedestrian safety have been in force for seven years now, but these rules lag far behind the goals initially laid out by the European Commission. Car hoods and the front end of auto bodies are now required to be more yielding, but originally measures were to be introduced to address the rigid metal frame around a car's windshield as well. Crash researchers know that is the area that causes the most serious head injuries, injuries which are often fatal.

It's not easy, though, to make the windshield frame more yielding. The frame plays an important role in the rigidity of the auto body as a whole. It protects the passengers if the car flips over. Hence an airbag is the only feasible way to cushion a pedestrian's impact as much as possible. Yet the same manufacturers who provide front and side airbags to protect their customers have balked at going to such lengths to improve pedestrians' chances of surviving an accident.

Now Volvo is increasing pressure on the industry as a whole, and at the same time taking the opportunity to improve its own image in an area where it is in danger of losing ground. With its legendary Swedish-made, tank-like cars, the Volvo brand has long been considered a frontrunner in safety engineering. These days, though, nearly all car manufacturers make impact-resistant auto bodies.

Volvo, based in the city of Gothenburg, sells around 450,000 cars a year, making it a minor player in the business. But unlike Swedish carmaker Saab, which fell apart under General Motors' ownership, Volvo is still going strong. After coming close to ruin under Ford, the company is now owned by a Chinese auto manufacturer called Geely, whose most visible product so far was a clumsy Rolls-Royce knock-off.

Unfazed, a new executive team made up primarily of German managers has plans to get Scandinavia's last great sanctum of auto-making back on track. Peter Mertens, formerly with Daimler but now Volvo's senior vice president for research and development, takes the concept of "Scandinavian luxury" as his formula for product development. Mertens depicts Volvo's customers as model citizens -- responsible, educated and sophisticated consumers with plenty of buying power. What could fit better with such an individual's worldview than an altruistic airbag?

Certainly, Volvo's new airbag for pedestrian represents a collection of ingenious developments. Seven sensors at the front of the car must be able to recognize that the vehicle is in fact striking a human leg and not, for example, a shopping cart; gunpowder capsules then lift the car's hood out of its hinges, opening a slit through which the airbag emerges, expanding to its enormous volume of 120 liters (30 US gallons) in a fraction of a second.

The fact that a small company working out of Sweden is the only manufacturer to achieve such a thing casts a rather unflattering light on automobile empires such as Volkswagen, a company which achieves profits in the double-digit billions, yet does almost nothing to protect pedestrians. It's unlikely that Volvo's entire development budget for its pedestrian airbag was more than the €18 million ($23 million) which VW's CEO Martin Winterkorn personally earned last year.

Volkswagen released a statement describing its position on the external airbag as "critical" because "it's impossible to rule out the possibility that accidental deployment would obscure the driver's view of the road." Mercedes makes a similar argument.

It appears, though, that Volvo's airbag will be able to dispel such reservations. It expands into a banana-like shape that covers the windshield frame, but leaves much of the windshield itself unobstructed, since the windshield is a comparatively soft surface and thus not the most dangerous area to crash into. "Accidental deployments are as harmless as they are unlikely," says Broberg, the Volvo safety engineer. He explains that Volvo tested many possible scenarios. Soccer balls and handcarts, for example, failed to activate the air cushion.

Similarly, he says, concerns that kicking parked Volvos to activate their airbags could become a new hobby for the bored are unfounded. The airbag only deploys when the car is traveling at speeds between 20 and 50 kilometers per hour (12 and 31 miles per hour), so in order for a person to activate the device by kicking a Volvo, they'd have to do it while the vehicle was in motion.

"And anybody who does that definitely needs the airbag," Broberg concludes.