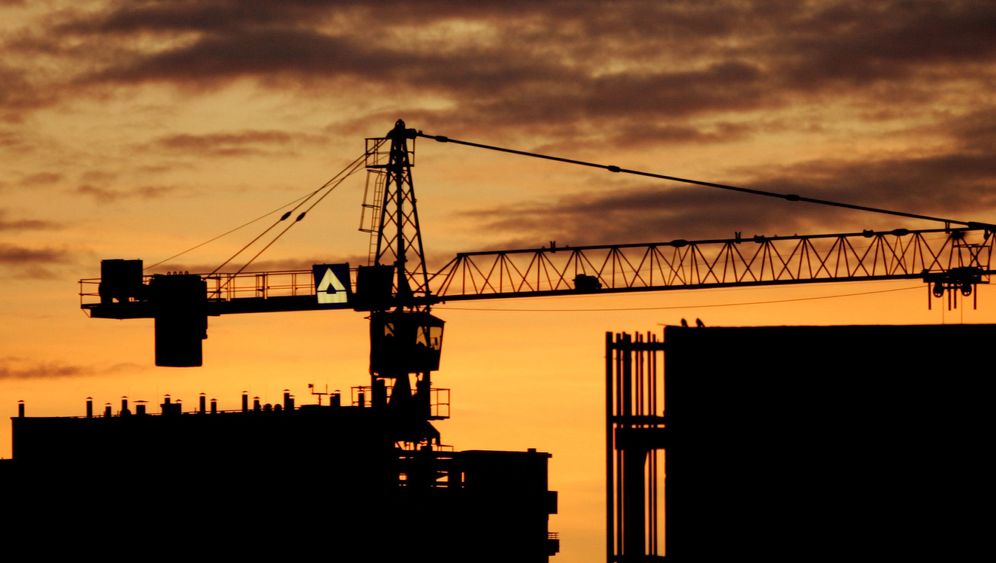 The situation at German construction company Hochtief looks so hopeless that it seems that only a sheik can help. Spanish company ACS wants to take over Hochtief, in which it already holds a 29 percent share. Intervention by a Middle Eastern sovereign wealth fund would allow Hochtief to stave off the Spanish advance.

Chancellor Angela Merkel herself established contact between the two parties, introducing Hochtief CEO Herbert Lütkestratkötter to the economics minister of Qatar at a reception hosted by German President Christian Wulff at his official residence, Bellevue Palace in Berlin.

So far, Qatar has yet to make up its mind. The same applies to the German government, which has been pursuing a strangely back-and-forth course on the Hochtief issue.

The Friday before last, government spokesman Steffen Seibert indicated that Berlin would investigate whether to change the country's takeover law. The chancellor, he said, didn't want to see the construction company broken up or its headquarters relocated from Essen.

Three days later, the investigation was apparently complete. Seibert announced on Monday of last week that tightening takeover legislation "doesn't make sense" and that the government would continue to follow events concerning Hochtief as an "interested observer" -- a role unlikely to make much of an impression on Spain.

It appears a German construction company -- one that is perfectly sound and has next to no debt -- is about to be taken over by a foreign competitor that is itself deeply in debt and may be interested solely in breaking up the company.

The Spanish corporation denies harboring such intentions. Still, taking over Hochtief could allow ACS to sell off the German company's subsidiaries, reducing its own debt.

The Free Market at Work

German Economics Minister Rainer Brüderle considers this an example of the free-market economy. But it could also be seen as a perversion of the market economy, where the party rewarded is not the competent one that has operated successfully, but instead the wily one that takes advantage of lax German laws to buy up a competitor at a give-away price.

Germany industry is now worried about the prospect of a mass sell-off at bargain basement prices. Hochtief is likely only the beginning. Many experts believe Germany companies are facing a wave of takeovers. There is certainly no lack of attractive targets -- around a dozen of the country's 100 largest corporations are considered at risk.

These companies have few debts, plenty of cash and are bringing in good profits, but their value on the stock market is relatively low. Potential targets, according to estimates by the German business daily Handelsblatt, include Infineon, Rheinmetall, MTU Aero Engines, semiconductor manufacturer Aixtron and biotechnology company Qiagen (see graphic). These companies don't have major stockholders who could prevent a takeover and they have a low price-earnings ratio, meaning that a buyer could recoup the takeover costs within a few years from dividends.

The takeover wave could affect top DAX-listed corporations. Energy giant E.on, for example, is considered a profitable target for takeover, as it could easily be broken down into its component parts and sold off. The only thing hampering a takeover is E.on's high market value, which is currently around €42 billion ($59 billion).

It doesn't really matter which German company is attacked first -- the government isn't going to provide much assistance to any of them. That is due to basic political and economic beliefs held by many members of the government. The economics minister, for example, believes an export-oriented country such as Germany, which relies on open markets, can't afford to seal itself off.

The German reluctance to help out also results from the attempts to save Opel, which saw the German government shown up by Opel's parent company, General Motors. GM suddenly decided it didn't want to sell Opel after months of negotiations. Chancellor Merkel doesn't want to bring about that kind of embarrassment again.

There would be no reason to object to these arguments, if everyone were playing by the same rules. But unfortunately other countries, especially Spain and France, have a very different understanding of economic policy.

According to their views, it is not the promotion of the free flow of capital and goods that is desirable. Rather, they prefer whatever serves their own interests. When a foreign company makes a grab for a Spanish or French corporation, French President Nicolas Sarkozy and Spanish Prime Minister José Luis Rodríguez Zapatero plunge personally into the fray.

France makes use not only of political pressure, but has also created its own legal requirements for government intervention. Foreign corporations must secure approval from Paris before they can take a stake in French companies that are active in any of 11 key industries.

These eleven sectors include the defense and energy industries, as well as companies working in biotechnology and IT. Yogurt production, apparently, also counts among the nation's strategically important industries -- or so it would seem, given that Sarkozy stepped in to prevent a takeover of Danone (known as Dannon in the United States) by American corporation PepsiCo. "France must protect its businesses," Sarkozy said.

Siemens too recently felt the effects of this policy, as France fended off the German company's attempt to take over sections of French industry conglomerate Alstom. The fight over approval for German ICE trains passing through France en route to London, a conflict that escalated last week, also shows how far Paris is willing to go in defending itself against foreign competitors.

Different Rules across the EU

Spain is similarly militant in its protection of domestic businesses. Four years ago, when E.on wanted to buy utilities provider Endesa for a final price of more than €40 billion, the country went so far as to pass a new law that made it more difficult for the German company to take the firm over. The Spanish regulatory authority was granted the power to analyze the takeover and impose additional conditions if necessary -- which it immediately did, declaring that E.on should refrain from buying particularly valuable power plants, which would be sold to the competition instead.

Calling this "arbitrary discrimination," Neelie Kroes, the then-European commissioner for competition, moved quickly to initiate legal proceedings. But Spain wouldn't be dissuaded. Prime Minister Zapatero dragged the matter out for so long that E.on eventually gave up on its acquisition plan.

All this doesn't make Zapatero and Sarkozy politico-economic role models. Both have successfully fought off foreign corporations, but this hasn't strengthened their countries' domestic businesses in a sustainable way. In fact, quite the opposite is true. Because companies are operating in a kind of protected zone, many of them, including ACS, are ailing.

France and Spain illustrate one extreme in terms of handling foreign takeover bids. Germany represents the other. Hardly any other country in Europe makes it so easy and so cheap for foreign corporations to acquire domestic businesses.

A would-be purchaser such as ACS can buy up Hochtief shares relatively cheaply. Any party that acquires more than 30 percent of a German corporation must bid to buy the remaining stockholders' shares at a minimum of their average value over the past three months.

Once it has passed the 30 percent hurdle, ACS is no longer required to make Hochtief stockholders any further bids. Instead, the Spanish company can continue to acquire blocks of shares at its leisure, whenever market prices are particularly low, to eventually secure control over its German competitor.

A company stake of less than 40 percent could be enough to allow ACS to raid Hochtief's coffers. With that size of stake, the Spanish company could be able to determine the composition of the supervisory board at Hochtief shareholders' meetings. It could appoint a management team that is well disposed to ACS and that would arrange for profits to be disbursed to the owners.

This type of takeover affects not only employees, who fear their company will be broken up, but also stockholders, who are deprived of a takeover premium they would otherwise be entitled to.

In many other European countries, this kind of takeover would be significantly more complicated for the acquiring company and probably also more expensive -- and thus less likely to take place.

In Britain, a buyer passing the 30 percent limit must submit a mandatory offer to all shareholders based on the highest share price the purchaser has paid in the preceding 12 months. Buyers who already hold between 30 and 50 percent of shares must also continue to make further mandatory offers to the stockholders each time they buy even a single share. Austria, France, Italy, the Netherlands and Spain all have similar regulations.

It is this uneven interpretation of EU guidelines more than anything that aggravates Lütkestratkötter, the Hochtief CEO. He isn't asking for protectionism in the form of the government shielding domestic companies, as is so common in Spain and France. Nevertheless, he says he finds it hard to understand why German companies should be kept at a competitive disadvantage.

Lütkestratkötter has paid two visits to the Chancellery, presenting his request for a change in German takeover law to Merkel's economic adviser Jens Weidmann. But the government has decided not to change the law. They are apparently concerned it would look too much like legislation crafted solely for Hochtief's benefit.

Jochen Homann, a senior official in the Economics Ministry, cancelled a meeting with the Association of the German Construction Industry about the issue at the last minute. The lobbying group wanted to advocate adapting Germany's takeover law to correspond to international standards. But the government doesn't seem to want to discuss the matter any further.

Instead, Germany will remain the model pupil when it comes to company takeovers. It's an honorable position, perhaps, but it endangers the future of domestic businesses as long as corporations in other EU countries are playing by different rules.

Hochtief CEO Herbert Lütkestratkötter hasn't given up the fight. On Monday, the Hochtief supervisory board's ad hoc committee filed a special application with Australia's Takeover Panel in Sydney, asking that authority to certify that ACS must make a takeover bid not only to Hochtief's shareholders, but also to the company's Australian subsidy Leighton. This move would make ACS's planned takeover of Hochtief considerably more expensive, as it would require the Spanish company to obtain authorization from its shareholders for a larger capital increase. It's doubtful whether it would succeed in getting that.

Perhaps the authorities in Australia will step in to help, or perhaps it will be the Emir of Qatar. Someone, somewhere, will make a decision about Hochtief's future. It just won't be anyone in Berlin.