This week wasn't just a bad one for the Volkswagen concern. The German government is also happy that it's over. Berlin had painstakingly developed a damage control strategy in an effort to prevent the VW scandal from damaging the reputation of German industry as a whole. Top advisors to Foreign Minister Frank-Walter Steinmeier had even written a confidential letter to German diplomats around the world, providing guidelines for how they should go about defending "the Germany brand." "The emissions scandal should be presented as a singular occurrence," they wrote. "External communication" should focus "to the extent possible on preventing VW and the 'Made in Germany' brand from being connected."

But then Monday arrived and the announcement by the Environmental Protection Agency in the United States that "VW has once again failed its obligation to comply with the law that protects clean air for all Americans." In addition to the 11 million diesel vehicles whose emissions values were manipulated, additional models are also thought to have been outfitted with illegal software to cheat on emissions compliance tests, including the popular SUV Cayenne. That vehicle is manufactured by Porsche, the company that VW's new CEO, Matthias Müller, used to lead before being hired to replace Martin Winterkorn, who was ousted when the VW scandal first broke.

Then Tuesday arrived, and along with it the admission from Müller that VW had deceived even more of its customers. The fuel consumption claims for more than 800,000 vehicles were manipulated, with the specified average mileage not even achievable in testing, much less in real-world conditions. The new scandal affects models carrying the company's own environmental seal-of-excellence known as BlueMotion, a label reserved for "the most fuel efficient cars of their class," as the company itself claims.

It has now become clear that such claims are a fraudulent lie. And it shows that this scandal may continue to broaden before VW manages to get it under control.

Thus far, the "Made in Germany" brand has not been noticeably damaged; German exports are at a record high. But concern is growing at competitors like Mercedes-Benz and BMW that they too may ultimately be affected by the scandal. They believe there is a danger that diesel engines as a whole could fall into disrepute. And without diesel motors, which are relatively efficient, European CO2 emissions reduction targets will not be met.

A combination of astonishment and horror has gripped Volkswagen headquarters, one manager relates. And new legal investigations could be on the horizon. Braunschweig public prosecutor Klaus Ziehe, who has jurisdiction over Volkswagen, says: "Following the new accusations, we are looking at the possibility of opening an additional investigation." The new situation, he says, is not covered by the investigation that was launched in October because of the "obviously new circumstances with the possible involvement of other actors."

Legal experts say that the owners of the 800,000 vehicles with manipulated fuel efficiency values could now demand a conversion. In other words, they would be within their rights to return their vehicles and demand the reimbursement of the purchase price, minus a use fee for the period of ownership.

VW has calculated its possible risk exposure at €2 billion ($2.15 billion), but that may not be enough. Were owners to return even half of the cars affected, the company would likely face costs of between €4 billion and €8 billion -- in addition to the €6.5 billion that has been set aside for the rectification of the problems with the diesel engines.

In the beginning, the company insisted that the emissions problems were caused by "a small group," but it has since become clear that several factions within the concern were engaged in defrauding customers, dealerships and government officials in many countries for years at a time. Those responsible can be found in VW headquarters in Wolfsburg, but they had plenty of help from German government officials in Berlin and EU officials in Brussels.

Politicians, to be sure, tightened CO2 emissions requirements so as to distinguish themselves as climate protectors. But they didn't do anything to ensure that emissions could be efficiently monitored. On the contrary, they tolerate a vast gray area that provides automakers with plenty of room for deceit.

One possibility open to car companies involves the approval of new models. Such approval can take place in any country in the EU, but is then valid across the entire 28-country bloc. That has created competition for business among certification agencies in the EU, a situation which creates a disincentive for agencies to be particularly critical. Next time, after all, a car manufacturer may just take its business elsewhere.

The deception begins with so-called "coast down tests," which involve accelerating a vehicle to a specific speed and then allowing it to roll until it comes to a full stop. The greater the distance, the lower the car's drag coefficient. And when it comes time for emissions testing, a lower drag coefficient results in improved results. Which is why carmakers use all legal means at their disposal to improve their coast down results: They use test roads that are slightly sloped or that have particularly friction-resistant asphalt; they cover the car's front grill to reduce wind resistance; or they greatly increase air pressure in the vehicle's tires.

But for those who consistently seek advantage using legal measures, the step across the line is apparently a short one. It is particularly effective, for example, to mount extra-heavy wheels on the test vehicle, because heavier cars roll further. Doing so is not allowed, but discovering it would involve removing wheels and weighing them, a procedure that is not part of a standard test. The Netherlands testing agency TNO has long promoted the introduction of a requirement to weigh the wheels of test vehicles, but has never made much progress against the European Automobile Manufacturers' Association.

In the US, the system for vehicle approval is structured differently and is apparently more efficient. There, carmakers initially only have to confirm that they conform to legal limits. Later, government agencies perform tests in independent laboratories. And if fraudulent results are found, punishments are harsh.

In Germany, by contrast, a stamp of approval from the Federal Motor Transport Authority for a new model is the end of the story. Carmakers don't have to worry about additional tests, not even should suspicions arise. Germany's Transportation Ministry recently responded to a query from the Green Party by saying that it was aware of a study showing increased nitrogen oxide emissions from diesel vehicles, but it saw "no cause" for additional testing.

"By capitulating to the interests of automakers, the German government is damaging the country's good reputation as a place to do business," says Jürgen Resch, head of the environmental organization Deutsche Umwelthilfe.

"The complicity between the German government and the automobile industry is a voluntary failure of the state and ultimately the cause of the VW scandal," adds Oliver Krischer, transportation expert with the Green Party.

The fact that VW has now admitted to having manipulated the model approval tests of vehicles in its BlueMotion series makes clear the political failure. Which helps explain the alarmed reaction of Transport Minister Alexander Dobrindt, though his demands have thus far not gone beyond the self-evident. Should VW car owners be forced to make vehicle tax back-payments because their cars emit more CO2 than indicated, Dobrindt said, then VW should be liable for those costs.

Away from the cameras, though, the transport minister has been more protective of VW, particularly when it comes to the question as to whether the 200,000 vehicles with falsified emissions values should be taken off the roads. Dobrindt is in favor of simply allowing VW to apply for a new model allowance. Once it is issued, it would simply replace the old one.

New VW CEO Matthias Müller is grateful for any support he can get these days. After just six weeks at the top of Volkswagen, there are some already asking if he is fit for the job, questions that he has no patience for. The Porsche Cayenne's engine, currently suspected of having been manipulated, was developed and produced by Audi and approved in the US; during his term as head of Porsche, Müller had nothing to do with it. The concern's supervisory boards have assured that there is no cause for speculation regarding the role played by Müller. On the contrary, they are quite satisfied with the way he has gone about investigating the emissions scandal. He has been open and transparent, they say, even when doing so has been uncomfortable. "Müller stands for a new beginning," says one supervisory board member.

A Phone Call from the Chancellor

But it is questionable whether the Volkswagen scandal will cause the German government to rethink its cozy relationship with the automobile industry. Just two weeks ago, in fact, Berlin aggressively defended VW's interests in Brussels, as though the emissions sham never happened. At issue was a new testing method whereby vehicle emissions would be tested under real-life conditions on the road rather than just in the laboratory. The automobile industry had long resisted the new method, but as it became apparent that its introduction could no longer be stopped, Berlin turned to a trick: new vehicles will not have to immediately conform to regulatory limits. They will be allowed to exceed the limit by a so-called "discrepancy to conformity" factor.

The government in Berlin had agreed on a factor of 1.4, but on the day before the decisive meeting of the European Commission in Brussels, the German Association of the Automotive Industry (VDA) protested. The association insisted that the factor should be initially set at between 2.5 and 3, which would have allowed vehicles to emit two to three times the legal emissions limit.

In the end, VDA President Matthias Wissmann was able to win over the chancellor. On the morning of the Commission meeting, several of those involved say, Merkel called Commission President Jean-Claude Juncker. At the end of the conversation, the discrepancy to conformity factor had been decided upon: 2.1.

Perhaps, though, that should be seen as progress. The automobile industry, after all, wasn't able to get everything it asked for. 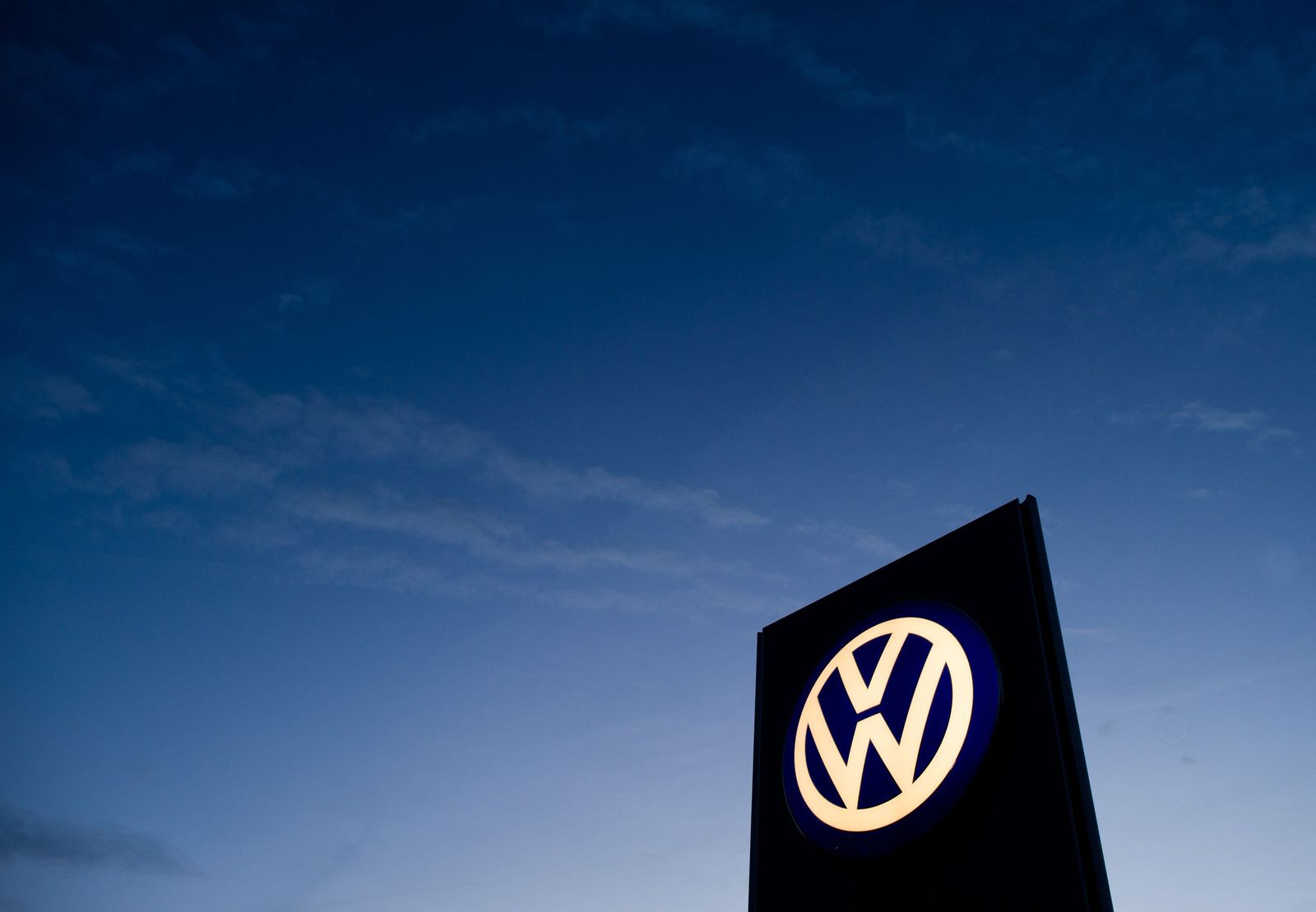 As the Volkswagen scandal widens, German government complicity has become impossible to ignore. 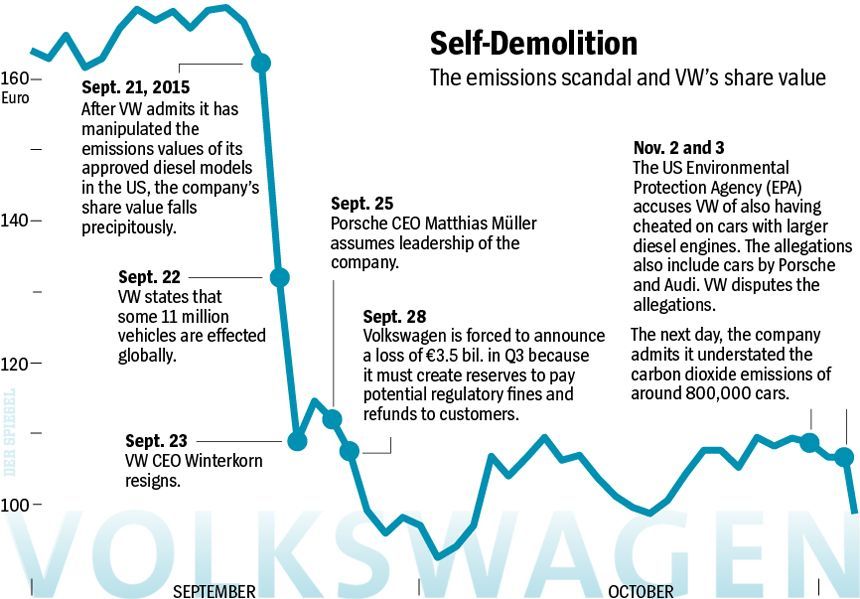