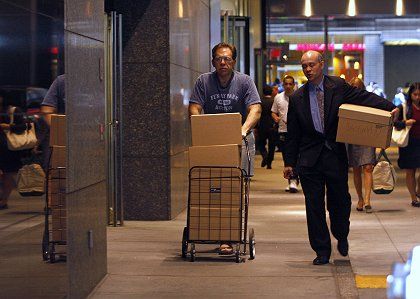 Two men walk out of the Lehman Brothers building with boxes in New York on Monday. The collapse has also threatened a major fund in Germany.

World markets Wednesday briefly reversed their slides after a sudden bailout by the United States Federal Reserve of the American insurance giant American International Group (AIG) -- which on Tuesday joined Lehman Brothers and Merrill Lynch in a brutal series of Wall Street failures. But by late morning, Germany's blue chip DAX index was headed south again, with investors doubting that the worst is over.

The Nikkei index in Tokyo was up 1.2 percent on Wednesday morning on the AIG news, while Britain's FTSE 100 dropped 1 percent and Germany's DAX index had fallen 0.4 percent by mid-morning after a brief opening rally.

The Federal Reserve said it would offer an $85 billion loan, take 79.9 percent of AIG's stock and replace its management because "a disorderly failure of AIG could add to already significant levels of financial market fragility," according to a statement released by the central bank.

The AIG takeover was another sign that the US government was willing to spend money to save Wall Street firms rather than spooking world markets by letting them fail. "It was a tranquilizer pill for the market," capital-market expert Robert Halver of Baader Bank told the German wire service DPA.

Halver agreed with other experts who said salvaging AIG was a crucial move. "But that news alone is not enough to actively push up the market," Takashi Kamiya, chief economist at T&D Asset Management, told Reuters. "Further market gains will be tough because investors have become risk-averse due to the credit squeeze."

Stock markets have been sliding worldwide since Bank of America announced a deal to buy Merrill Lynch and Lehman Brothers filed for Chapter 11 bankruptcy protection on Monday.

The Lehman failure is said to be the largest bankruptcy in history and it could also have massive implications for Germany. Lehman Brothers' German subsidiary is a member of the Deposit Guarantee Fund of the Association of German Banks (BdB); and the fund, backed by Germany's biggest banks, could be required to cover up to €6 billion of Lehman's liabilities, according to financial daily Handelsblatt. The fund's liability can only be reduced if parts of Lehman's German subsidiary are sold -- and that could present a serious problem.

According to Germany's Finance Ministry, the Deposit Guarantee Fund has only $4.6 billion at its disposal. BdB would not comment on questions from a Handelsblatt reporter about the scope of the fund's liabilities. Experts noted, however, that if the amount reaches €6 billion it would be the largest single loss in the history of a German fund, dwarfing the €1.3 billion bailout of Schmidt Bank in 2002.

On Tuesday, news emerged that the German state lender KfW had transferred €300 million to Lehman Brothers the day it filed for bankruptcy in an erroneous swap -- a transaction in which two parties agree to exchange one stream of cash flows against another, according to Reuters. The transfer exposed the government lender to €300 million in losses, triggering criticism from the Finance Ministry, which demanded a "swift explanation of such a technical failure."

But other German companies viewed Monday's development and the announcement of the AIG bailout as an opportunity to step into the lucrative American financial market -- just as the British bank Barclays announced a deal to buy Lehman Brothers' core businesses for what the New York Times described as a "fire-sale price" of $1.75 billion.

AIG provides insurance not just for consumers but also for large Wall Street investment firms against just the sort of credit crisis that has brought Lehman and Merrill to their knees. German insurance giants like Allianz and Munich Re are openly on the lookout for Lehman-style bargains.

"I don't think you can reach satisfactory growth numbers if you are not a substantial player in the US," said Michael Diekmann, Chairman of the Board of Management at Allianz, over a week ago to the Financial Times -- even before AIG collapsed. Given a strong euro and a relatively weak dollar, he said, "and from what I see of some of our competitors in the US, this is not a bad time to look at the US market."