SPIEGEL: Mr. Baker, you have five young daughters. Would you advise them to go into journalism today?

Baker: Yes I would. There are not many jobs with a higher calling. Journalism has a great future and an incredible value for society.

SPIEGEL: Circulation and advertising revenue have been shrinking for years now, especially in the United States. Apparently it is only billionaires who seem to be attracted by the newspaper business these days: Jeff Bezos of Amazon bought the Washington Post, investor John Henry snagged the Boston Globe and Warren Buffett is acquiring regional papers by the dozen.

Baker: Their investments demonstrate that journalism is not a dying business! They clearly see that there is value in news and that the future will be digital. No newspaper will survive the transition from print to online in its traditional form -- and some won't survive at all. That does not mean that journalism itself is doomed. On the contrary: There has never been a stronger need for reliable information. An internet pioneer like Jeff Bezos is right in believing that there is an opportunity to earn money here.

SPIEGEL: Are you sure the new press barons are not simply hunting for trophies, for influence or a better image?

Baker: I do not know the motivations of Bezos or Buffet, of course. But I listen to them and I believe what they say: That they are not doing this for vanity reasons or because it gives them any non-financial pleasure.

SPIEGEL: How do these new press owners differ from Rupert Murdoch, who bought the Wall Street Journal seven years ago from the Bancroft family?

Baker: That's simple: Rupert Murdoch has invested heavily in journalism for over 60 years, not only for one year and he has a proven track record of success in the business. It's a continuous commitment.

SPIEGEL: Last year he sold 33 regional papers, arguing they would not fit into the company's strategy anymore. How long will the WSJ fit into News Corp's strategy? After all, Murdoch has already split off the more successful TV and film business.

Baker: Rupert Murdoch himself has frequently and publicly said that Dow Jones and the WSJ are absolutely central to the company. I would even argue we are the spine of this $9 billion company, by virtue of our size and our global reach.

SPIEGEL: How has Rupert Murdoch changed the WSJ ?

Baker: We are a better newspaper. We've expanded the reach of the WSJ, we've added coverage of politics, sports, entertainment, fashion and culture. We added new sections and a magazine -- while maintaining our core strength in business and financial coverage. Our subscription base is growing. At the same time we became more news focused, more immediate, we made our stories livelier and more accessible. We have fewer of the very, very long-form stories you would traditionally find in the WSJ.

SPIEGEL: Critics would say this is one of the reasons why the WSJ has only won two Pulitzer prizes since Murdoch took over seven years ago.

Baker: I don't judge the success of the Journal by the number of Pulitzer prizes. It doesn't say anything about the quality of our journalism.

SPIEGEL: Thanks to Jeff Bezos the Washington Post has deeper pockets to invest. Does that make you nervous?

Baker: No, it's good for us that successful pioneers of the digital age like Bezos demonstrate that they believe in journalism. Perhaps it will convince some of those people in the investment community that have already written off the newspaper business that there may be a good reason to invest. We should all be grateful to Bezos for this. It sounds like a cliché, but competition is good, it keeps us on our toes, it makes our reporters even more ambitious.

SPIEGEL: Internet publications like Business Insider, Politico or The Intercept -- recently launched by eBay founder and billionaire Pierre Omidyar -- all break exclusive stories of impact and make it harder for you to preserve the status the WSJ has had as a must-read newspaper in the past.

Baker: Some of them are doing some good stories, but so far I have not seen from any of those the quality of journalism that you get every day, every minute in the WSJ. Some of them have a lot of traffic, but we have more than 2 million people who pay in order to read the WSJ in print or online every day. This is the kind of audience that advertisers are actually most interested in.

SPIEGEL: US newspapers have lost more than 50 percent of their advertising revenue in the last six years. Advertisers have become increasingly assertive. The latest trend is called "native advertising" -- ads that resemble newspaper articles. Six months ago you said this was a "Faustian pact," but now the WSJ is offering its advertisers exactly this. Why are you entering into that pact?

Baker: What I said was that there is a risk: that in the search for new revenues we blur the line between advertising and journalism. If we did so, we would lose credibility and readers.

SPIEGEL: But "native advertising" as such is based on blurring the line. Don't you fear that this is a slippery slope?

Baker: No, as long as there is no doubt for the reader as to whether something is advertising or information provided by the WSJ. This is exactly how we handle it and I don't think that anybody could possibly argue that we blur the distinction.

SPIEGEL: The Los Angeles Times has recently made it into the headlines with the first robot writing a short article about an earthquake. What chances do you see for robo-journalism in business reporting?

Baker: Some scientists are predicting a time when artificial intelligence becomes more intelligent than human intelligence. That is a fascinating idea. Artificial intelligence is progressing at a pace that makes all kind of things possible and of course very basic information and routine data can be conveyed robotically. But I don't think that in the near future we will be able to substitute the judgment and the knowledge of a human being in journalism. 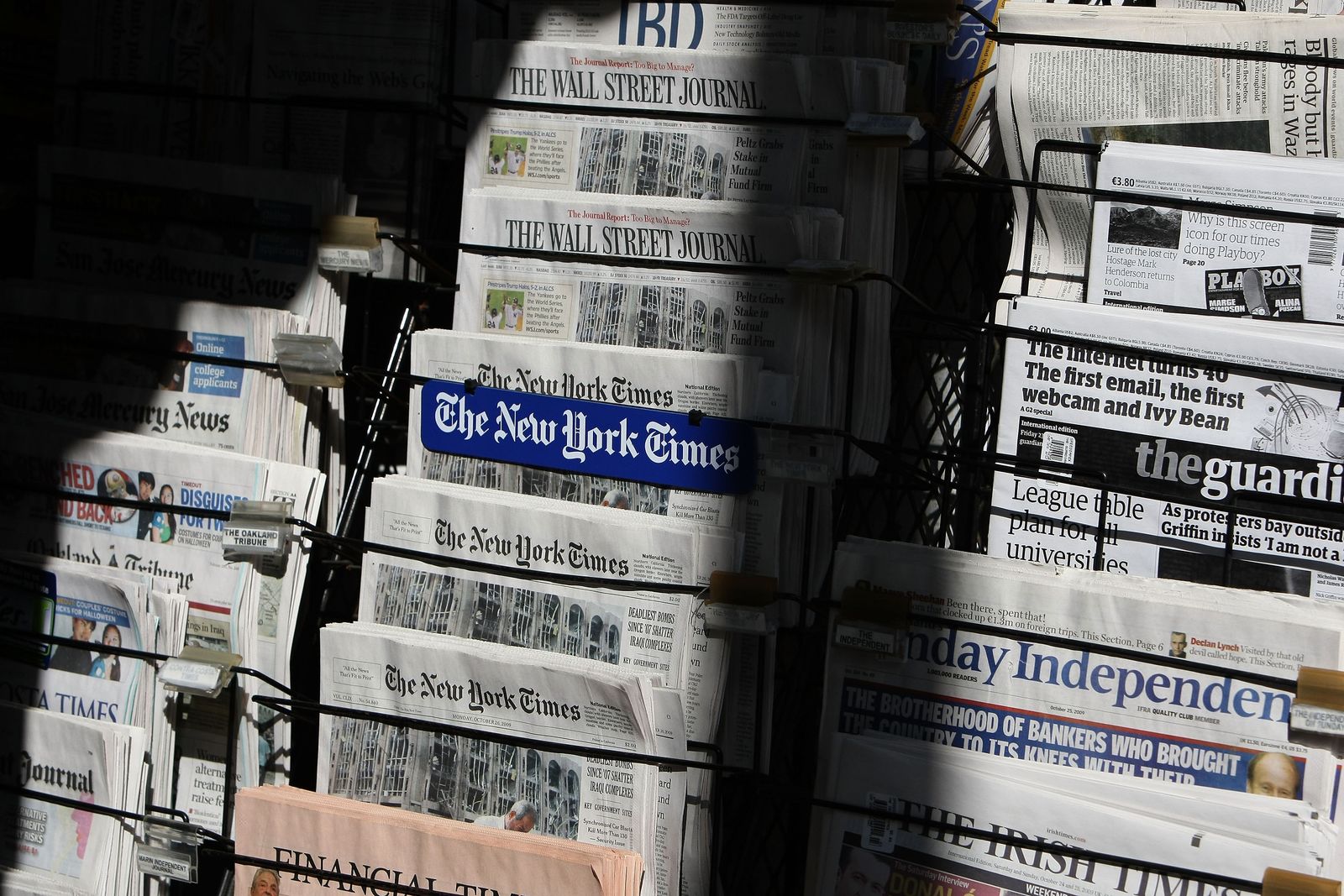 Newspaper circulation and advertising revenues have been shrinking for years in the United States, but Wall Street Journal editor Gerard Baker is optimistic: "We should be thankful to Bezos."