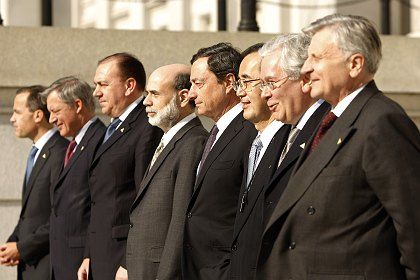 Ben Bernanke at the G7 meeting of central bank governors over the weekend.

Alan Greenspan and Ben Bernanke have more in common with the big cat entertainers Siegfried & Roy than any of us can be comfortable with.

The Las Vegas magicians call themselves "Masters of the Impossible" and have been fascinating audiences for decades by getting snow-white tigers to leap through burning rings.

The legendary Federal Reserve Chairman and his successor were equally adept at fascinating their audiences -- with a policy of miraculous monetary growth that gave America one of the longest periods of economic expansion in modern times. Many saw them as "Masters of the Universe." It seemed as if the central bankers had tamed predatory capitalism with their constant interest rate cuts.

Siegfried & Roy at times seemed at one with their cats, until the day everything went out of control. A tiger bit Roy in the neck during a show and looked as though it were about to devour him alive.

Greenspan and Bernanke too have lost their magic touch, and their image has been shredded by the real estate crisis and the dollar slide. The ravages of the financial markets aren't doing them any personal harm. But devalued stocks, bad mortgage loans and the diving dollar are damaging millions of small investors and savers.

It's as if the tiger has leapt of the stage and is mauling the audience. We can't blame wild cats or financial markets for being ruthless. It's in their nature to be brutal. Their unmistakeable message is: you can take things this far and no further.

In the case of the real estate crisis which reached the banks and is now unsettling the stock markets, the markets are now showing what G7 finance ministers and central bank governors meeting last weekend in Washington for their annual spring get-together declined yet again to admit publicly: Americans must change their lives -- or it will be changed for them by force.

American Way of Life Under Threat

The credit-financed consumer boom of recent years is coming to a painful end. Today's American Way of Life has no chance of surviving the coming years undamaged. The virus will continue to ravage its way through the financial system.

The property crisis is likely to spread to credit card providers soon and will then probably infect car manufacturers, furniture makers and all the other firms that owe their sales increases to the growth in credit finance. "The virus will keep on infecting the system," one management board member from a large bank said, requesting anonymity in return for the candour of his analysis.

His argument is that banks that grant mortgages to home buyers virtually unable to pay their bills are unlikely to be especially scrutinizing when it comes to lending cash to the buyers of fridges, cars and furniture. Indeed, a furniture store in Miami recently tried to lure consumers with the following offer: buy now, pay your first credit installment in three years, and no need for a down-payment.

The credit-financed way of life is typical of the US these days. Many people resort to credit to plug the gap between the lifestyle they have become accustomed to and their declining wages.

Dulling the Pain With Credit

The borrowed cash is like an anaesthetic against the painful impact of globalisation. Private household debt has been growing by $4 billion each business day for years.

All this wouldn't be so bad if the US economy were at least doing well in foreign markets. But it isn't, and hasn't been for a long time. Despite the depreciation of the dollar, which makes imports into the US far more expensive while making US exports cheaper in foreign markets, US manufacturers are finding it hard to sell their products.

Contrary to forecasts by both the Federal Reserve and the Treasury, the trade deficit has continued to grow, by 6 percent in February alone. America imported $62 billion worth of goods more than they exported in February, including a disturbingly large number of cars, computers and pharmaceutical products. Try as they might, most private households in America can't keep up this consumer miracle. The savings behavior of many Americans means that many of them now live from hand to mouth.

But Bernanke is doing nothing to dampen this hunger for credit. The former advisor to President George W. Bush is even trying to whip up credit-financed consumption by lowering interest rates. This is helping to fuel inflation because the monetary growth isn't being matched by growth in real economic output. Inflation in the US currently stands at 4 percent.

It's a paradox. The private commercial banks which have just had to make billions of dollars in write downs have become more cautious. They're scared of further risks. The management resignations at Citigroup and Bear Stearns have had a sobering impact.

Meanwhile the Federal Reserve is urging the banks to go on taking risks. It has been injecting cash into the banking system for the past half-year while urging bank CEOs in confidential chats to offer more credit. The aim is to keep on financing consumer spending and even to stimulate it further -- for reasons of patriotism.

But because there is method in this madness, the meeting of mighty central bank governors and finance ministers in Washington over the weekend remained silent about it, at least officially. Outside the meeting rooms, though, there were murmurings about the poisoned legacy of Alan Greenspan and Bernanke's irresponsible behavior.

One participant told me: "There's an unwritten code of honor that says central bank governors should refrain from criticizing each other." Not least out of respect for the independence of central banks.

But the US is unlikely to realize the error of its ways on its own. "The Americans will always do the right thing," British Prime Minister Winston Churchill once said, "after they've exhausted all the alternatives."

Central bankers and tiger tamers have something else in common -- obstinacy. Roy has recovered from his wounds and wants to return to the stage in Las Vegas. "The magic is back," came the defiant announcement.

Not that he ever complained about getting false praise.