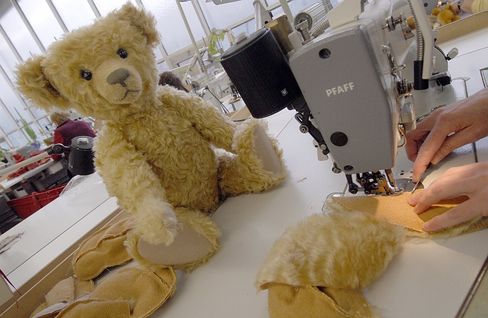 Despite massive training efforts, German premium stuffed animal-maker Steiff was unable to yield the quality it demanded from its Chinese plant.

Citing fast-climbing labor costs and pesky production quality problems, a growing number of German companies are doing an about face and pulling their manufacturing operations out of China. Some are searching for countries with lower wages while others are returning production to Germany.

The Association of German Engineers (VDI) estimates that one in five of the approximately 1,600 German companies with presences in China is planning to pull out of the market, the Tagesspiegel am Sonntag newspaper reported. "Many, many firms are naïve when they enter into the Chinese market and don't even think about the fact that wages are increasing there," VDI spokesman Sven Renkel told the newspaper.

Rising energy costs, stricter environmental rules, the elimination of many tax incentives, a dearth of skilled workers and the increasing strength of the yuan against the dollar have all pushed production costs up in China. In addition, the country's 8-percent inflation rate has also driven up wages in the past year by as much as 20 percent, Harald Kayer, a partner at the consulting firm PricewaterhouseCoopers (PWC), told the paper. For some companies and industries, China is already getting to be too expensive. They're now looking to other lower-wage countries, like Bangladesh, India or Kazakhstan, where production is cheaper, or they're bringing manufacturing back to Germany, he said.

Chinese companies, too, are increasingly outsourcing production abroad, Eddy Henning, the head of corporate banking at Deutsche Bank in Beijing, told the newspaper. "Someone who just wants to produce T-shirts is more likely to go to Vietnam or Africa," he said. For investors from Europe, Romania and Bulgaria are also competitive with China when it comes to production.

According to Hans Röhm of the consulting firm Deloitte, the companies that are most likely to return to Germany are those that outsourced production out of cost considerations -- including the consumer goods industry and textiles, which both produce in mass quantities.

But manufacturers of high-quality goods are also looking at China with a more critical eye -- at least in the longterm. A dip in quality for these companies could damage their reputation. "That's why we're advising a lot of our customers to consider production in Germany," Röhm told the paper.

Four years ago, Steiff, a world-famous German company that makes high-quality teddy bears, moved part of its production to China. In early July, though, the company announced it would return all manufacturing to Germany.

"For premium products, China is just incalculable," Steiff CEO Martin Frenchen told the Stuttgarter Nachrichten newspaper in July. He said it took six months to train workers to produce the teddy bears' complicated stitching and to meet the company's standards for quality. "By then you might have already lost them to an automobile factory next door that pays more," he added. Despite the company's arduous efforts to produce high quality products in China, Steiff executives weren't satisfied with the end result, Frechen said.

Following a major scandal last year in which researchers discovered that some toys made in China were coated in toxic lead paint, the public's faith in production in the country was shaken, and Steiff decided to end its production in Asia.