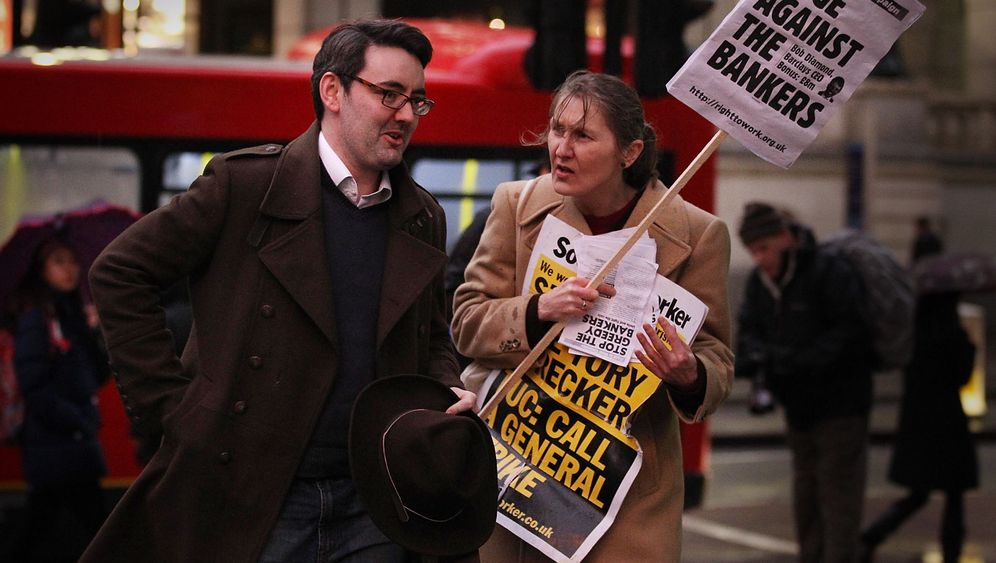 Photo Gallery: The Attack on the Banking Bonuses

The City of London is the heart of the European financial industry, and the British are willing to resort to every shady trick possible to ensure that it remains that way.

This was in full evidence, once again, near the end of the negotiations with other Europeans over the amounts of bonuses for bankers. The British said that they could agree to a compensation cap if the principle of regionalism were respected. This means that the foreign subsidiaries of European banks would be able to continue setting their bonuses as they see fit.

The other Europeans, quickly realizing this as a potential recipe for abuse, rejected the British proposal. Finally, the rest of Europe agreed on a bonus rule and launched a set of deeply symbolic regulations with far-reaching consequences. The European Parliament will likely enact the package in April, and it is then expected to go into effect in January 2014.

"If we had had rules like this six years ago, the Lehman case wouldn't have happened, or at least not with such devastating consequences," European Commissioner Michel Barnier said momentously. Of course, the Frenchman wasn't just referring to the cap on bonuses, but also to the other regulations included in the package on how much capital and liquid funds banks must keep in reserve in the future.

The cap on bonuses, which is intended to prevent excessive compensation in the future, is good for public morale. But other rules are more important in placing the financial industry on a more solid footing.

When Lehman Brothers imploded in 2008, politicians and economists identified countless abuses that facilitated the crash of that and other banks: not enough capital to absorb losses, poor risk management and business models that were designed for eternally fair weather days in the financial markets.

But spectacular bonuses that were based solely on short-term profits were also a core problem. The system tempted dealers to make risky bets. If the bets worked out, they stood to rake in millions. And if the speculation led to losses down the road, the losses ended up with the bank and, when the bank needed bailing out, with taxpayers.

This is why governments soon imposed new renumeration models, under which lenders are required to stretch bonuses across multiple years and, in the event of subsequent losses, cancel them again. But now the EU wants to put a cap on compensation levels, so that, generally, bankers' bonuses can no longer exceed their fixed salaries in the future.

Only Fraction of Bankers Affected

The financial industry is outraged, while critics of the banks are delighted. In the end, however, the cap on bonuses isn't likely to make much of a difference -- or cause much damage, either. It only affects a fraction of bankers, and it can also be circumvented. In the best of cases, it will be a wake-up call for those shareholders who have stood back while some bankers helped themselves.

The Economic and Monetary Affairs Committee of the European Parliament, which plays a leading role on this issue, adopted a resolution last May to limit variable bonuses to the equivalent of one year's salary. All factions, from left to right, favored more or less strict regulations.

Many parliamentarians are under pressure from their voters to finally do something about the banks. And nothing fuels public anger more than the many reports about bankers who, even during the crisis of their own making, earned salaries many times higher than what is seen as normal. "The financial crisis has given many of our positions majority appeal," says Sven Giegold, a Green Party member of the European Parliament and one of the founding members of Attac Germany, a coalition for action that is critical of globalization.

There is strength in this much unity. Members of the European Parliament repeatedly blocked compromises being proposed by the lead negotiators of EU countries that were under pressure from the British, who were determined to protect London investment banks. The German government supported Great Britain so as not to alienate London.

But then, the week before last, Germany changed sides. The German government wanted a compromise, and that's what it got. Under the plan, it would take a 75-percent majority in a shareholders' meeting to increase the bonuses paid to their bankers to up to two times their salaries. German Finance Minister Wolfgang Schäuble said that he would support the measure at a meeting of finance ministers in Brussels this week.

Schäuble and his EU counterparts are being met with outrage from the financial industry. "Employee compensation for banks, including bonuses, should be in the hands of shareholders," says American financial investor Christopher Flowers. An influential shareholder in many financial groups, Flowers became familiar to Germans when he acquired stakes in failed bank Hypo Real Estate and HSH Nordbank.

Flowers predicts that in the long run European banks will be unable to compete with their American competitors for talented personnel. "The new legislation reinforces this trend," he says, expressing the kind of criticism top executives of German banks are only willing to mention under their breath.

But do European banks truly risk losing their competitiveness?

Most German lenders are only marginally affected. If any German bank stood to be significantly affected by the legislation, it would be Deutsche Bank, which chooses not to comment. About 500 Deutsche Bank employees, or less than 1 percent of the total workforce, regularly earn bonuses greater than their fixed salaries. "The overwhelming majority of employees find this problem amusing," says an employee representative. Some 99 percent of Deutsche Bank employees receive bonuses equal to no more than a third of their fixed salaries. In fact, usually bonuses are little more than symbolic sums.

The rule mainly targets investment bankers, such as dealers. They could certainly move down the street from Deutsche Bank in New York to one of its competitors.

Whether this will happen on a large scale is questionable. "The affected banks will pay higher fixed salaries to people they want to keep," says a former Frankfurt bank executive. He also notes that ample pension commitments will also make a comeback if investment bankers can no longer rely on millions in bonus payments to safeguard their retirement.

In recent years, when there was growing public pressure against large bonuses, many banks raised their fixed salaries, as figures compiled by the London-based Center for Economics and Business Research (CEBR) show. Fixed salary components also went up recently at Deutsche Bank.

Critics fear that this could in fact increase investment bankers' openness to risk. "It's absurd that the employer should be legally compelled to pay large portions of previously variable compensation in fixed form and in advance, without it being based on performance," says Andreas Halin of the human resources consulting firm GlobalMind. "It's the opposite of risk management."

But that doesn't have to happen. The plan could, in fact, leave the banks some latitude to continue paying high variable compensation. Bonuses that are paid in stocks or options and are stretched across at least five years could be exempted from the bonus cap.

Nevertheless, experts expect that bankers and shareholders will bridle against the EU plans. "I think it's likely that once it's been translated into German law, there will be constitutional challenges against the bonus rule," says Christian Hoefs, an expert on labor law with the law firm of Hengeler Mueller. Employees could attack the rule as an encroachment on the occupational freedom established in Article 12 of the German constitution, while shareholders could see their rights as owners curtailed and cite Article 14.

But would the EU plans even have the desired positive effect?

"Bonus compensation created false incentives that were dangerous to the economy as a whole," explains Christopher Kaserer, a banking expert at the Technical University of Munich. But, he adds, these systems were only possible because almost every bank could rely on a government guarantee, since governments would rescue any failing bank to protect the deposits of their citizens. "Because they knew that, the owners also approved of the dubious compensation models," says Kaserer.

So far none of this has changed. Banks can still depend on the government to jump in if necessary. This suggests that it is more important than a bonus cap to ensure that banks, in the event of a crisis, can be liquidated quickly and without jeopardizing the financial system and the deposits of savers. If shareholders had to fear the possibility of losing their money, they would probably take a closer look at the banks' compensation systems.

While the banks remain at odds with the new bonus rules, lawmakers are already working on harsh interventions into compensation policy. They could make it unattractive for bankers to flee from restrictive bonus requirements. Green Party lawmaker Giegold also wants to see a strict cap on bonuses for fund managers. "I can imagine a cap like the one for banks," says Giegold, who is also the European Parliament rapporteur for the regulation on amendment of the fund guideline.

Giegold also wants to eliminate the generous profit-sharing payments that some investment companies siphon off from customer gains. This would primarily affect foreign funds. German financial regulator BaFin is also critical of profit-sharing in the investment fund economy and, beginning this summer, will strongly restrict use of the practice in Germany.