On Thursday evening, at Audi's 100 year anniversary celebration, Wendelin Wiedeking seemed perfectly at ease. "I am happy as chairman and feel completely contented in the role" said the then-Porsche CEO. However, according to information obtained by SPIEGEL, the families who own Porsche have decided to part ways with the chief executive, who is largely blamed for Porsche's bungled takeover of VW. The terms of his departure are currently being negotiated. 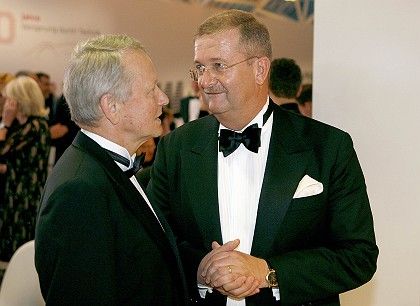 In happier times: Wendelin Wiedeking (R) talking to Wolfgang Porsche before rumours he was to be ousted began to surface.

And the family has already found a successor: Porsche's current head of production, Michael Macht, is set to lead the sports car firm.

The 48-year-old is reknowned in the industry as a highly-qualified production expert who, during his time at Porsche, attained efficiency targets every year. Besides Macht, the board considered no other candidates to succeed Wiedeking.

But it is still unclear who will take over Wiedeking's role as chairman of parent company Porsche Automobile Holding. No matter what happens, the holding company is set to lose ground. Following the sale of Porsche AG to Volkswagen, it would only be responsible for the shares of the Porsche and Piech families.

This decision ends months of wrangling after VW's takeover of Porsche. The luxury sports car company was looking for a way to pay off the €9 billion ($12.3 billion) in debt it incurred in its audacious bid to take over the much larger Volkswagen. Since then the two intertwined companies have been locked in a power struggle to see which company eventually dominates. Desperately seeking new sources of financing, Wiedeking's management favored the idea of bringing the Emirate of Qatar on board as an investor. At the same time there was an offer from the chairman of the supervisory board at Volkswagen, Ferdinand Piech, on the table -- which, if it was accepted, would see the Wolfsburg company holding almost 50 percent of the sports car firm. Porsche has so far firmly rejected this offer.

In order to reach a decision, the Porsche and Piech families had to settle on a future strategy. Porsche's supervisory board chairman, Wolfgang Porsche, wants to preserve the autonomy of the sports car manufacturer.

Rumors that Wiedeking's future at Porsche was in doubt have been intensifying in recent days. According to respected German newspaper, the Süddeutsche Zeitung, he recently received a visit from two representatives of the family owners, including Wolfgang Porsche. They are said to have made it clear to him that he did not have a future with the company. Wiedeking allegedly appealed for more time to think.

Late this week though, on July 16, the Financial Times Deutschland was reporting that Wiedeking was preparing to step down. The newspaper claimed that he had already hired renowned labor lawyer, Jobst-Hubertus Bauer from the Stuttgart law firm of Gleiss Lutz.