If anyone knows how to impress someone, it's Sergio Marchionne. The head of the Turin-based Fiat, a Canadian citizen with Italian roots, has a penchant for arriving at the wheel of a Maserati, wears sweaters instead of ties and can cite the figures for his business plans on the spur of the moment instead of having to refer to thick corporate presentations. 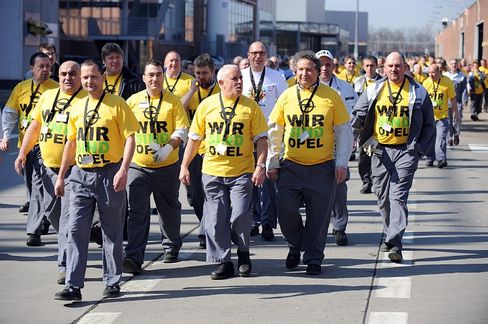 "We Are Opel": Workers at the German carmaker are opposed to a takeover by Fiat, claiming a partnership with the Italian company in the past was unsuccessful.

Marchionne made a strong impression when he met with German officials in Berlin last Monday. Members of German Foreign Minister Frank-Walter Steinmeier's staff were impressed by his confidence, while their counterparts in the Economics Ministry characterized the Fiat chief executive as "a tough negotiator, and not some self-satisfying dandy."

Marchionne's campaign of self-promotion brings the months of grappling over the future of carmaker Opel into a decisive phase. For the first time, the company's 26,000 employees can look forward to prospects other than the foreseeable bankruptcy of Opel's parent, General Motors, in late May. In fact, Fiat is not Opel's only potential buyer.

Both Fiat and the Austrian-Canadian auto parts manufacturer Magna International are interested in Opel. Last week, Magna founder Frank Stronach announced that his firm is seeking to buy a 20-percent stake in Opel as part of a consortium with two Russian companies: carmaker GAZ and the government-controlled bank Sberbank.

Magna is developing takeover plans that will be presented to the government in Berlin soon, while secret talks are currently underway between Magna representatives and executives from Opel's parent, General Motors.

The debate is also politically charged. Even though the conservative Christian Democratic Union (CDU) and the center-left Social Democratic Party (SPD) insist that they have not made any decisions yet, each of the two camps is believed to be leaning toward one of the two potential buyers -- the CDU toward Fiat and the SPD toward Magna.

These preferences are partly a reflection of the individuals involved. Former Chancellor Gerhard Schröder (SPD) is pushing the Magna option to the SPD's candidate for the chancellorship in the September elections, current Foreign Minister Frank-Walter Steinmeier. Munich management consultant Roland Berger, who plays a role in the Fiat camp, has a traditionally strong relationship with the conservative Christian Social Union (CSU), the CDU's Bavarian sister party and the party of German Economics Minister Karl-Theodor zu Guttenberg.

GM has, in fact, hired Berger to serve as its contact for potential buyers of Opel. But Berger is a member of the Fiat supervisory board, a mandate he has given up temporarily. He also serves on the supervisory board of WMP Eurocom, a Berlin PR agency that does lobbying work for Fiat in the German capital. Finally, Roland Berger Strategy Consultants, the agile 71-year-old's consulting company, is helping GM Europe with its restructuring plan, as well as having drawn up the takeover plan for Fiat, dubbed "Project Phoenix".

Marchionne presented the ambitious, 46-page plan to his Berlin counterparts early last week. The group emerging from the merger would be Europe's second-largest automaker next to Volkswagen. And when Fiat's plan to acquire a stake in Chrysler materializes, the resulting group would become the world's second-largest car company next to Toyota. In a section titled "Vision," the plan lists as one of its goals "surviving as one of five or six remaining providers in the global automobile market."

Under the Berger plan, the Fiat-Opel merger would produce annual cost savings of €1.4 billion ($1.04 billion). Six final assembly plants would have to be closed, but none would be in Germany. Downsizing would spell the loss of 10,000 jobs across Europe. One source of conflict was the future of an Opel plant in the southwestern German city of Kaiserslautern, where engines, transmissions and sheet metal parts are manufactured.

According to the plan, the Kaiserslautern plant would be shut down. In conversations with Guttenberg, Marchionne stated several times that the factory had no future. But when the minister disclosed the plan to the public after the meeting, the Fiat chief executive backpedaled, insisting that it had all been a misunderstanding and that only portions of production in Kaiserslautern would be shut down.

Marchionne will need government assistance to execute his ambitious plan. According to the Phoenix document, €7 billion ($9.4 billion) in government loan guarantees will be required for the merger. The loan guarantees would expire after no more than five years. 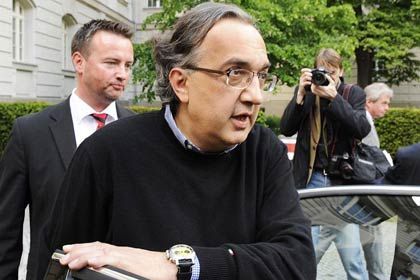 The Fiat chief executive proved to be a flexible negotiator. When asked whether his funding requirements were flexible, Marchionne responded that €5 billion ($6.7 billion) might be enough.

Another enticement for the Germans is that the new holding company, which would include Fiat, Opel and Chrysler, would have its headquarters in two places, Turin and Frankfurt.

After the meetings, the Italian executive appeared to be satisfied with his performance and its impact. The merger of Fiat and Opel would be a "match made in heaven," he said, using the same phrase former Daimler CEO Jürgen Schrempp once used to describe the merger of Daimler and Chrysler -- which failed miserably.

Just as Schrempp was at the time, Marchionne is inspired by the idea of creating a global corporation. Now that the Italians have already received approval for their investment in Chrysler, a merger with Opel would create an Italian-German-American colossus with the capacity to produce 6.4 million cars.

Acting out of experience, management and the works council at Opel headquarters in Rüsselsheim near Frankfurt rejected the offer. Opel has already cooperated with Fiat once before, as part of a partnership that lasted six years. "We delivered three platforms, but all we got in return was one engine," a GM manager complains. He fears that Fiat, in a repeat of its past performance, will simply cannibalize Opel technology without contributing anything of its own.

Financially weak Fiat is not exactly seen in the industry as a technology leader. The Italians would undoubtedly profit from an investment in Opel. But Opel executives fear that the Opel plants would bear the brunt of the restructuring that would inevitably follow a merger.

What makes them especially apprehensive is the fact that although Marchionne has met with practically every politician capable of exerting influence, he has yet to get together with the management of General Motors Europe. Insiders report that Fiat did not even take the trouble, before Marchionne's appearance in Berlin, to examine the business figures and future scenarios Opel has made available for potential investors to examine at Commerzbank in Frankfurt. Industry experts also doubt that it will be possible to efficiently run a corporation that consists of three companies in need of restructuring, Chrysler, Opel and Fiat.

Fiat's undertaking is also seen with critical eyes in the four German states where Opel currently has its plants. "I would take an extremely cautious approach to this," says Hendrik Hering (SPD), the economics minister of the western German state of Rhineland-Palatinate. "The marriage between Daimler and Chrysler, which has since ended in divorce, shows that size isn't everything." 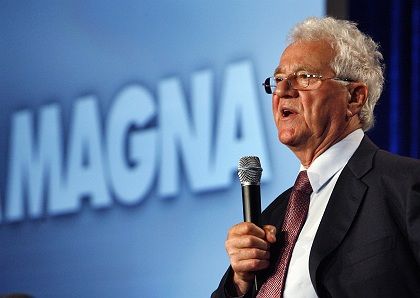 Magna chairman Frank Stronach would like to see his company purchase a 20-percent stake in GM Europe subsidiary Opel.

Even in the other three states with Opel plants, Hesse, North Rhine-Westphalia and Thuringia, all of which have CDU governments, there are suspicions that the highly leveraged automaker from Turin is more interested in gaining access to German government funding than in developing a business model that would be sustainable in the long term. In internal talks, the representatives of these states agree that if funds become scarce despite government loan guarantees, a Fiat-led group would be more likely to shut down German plants than tangle with powerful Italian unions.

Marchionne has apparently recognized that he has more work to do. Last Friday, he paid his respects to the governors of the western German states of Rheinland-Pfalz and Hesse, Kurt Beck (SPD) and Roland Koch (CDU). The Fiat chief executive was charming in promoting his plans, Beck reported after the meetings, and yet Beck's concerns about a proposed merger with Opel were only amplified.

Koch, who was also less than enthusiastic after meeting with Marchionne, asked the Fiat chief executive to submit an offer to Commerzbank.

Opel's second potential buyer, parts supplier Magna, has yet to provide the German government with a detailed plan. Unlike Fiat, the Magna executives contacted their counterparts at Opel first to examine the potential benefits of joint operations.

The consortium could provide Opel with sophisticated Magna technology. The company builds the X3 sports utility vehicle for BMW in the Austrian city of Graz. Magna could use Opel plants that are currently not operating at full capacity to assemble other carmakers' models, a practice it already pursues in its own plants.

The Russian partners in the potential deal would provide Opel with access to the promising Russian market, where vehicle sales could double in a few years, say Opel managers. But these potential buyers of Opel also raise questions. Automaker GAZ faces its own severe crisis, and Russian bank Sberbank will likely lose money this year.

Neither Magna nor Fiat is an altruistic prince charming determined to rescue Opel. And no matter which buyer ends up sealing the deal, factories will have to be closed and jobs cut. Nevertheless, government experts believe that Fiat has the better prospects, especially now that it has succeeded in its bid to acquire a stake in Chrysler. Marchionne's connections at the US Treasury Department, which has de facto control over GM, are considered excellent.

Also, Marchionne probably enjoys a better reputation at GM headquarters than Oleg Deripaska, the Russian oligarch who owns GAZ. "They will pick someone they know from the industry," suspects a German government official. If that happens, says the official, the German government will have no choice but to give its blessing to the deal by providing loan guarantees. In an election year, there could be no other option.