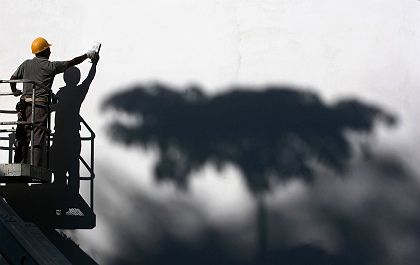 Singapore has climbed up near the top of the World Competitiveness Yearbook rankings.

As rankings go, it may not have the popular appeal of Mr. Blackwell's annual Worst-Dressed List. But business leaders and policymakers pay plenty of attention to the World Competitiveness Yearbook issued every May by the International Institute for Management Development (IMD), a business school in Lausanne, Switzerland. Derived from a battery of data, the competitiveness ranking is a global scorecard for how well nations are preparing themselves for the challenges of the 21st century economy.

The 2007 edition, released on May 10, confirms a few long-term trends. For the 14th time in the yearbook's 19-year history, the US ranked No. 1, thanks to its fundamental economic strength, best-in-class business infrastructure, and highly ranked business efficiency. Following close behind are two Asian tigers, Singapore and Hong Kong, and a half-dozen recurring champs from Northern Europe: Luxembourg, Denmark, Switzerland, Iceland, the Netherlands, and Sweden.

There are also some surprises. In the words of Professor Stéphane Garelli, who heads up the yearbook project for IMD, the big news this year is that emerging economies are closing the gap with the US There's "a big shakeup in economic and business power," Garelli says. In all, some 39 of the 55 countries surveyed either maintained or improved their position vis-à-vis the US, while only 15 declined.

Among the big gainers this year: China, Korea, Russia, and Romania, all of which rose in the rankings and posted faster economic growth than the US. The decliners? Some big European names, including Spain and Finland, as well as Mexico, Brazil, Turkey, and South Africa. "Sooner or later [these nations] will lose their standing in world competitiveness if they do not improve their overall performance," Garelli says.

The study -- the most comprehensive of its kind -- examines 323 criteria, ranging from gross domestic product growth and trade levels to mobile-phone rates and higher education. Roughly two-thirds of the inputs are quantitative, gathered from sources such as the U.N. and the World Bank. The balance are qualitative responses to an annual survey conducted by IMD that examines topics such as business attitudes, regulation, and the environment.

The US continually does so well in the IMD survey thanks to several factors. It ranks No. 1 in the world for its domestic economy, international investment, financial strength, and technology infrastructure. It also comes out on top for "scientific infrastructure," which IMD defines as a blend of higher education, patent protection, R&D investment, and other enablers of innovation.

Looking At Other Studies

But in this year's study, the US skidded five positions in its ranking for "government efficiency," a metric devised from factors such as fiscal soundness, trade freedom, and bureaucracy. Survey respondents marked the US down in areas such as its legal and regulatory framework, independence of the public service from political interference, and even the behavior of customs authorities. Chile, Estonia, and even China all scored better, in aggregate.

To be sure, IMD's isn't the only list that compares countries and their socioeconomic performance. So to shed light on how different studies come up with different conclusions, we've prepared an interactive table that compares this year's IMD rankings with those of a recent study from the World Economic Forum assessing how "network-ready" countries are. There's a remarkable degree of convergence between the two lists, perhaps because both examine similar criteria to assess which countries are laying the groundwork for success in a knowledge-based economy.

But because money isn't everything, we've also included the full results of a study by Adrian White, a researcher at University of Leicester, England, that attempts to answer the ancient, nagging question of which country is the happiest in the world. White's survey and findings have attracted some rebukes. For instance, he places heavy emphasis on social cohesion, quality of health care, and the availability of social services, which some critics see as a free pass for small, socialist-tinged Nordic nations with high tax rates.

With our interactive table, you can decide for yourself. Our own analysis revealed some fascinating patterns. First, there is a sizable group of nations -- mostly from Eastern Europe -- who could be called the "Up-and-Coming Malcontents." Averaging their rankings on IMD's competitiveness study and the WEF's network-readiness survey, Russia, Estonia, Lithuania, Ukraine, and Bulgaria are reasonably well-placed for global businessand gaining ground. But they rank way down on the happiness index.

A trio of three South American countries -- Colombia, Argentina, and Venezuela -- shows up as being a lot happier than they are competitive on the global stage. But perhaps the most remarkable cluster is the "State of Grace" group, including Denmark, Switzerland, Iceland, Canada, Finland, Austria, and Luxembourg, which are all among the best-performing countries yet also manage to be even happier than they are competitive. That's the real recipe for success.