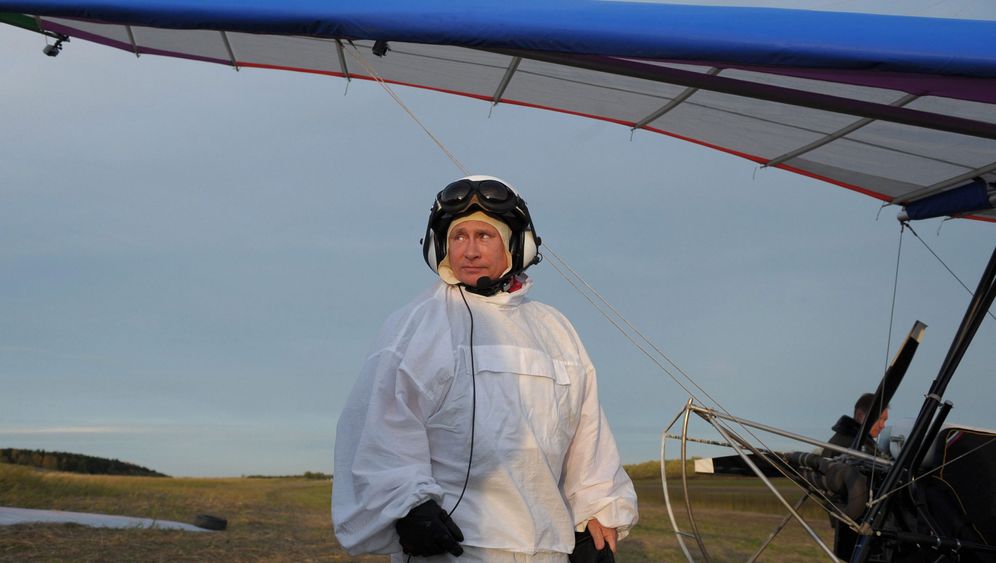 On the swampy outskirts of St. Petersburg, a group of men are killing time playing cards as they guard a prestige project of Russian industrial policy: an abandoned factory building.

Billionaire Mikhail Prokhorov laid the cornerstone for this new neon-orange-painted production plant. The idea is to produce a car that is as hip as Daimler's Smart microcar and sells for the bargain equivalent of €9,000 ($11,700) -- an unbeatable combination that will hopefully make it an export hit.

Prokhorov promised to invest €150 million to cover the engineering costs of the "Yo-mobil," for the Russian letter "ë." This modern, gas-electric hybrid vehicle aims to finally debunk the cliché that Russia is only capable of exporting natural gas, tanks and nuclear power plants.

That would make the Yo-mobil a godsend for Russian President Vladimir Putin, who wants to conquer the global market with mobile phones, tablet computers and aircraft proudly made in Russia. The president has promised to create 25 million new innovation-based, high-tech jobs in this vast country by 2025. In order to achieve this goal, the Kremlin plans to invest 16 trillion rubles (€400 billion/$520 billion), or enough to purchase Toyota, BMW, VW and Daimler at their current market values.

The money would be better-off invested in these foreign carmakers. Indeed, Russian state-owned companies and pro-Kremlin oligarchs are hardly able to advance beyond the stage at which prototypes are presented.

Nevertheless, Putin views cars as a top priority for his country's innovative future. This prompted Prokhorov to have two test vehicles driven to the president's residence in the spring of 2011. But Putin reacted moodily.

Two years ago, Putin drove a canary-yellow Kalina, a supermini car produced by the Russian carmaker Lada, on a publicity tour in Siberia. Just to be on the safe side, Lada had provided him with two replacement vehicles -- and a tow truck.

Perhaps it was this experience that prompted Putin to grumble to Prokhorov about whether "this Yo-mobil won't also fall apart during the trip." But he squeezed behind the wheel anyway and drove to a Russian Security Council meeting. The car managed to cover the 4-kilometer (2.5-mile) distance without stalling.

However, on the way to the launch of serial production, planned for in mid-2012, the Yo-mobil ran out of steam, even though it had 200,000 pre-orders. At the factory site near St. Petersburg, guards turn away all visitors, saying the project has been put on hold. The construction manager asks for discretion -- otherwise he says he'll have Russia's domestic intelligence agency, the FSB, breathing down his neck.

Prokhorov's car, which was unveiled at the 2011 International Motor Show in Frankfurt as "Russia's new symbol," is the latest example of a centuries-old tradition. Legend has it that Prince Grigory Potemkin, a favorite of Catherine the Great, had fake settlements erected to mimic prospering villages and fool the empress. Similar smoke-and-mirror tactics are still in use today.

Engineers have already presented "Russia's first smartphone" on two occasions. In September 2010, the head of the Russian Technology State Corporation gave then-President Dmitry Medvedev a rough prototype that was supposedly destined to be manufactured in Taiwan. But the world never heard anything more about it.

Two months later, Putin was handed a device that "had all the functions of an iPhone4" in the words of Russian telecommunications tycoon Vladimir Yevtushenkov. The oligarch promised an initial run of 500,000 phones, which was later reduced to 100,000. Chinese manufacturer ZTE pulled the plug on the project after only 5,000 units had been produced, citing "lack of demand."

A similarly disappointing performance came from an e-book reader praised by pro-government media as a "Russian iPad." Anatoly Chubais, head of the state-backed firm Rosnano, promised "a very large series production" when he placed the first workable prototype in Putin's hands in August 2011. A batch of 1,000 was distributed to Russian schoolchildren. The planned €700 million factory, though, remained just a pipe dream.

No Longer a Technological Power

Russia's lack of technological expertise is also jeopardizing the Kremlin's ambitious plans for the aviation and defense industries. The Superjet -- the first passenger jet developed in Russia since the end of the Soviet Union -- has virtually no prospective buyers. Sukhoi, its manufacturer, has so far built only about two dozen units. One of them crashed during a demonstration flight in Indonesia in May 2012, killing all 45 on board.

Just how much Russia's technology trails that of its competitors became painfully obvious in mid-October, when the FBI uncovered a suspected Russian smuggling ring. The alleged Russian spies apparently had little interest in politically sensitive information. Instead, according to the FBI, they managed to slip microelectronics past US customs authorities -- mass-produced goods that were suitable for use in "military systems" and apparently destined for the Russian army and intelligence services.

Russia has apparently given up on trying to manufacture these components itself. Moscow-based military analyst Alexander Golts recently complained in the English-language Moscow Times that Russian companies are "in no position to make use of advanced technologies." For instance, engineers working on the planned T-50 fighter jet, a fifth-generation stealth bomber, have been given strict orders only to install Russian high-tech components. But since there are not enough plasma displays made in Russia, "we just take Japanese monitors and relabel them," admits a member of the project team.

"Progress and modernization arise from efforts to become more efficient," Moscow-based economist Vladislav Inozemtsev recently said in a SPIEGEL interview. "That contradicts the entire logic of the Russian economy." In order to generate an economic output of one dollar, Russia uses 10 times as much energy as Germany. According to Russian government auditors, "due to corruption and weak management," every kilometer of newly constructed highway is two-and-a-half times as expensive to build as those in the European Union.

"Everyone knows that this is unacceptable," Inozemtsev says, "but they all remain satisfied as long as oil and gas revenues continue to flow."

Meanwhile, the Yo-mobil's future looks decidedly grim. Prokhorov, the project's billionaire backer, pushed the sales launch back two years, to 2014. Shortly thereafter, he announced he was retiring from business.

In a backroom of the factory near St. Petersburg, two German mechanical engineers are sitting and chatting. Dieffenbacher, an automotive parts supplier based in southwestern Germany, has sent them here to monitor the assembly of a plastic press weighing 200 metric tons that Prokhorov purchased to help build his dream car.

"Our machines are up and running," one of the Germans says with the knowing smile of a man who wouldn't say a bad word about his client. "If the Russians build the car here, it will be a revolution."