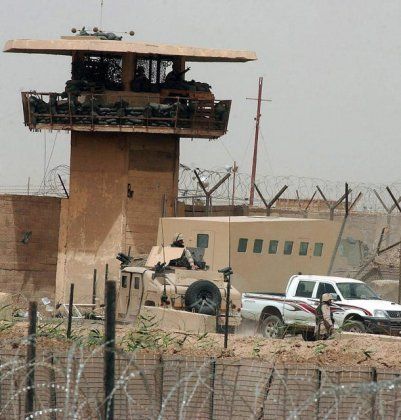 Iraq's Abu Ghraib prison is notorious for its images of torture -- under Saddam Hussein and later the United States.

When Saddam Hussein ruled Iraq with an iron fist, prisoners sat in windowless cells, they were tortured and the hangings took place on Mondays and Wednesdays. After the United States toppled the ruthless dictator's regime, prisoners were ritually humiliated, attacked with dogs, forced to cover themselves in feces, sexually humiliated and tortured.

The images that emerged of abuses at Abu Ghraib created outrage throughout the Arab World and came to symbolize what many saw as American disrespect towards Muslims. The Abu Ghraib disgrace has also served as a powerful recruiting tool for insurgents and terrorists. But Abu Ghraib will soon be a memory, albeit a painful one-- not only for the prisoners who had to live through it, but also the United States, whose mission of spreading democracy will long be tarnished by images of torture.

On Thursday, the American military said it would close the notorious Abu Ghraib prison located just west of Baghdad. "We will transfer operations from Abu Ghraib to the new Camp Cropper once construction is completed there," Lieutenant Colonel Keir-Kevin Curry told Reuters.

Washington hasn't given concrete dates, "but the plan is to accomplish this within the next two to three months," the military spokesman said.

Camp Cropper is a prison complex located at the US Army headquarters at the Baghdad Airport, which isn't far from Abu Ghraib. Right now, the prison holds, in the parlance of the Pentagon, 127 "high value detainees," including ex-dictator Saddam Hussein. The military is building a new detention center at Cropper to hold some of the 4,500 Abu Ghraib inmates. Others will be transferred to prisons in other parts of Iraq. The US military maintains four prisons in Iraq that hold approximately 14,500 prisoners, many of whom are suspected insurgents. More than half are being held at Camp Bucca in southern Iraq.

The US torture scandal at Abu Ghraib first emerged two years ago after US broadcaster CBS and New Yorker magazine first published photos of American soldiers abusing prisoners. The photos showed human pyramids of naked men, prisoners being forced to simulate sexual acts on one another, one prisoner with a collar around his neck being walked like a dog and other graphic abuses. The prison has been a blemish on the US presence in Iraq since the scandal broke. President George W. Bush even sought to destroy the complex until a US military judge declared it a crime scene and ordered that it be left intact.

After the prisoners are removed from Abu Ghraib, officials said, it will be turned over to the Iraqi government.

Earlier this week, human rights group Amnesty International criticized the US, saying it had learned little from its painful experiences at Abu Ghraib. "Three years after it toppled Saddam Hussein, the US-led alliance has failed to put in place measures that respect the basic rights of detainees under its control and to safeguard them from possible torture or other abuses," said Hassiba Hadj-Sahraoui, deputy director of Amnesty Internationa's Middle East and North Africa program. "The system of detention that has been established is arbitrary and a recipe for possible abuse." The organization also claimed that some detainees have been held for longer than two years without charges or the opportunity to challenge their detention.