Scientists agree that climate change is on the way. But what's it going to cost? In Germany alone the price tag will be immense: up to €800 billion. That, at least, is the latest prediction from the German Institute for Economic Research (DIW) released Wednesday.

The DIW economists have worked out the costs for Germany based on a simulation model of climate change. The result: Germans will have to spend an additional €800 billion by 2050 as a direct result of global warming. The damage caused by more extreme weather alone will cost the German economy an estimated €330 billion. And the report warns: "If there is not an appreciable intensification in climate protection, then by 2100 the resulting costs of climate change could reach €3 trillion."

The DIW study is based on the assumption that the average global temperature will increase by 4.5 degrees Celsius. That is the upper level of the forecast by the UN Intergovernmental Panel on Climate Change (IPCC). In February the body released a report based the evaluation of countless studies and models and came to the conclusion that the average temperature will rise by between 2 and 4.5 degrees Celsius by 2100.

The DIW findings are based on a range of different costs resulting from climate change. Direct damage will cost the economy around €330 billion, with the tourism, agriculture and insurance sectors most effected. For example, if temperatures increase by as much as 4.5 degrees Celsius, then German ski resorts will be "snow-free."

The projected increased energy costs will amount to around €300 billion, a lot of which will have to be born by private households. A further €170 billion will be required for measures to deal with the consequence of climate change, such as protection walls and dikes. 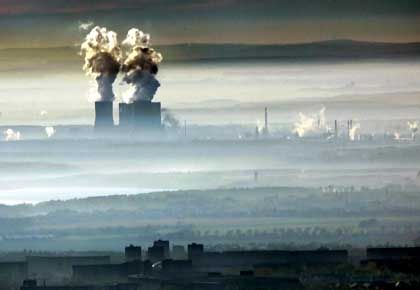 Germany is going to have to reduce its reliance on coal.

The researchers also took into account increased health costs related to a possible increase in tropical diseases in Germany and a rise in heat-related deaths in the second half of the century.

The institute predicts that the costs incurred will dampen economic growth by up to 0.5 percent a year over the next 50 years. And almost every economic sector will be hit.

This is not the first time the economic costs of global warming have been laid bare. In a report last November, the British government adviser Nicholas Stern recommended that one percent of national GDP should be set aside each year to offset the costs of climate change.